On the end of eggplant season and a seasonal riff on masoor dal. 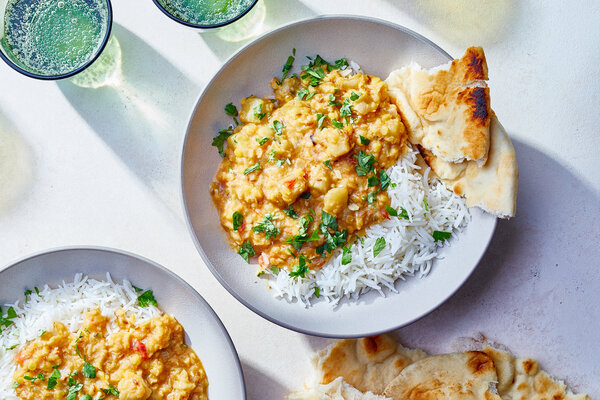 The end of tomato season always brings a collective cry of despair and a rush to eat as many juicy BLTs as possible before those nectar-filled heirlooms go the way of 8 p.m. sunsets and leaving the house without a coat. But there’s no such wailing at the end of eggplant season, which for me brings an even greater loss.

You see, out-of-season cherry and grape tomatoes are decent substitutes for cooking, if not sandwiches. But winter eggplants? Not so much. Summer and early fall is when eggplants are at their sweetest and most tender, before the onslaught of leathery skin and bitterness from their out-of-season, globe-trotting cousins.

So get them while you can, and then cook them in every possible way: roasted, charred, glazed, baba-ganoush-ed. I’m planning to try Kay Chun’s eggplant dal (above), in which the eggplant breaks down into a silky sauce surrounding earthy red lentils. It sounds like a perfect midweek dinner, maybe accompanied by slow-roasted tomatoes with olive and lime.

Eggplant not your thing? How do you feel about pizza? (That was a rhetorical question.) J. Kenji López-Alt has a fiery take on a barbecue chicken pie with his buldak pizza, inspired by Korean fire chicken. He rightly points out that both the chicken dish and the pizza make great late-night drinking food, particularly his broiled, tortilla-crust variation. Yum.

You know what else makes great drinking food? Beer cheese! Romel Bruno’s version is as creamy as fondue and just waiting for your chips or pretzel bites. You could serve it as a nibble before Ali Slagle’s latest, sweet-tart skillet meatballs with crushed fresh blackberries. Or for something weeknight- and pescatarian-friendly, Zainab Shah has a sheet-pan fish tikka with spinach that’s aromatic with spices and quick to make.

What’s for dessert? I’ve been meaning to try this Kentucky butter cake forever. Maybe now’s the time, and I can top it with sugared tart raspberries or any blackberries that didn’t end up in Ali’s meatballs. And you can’t go wrong with a creamy, classic vanilla crème brûlée.

You do need a subscription for access to the recipes — so many thousands upon thousands of them, with more on the way. Your subscription supports our recipe development, along with all the other behind-the-scenes activity that brings you New York Times Cooking. You can also find us on YouTube, Instagram and TikTok, where there’s the most soothing garlic confit video ever. Garlic always calms me down.

Here’s another calming activity: Watch two stuffed unicorns sway to Maurice Ravel’s Boléro. The musicians Toyah Willcox and Robert Fripp recorded this — and a slew of other D.I.Y. music videos — in their kitchen during the doldrums of the pandemic, in a brilliant series they called “Sunday Lunch.” (Here’s their cover of the Kaiser Chiefs’ “I Predict a Riot,” complete with dancing blue streamers.) Jon Pareles recently interviewed Fripp, also the guitarist and leader of King Crimson, about his singular take on art and life.

Creating wacky music videos was one way to get through those lockdown months. Adopting a pet was another. According to the A.S.P.C.A, 23 million American households adopted a cat or dog from March 2020 to May 2021. In The Times, Sarah Lyall interviewed the canine behavioral expert Alexandra Horowitz, who adopted a dog in the spring of 2020. Her new book, “The Year of the Puppy,” is a deep dive into canine development told from a distinctly intimate point of view — something that anyone with a dog in the family might want to check out.

I’ll see you on Wednesday.