A US aircraft carrier is likely to be deployed to South Korea’s east coast after Pyongyang’s ballistic missile test on Tuesday, a news report has claimed. While the crucial development about which ship has been sent has not been confirmed by the Pentagon, the Nimitz-class nuclear-powered supercarrier USS Ronald Reagan.

It was recently seen last week taking part in military drills with the South Korean navy.

Sky news reported that the flagship of Carrier Strike Group Five, the Ronald Reagan has a compliment of 90 fixed wing aircraft and helicopters.

US President Joe Biden and Japanese Prime Minister Fumio Kishida condemned North Korea’s test in the “strongest terms,” the European Union called it a “reckless and deliberately provocative action”, and UN Secretary-General Antonio Guterres condemned the launch and said it was a violation of Security Council resolutions.

The UN Security Council will meet on later today to discuss North Korea at the request of the United States, despite China and Russia telling council counterparts they were opposed to an open meeting of 15-member body. 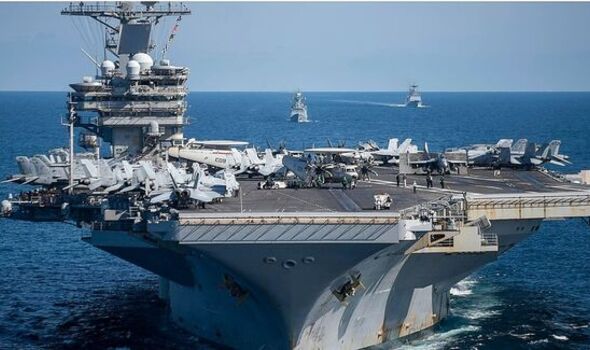 They argued that the council’s reaction should be conducive to easing the situation on the Korean Peninsula, diplomats said.

According to the reports, South Korea and the US have also been conducting firing and bombing drills in the Yellow Sea, including volleys of missiles.

The drills, which started on Monday off the Korean Peninsula’s east coast with the participation of the nuclear-powered USS Ronald Reagan aircraft carrier, came a day after North Korea tested another ballistic missile.

US Rear Admiral Buzz Donnelly, the strike group’s commander, said in a statement on Saturday said: “The Ronald Reagan Strike Group’s visit is of strategic importance to the US and Republic of Korea relationship and is a clear and unambiguous demonstration of US commitment to the Alliance.”

The South Korean navy said the exercises are aimed at demonstrating the allies’ “powerful resolve to respond to North Korean provocations” and improving their ability to perform joint naval operations.

It is the first US-South Korea joint military training involving a US aircraft carrier since 2017.

Pyongyang has condemned previous US military deployments and joint drills as proof of hostile policies by Washington and Seoul.

In response, the US and South Korean governments released a joint statement expressing concern about what they called “escalatory and destabilizing messaging related to nuclear weapons use” by North Korea.

“The United States reiterated its ironclad and unwavering commitment to draw on the full range of its military capabilities, including nuclear, conventional, missile defense, and other advanced non-nuclear capabilities, to provide extended deterrence for the ROK [the Republic of Korea/South Korea],” the statement said.