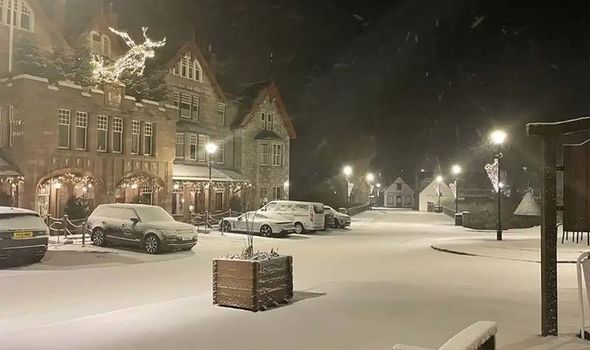 Shetland and parts of eastern Scotland along with the Yorkshire Dales saw snow. But for other parts of the country there were unseasonal highs of up to 11C. The Met Office said: “We have seen snowfall on Christmas Day, so it is officially a white Christmas.”

Tomintoul in Moray was among those areas to gain a festive fall.

In the South-west the mercury hit 11C but the Met Office issued a yellow warning for freezing conditions for parts of central and southern Scotland and north-west England lasting until midday today.

Road and rail passengers face potential disruption while there could be power cuts due to strong winds and snow on higher ground.

A flood warning has also been issued in parts of Northern Ireland.

However, some donned their Christmas hats to brave chilly waters for the traditional festive swim yesterday. Around 40 took a dip in the Serpentine in Hyde Park, London, for the annual 100-metre Christmas morning race.

At Portobello Beach, Edinburgh, swimmers wore elf outfits and tutus. There were similar scenes at Tynemouth Beach, Tyne and Wear.

At Felixstowe, Suffolk, the dip was cancelled at the last moment because of windy weather.

Around 500 spectators had gathered but two in costumes took the plunge before it was called off.

Get the latest three-day weather forecast where you live. Find out by adding your postcode or visit InYourArea