It has been asked many times in the build up to the Games – why is Japan still hosting them when the COVID-19 pandemic is still unfolding?

There are many reasons put forward by organisers – the athletes need them, the Olympic movement would lose too much money, Japan didn’t want to give up on them when China has the Winter Olympics in 2022 – the list goes on.

The one team competing under the Olympic flag have their own reasons.

Twenty-six of the 29 athletes on the refugee team may have been delayed arriving in Japan due to a COVID-19 case at their training camp in Qatar, but they are determined to take part.

Their goal is to inspire people in the most desperate situations and volatile countries on earth.

Yusra Mardini is one of their star swimmers. Tokyo will be her second Olympic Games on this unique team competing in a sport that saved her life. 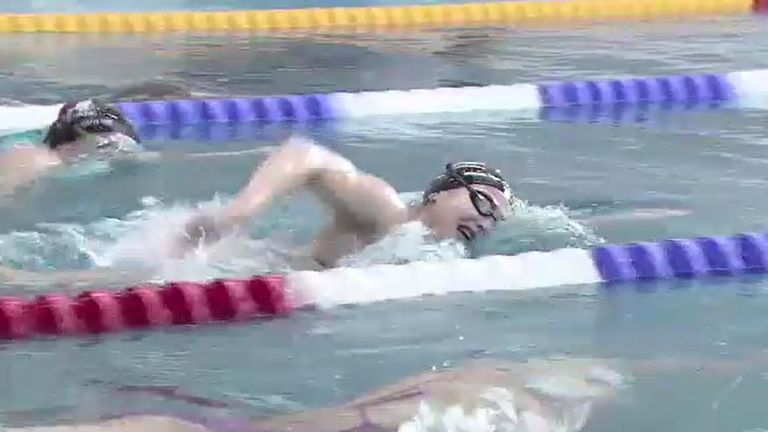 Her journey from Syria to Europe in 2015 was typically hazardous – an inflatable boat she was in with her sister began taking on water after the engine failed as they tried to cross the sea to reach Greece.

For three-and-a-half terrifying hours they tried to drag the boat through the waves to the shore of the island of Lesbos.

She is still scared of open water after the ordeal but has rediscovered her love of swimming in the stability of her new life in Hamburg.

“Swimming literally saved my life on the way to Germany by escaping from Syria. And when I came here, swimming helped me rebuild my life from zero,” she told Sky News.

“One really sad thing is that the number of displaced people in I think 2016 was 65 million and now it’s 82. So it’s just increasing… and yeah, we’re going to be representing all of those people around the world.”

She’s one of 29 athletes on the refugee squad in Tokyo which is three times bigger than the team that first competed under the Olympic flag in Rio in 2016.

In her first Games, Yusra won her heat in the 100m butterfly but it was not fast enough to qualify for the semi-finals.

Taking part though is about much more than simply how fast she swims: “The way I was raised in Syria, it was a bad thing to be a refugee… I still don’t like the word.

“But then I was like… a refugee means like a person who’s seeking a refuge, a place where they want to stay safe. And there’s nothing wrong with that.

“Fleeing your country by force to, you know, find a place to stay safe, to have a better future and to think about your kids already now and to think about building a happy family, a small house with a garden. There’s nothing wrong with that.

“And if people are not coping with refugees being successful and having good jobs, then I don’t think that’s our problem.”