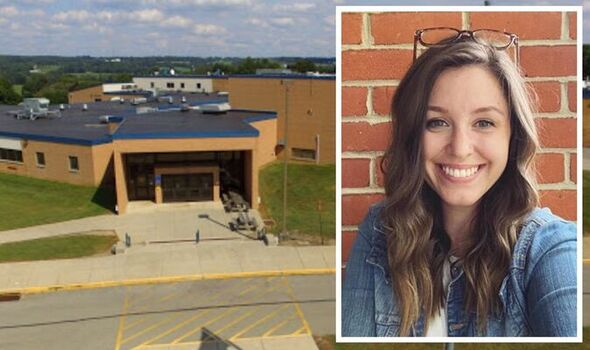 Olivia Lois Ortz, a choir leader from the Wilmington High School, in Pennsylvania, US has since been arrested on suspicion of having sex with her student. She has been charged with two counts of sexual contact with a 17-year-old school student and one count of sexual offence with a minor.

The husband had reported the findings to the school after he discovered the alleged incriminating evidence after returning home from a trip to Florida.

Ms Ortz was suspended from duty on May 9, with police issuing an arrest warrant on May 13, according to local media.

The teacher allegedly exchanged over 100 messages with the female student.

New Wilmington Borough Police Chief Carmen Piccirillo told KDKA “He believed that it was an adult male that she was having a relationship with.

“She told him it wasn’t what he thought.

“What certainly turned out to be accurate.

“And she ended up admitting that the letter was from a female student.”

Police also stated Ms Ortz and the student in question had set up a code word in case something bad happened.

Speaking to police following the discovery, the student claimed she would visit Ms Ortz’s home whilst her husband was away.

The student claims she stayed overnight whilst her husband was away.

She also said the pair had engaged in sexual activity on a number of occasions.

Following the execution of a search warrant by police officers, the student claimed the pair continued to communicate because they loved each other and needed to support one another.

Ms Ortz is charged with two counts of intercourse / sexual contact with a school student, and one count each of unlawful contact with a minor for sexual offences and criminal use of a communication facility.

The teacher handed herself over to the police following advice from her legal team.

According to police Chief Piccirillo, Ms Ortz was granted a bail bond out of Lawrence County jail for the sum of $150,000.

The arrest of Ms Ortz over her relationship with a student is not the first to rock Wilmington High School.

According to reports, he liked tickling the feet of female students and formed inappropriately close relationships with them.

Mr Priano, who faces ten counts of sexual assault and two counts of unlawful contact with minors, had a pretrial hearing set for June.