The 18-page report presented to reporters on sidelines of the Human Rights Council under way in Geneva. 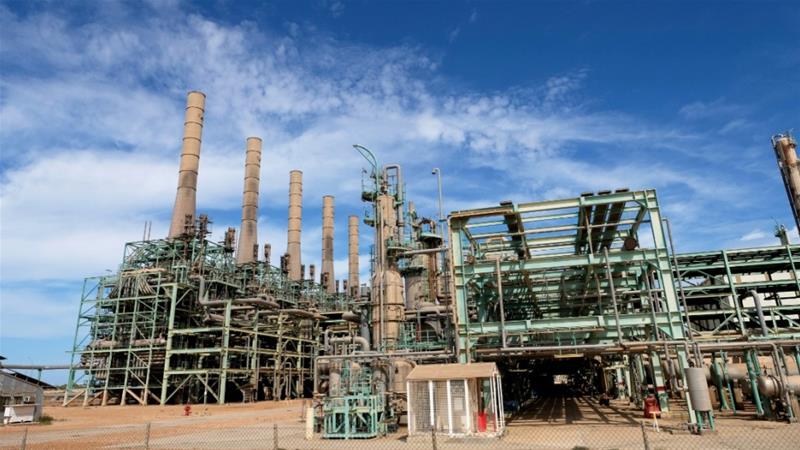 Geneva, Switzerland – An international criminal network with connections in Switzerland has been smuggling Libyan oil between 2014 and 2015, an investigative report revealed on Monday.

Commodity traders based in the Swiss region of Zug have been conducting illegal business transactions with Libyan militias smuggling oil from the Zawiya oilfield, east of Tripoli, through a Maltese company, said the report.

The document was presented to UN-based reporters on the sidelines of the Human Rights Council currently under way in Geneva, where the Libyan peace negotiations are also taking place under the auspices of UN special envoy Ghassan Salame, who resigned on Monday citing health reasons.

The 18-page report is the result of an investigation conducted by Trial International and Public Eye, two non-governmental organisations focusing respectively on fighting impunity for international crimes and studying the impact of Swiss companies on poorer countries.

The report shows that Swiss fuel trader Kolmar Group AG, with offices all over the world, received more than 50,000 metric tonnes of Libyan gas and oil diverted illegally between 2014 and 2015. The trade was conducted with the support of the company’s Maltese partners, Darren and Gordon Debono, the document said.

“Our findings show that the oil was stolen from a country at war,” said Montse Ferrer, senior legal adviser to Trial International. “The Swiss company may have committed the war crime of ‘pillaging’ under international law.”

Ferrer said the company has never answered requests for comment. Al Jazeera contacted the company but no answer was received at the time of publication.

Since the toppling of Muammar Gaddafi in 2011, militias and armed groups have challenged the UN-recognised Government of National Accord seeking control over the oil and gas fields and the smuggling networks.

The illegal trade of Libyan oil and gas results in huge profits ending in the hands of these armed groups that often control human trafficking from Libyan shores into Europe.

“If there is no purchaser at the end of the supply chain, there is no market and there is a loss of significant profit [and influence for the armed groups],” said Ferrer.

“Illegal oil trade has a direct impact on the negotiations going on here,” she added.

Ferrer said the investigation into the involvement of the Swiss trader is an offspring of an Italian police operation dubbed “Dirty Oil”, which first revealed the existence of the smuggling network in 2017.

Ferrer said Monday’s report clarified the role of the Swiss traders by relying on data of vessels’ movements, banking transfers, as well as direct sources.

Some of these sources are in Malta, said Ferrer, where journalist Daphne Caruana Galizia was also investigating fuel smuggling from the island before being murdered in 2017.

According to the document, the smuggling network was first uncovered by the Italian authorities. The Shuhada Al Nasr brigade, notoriously known for the extortion, abuse and exportation of migrants, allowed significant amounts of fuel to be diverted from the Zawiya refinery.

This fuel was extremely cheap because it was subsided by the Libyan National Oil Company (NOC) in order for Libyans to be able to buy it at affordable prices. The smuggling was led by Fahmi Ben Khalifa, whom a UN report in 2016 identified as the leader of the most active oil smuggling network in Libya.

The NOC did not approve these diversions. The fuel would be transported via truck to Zuwara and other villages in the north from where fishing vessels would take the fuel out to sea.

Off the coast of Libya, there would be ship-to-ship transfers on oil tankers charted or owned by the smuggling network. These oil tankers would then go to Malta where they obtained legalised paperwork, and the cargo sold at significant discounts.

“The focus of our investigation was one of the smuggling network’s customers, the Swiss commodity trader,” said Ferrer.

The report said at least three vessels dropped off 50,000 metric tonnes of Libyan gas oil in at least 22 separate instances, in storage tanks leased by Kolmar in Malta.

“The company received paperwork for this cargo, including certificates of origin, saying that the oil was from Zawiya,” said Ferrer. “Bank statements show that payments of at least $11m were transferred from Kolmar to companies belonging to the smuggling network.”

Agathe Duparc, who is in charge of the investigation for Public Eye, said these operations show some Swiss companies do not conduct sufficient or any due diligence prior to entering high-risk business transactions.

“We believe the Swiss authorities should take action to make sure that commodity traders do not take advantage of grey areas in the Swiss legislation to conduct illegal trading,” she told reporters.

Asked whether the Swiss authorities were taking any law enforcement measure against Kolmar, Duparc said they did not.

In the meantime, Italian authorities are prosecuting the Debonos and Ben Khalifa for transnational conspiracy to launder gas oil of illicit origin and fraud.

Trial announced it is now considering legal action against the Swiss trader for the crime of pillaging under the international law.