Storm Ellen is next on the Met Office’s schedule of storm names and will follow last weekend’s Jorge at some point in 2020. The agency only names storms which pose an elevated risk to the UK, commanding wind and rain with potentially disastrous consequences.

Weather forecasters with Severe Weather EU recently detected a “very large low-pressure system” has taken residence in the North Atlantic which could serve as a suitable Storm Ellen candidate.

Experts believe the system is a “developing severe weather threat” which is currently growing as it moves across southeast Canada.

They state as the system extends its influence over the region, it will cause a knock-on effect in Europe, which could receive severe winds and high swell.

Ireland, Scotland and France could see the effects by this weekend, as some of the worst conditions arrive on Sunday. 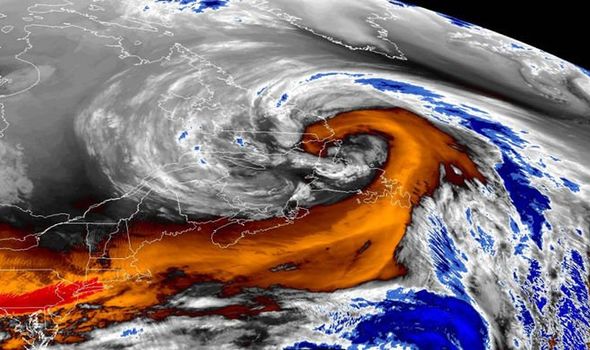 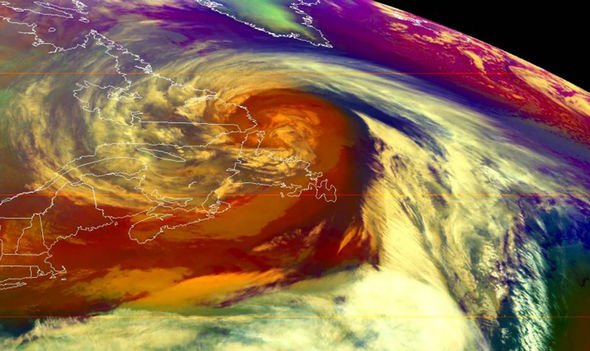 According to the weather forecasters, the system will enter Western Europe on Saturday, bringing with it severe winds and high waves.

They said: “The conditions will begin worsening on Friday night as the North Atlantic cyclone comes closer to western Europe, entering Ireland on Saturday morning.

“Although the system will not be extremely deep – likely around 970 mbar in its centre only – the system itself will be very large, generating a broad wind field and across a few days span.

“The broad centre of the circulation will be slowly drifting northeast across the North Atlantic, between the UK and Iceland.” 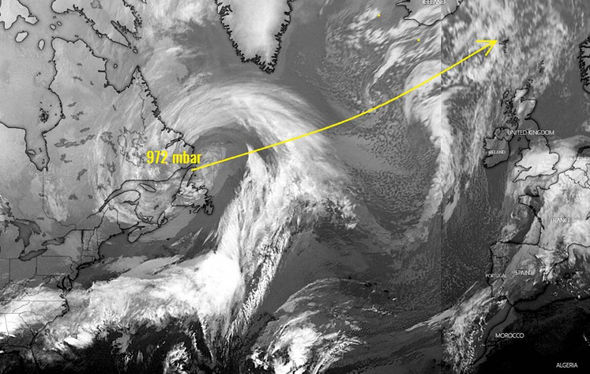 “So both regions will be affected with severe winds and high waves – the UK/Ireland with warm westerlies, Iceland with cold easterlies on the northern side of the low.”

Severe Weather EU added the severe weather could continue into next week.

They said: “It appears likely the severe winds and high waves/swell threat should continue into next week, as global models are trending towards even deeper troughs over the North Atlantic and northern Europe, resulting in deep cyclones into western Europe.”

The Met Office currently has no warnings in place for the UK this weekend, but the agency’s long-range forecast suggests the bluster which defined much of February will continue into March. 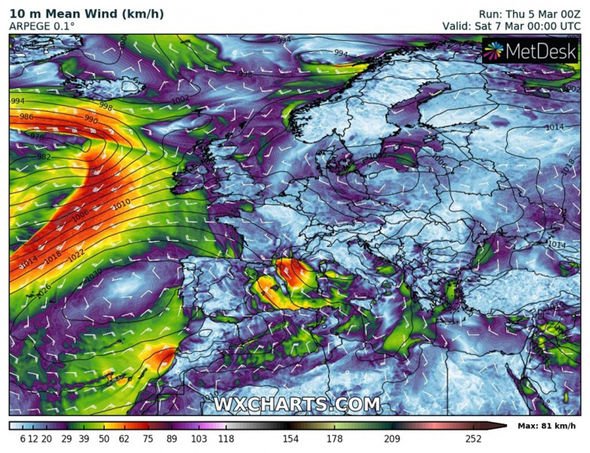 The forecast, which runs from March 10 to March 19, predicts conditions will remain “unsettled” into next week.

The agency also advised of further incoming risks from gales and rain, especially on the coast.

They said: “Tuesday should remain unsettled with a risk of coastal gales and further rain, particularly in the west where it could be heavy and persistent and times.

“Looking ahead to Wednesday and Thursday, the UK is likely to see spells of rain interspersed by brighter and showery interludes, with the wettest of the weather in the west.

“It will often be windy with gales possible in the northwest.

“The rest of the period should continue the unsettled theme, with spells of wet and windy weather, and a potential for snow over higher ground in the north, interspersed with sunshine and showers.

“Temperatures are likely to fluctuate around normal, with occasional overnight frost.”