Claire Saffitz has tips and recipes for a perfectly fluffy dessert that’s as good alone as it is paired with supple summer fruit. 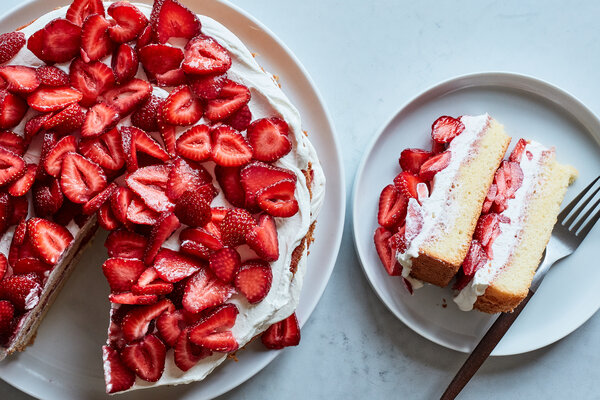 Sponge cake doesn’t typically fall high on people’s list of favorite desserts. Its name doesn’t stir the heart, and so often it’s dry and tasteless. But, when properly made, sponge cake is tender and bouncy with a cloudlike crumb that deftly soaks up the flavors of whatever it’s paired with, like whipped cream, coffee or fruit. 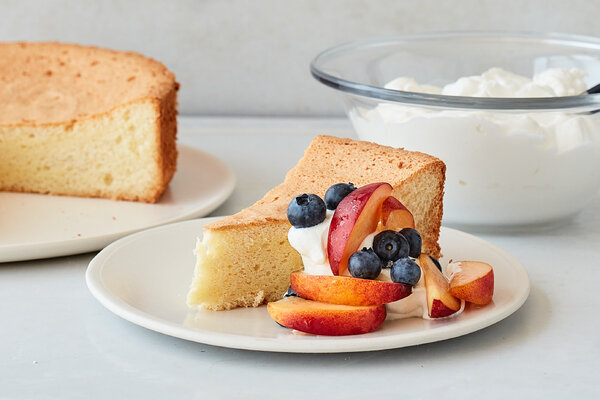 With so few functional ingredients (eggs, fat, sugar, flour), sponge cake literally rises and falls on its proportions. Change one thing, and the balance may be disturbed. It took dozens of eggs and double-digits attempts, but this recipe strikes the ideal balance between structure and tenderness. It’s a hybrid of both chiffon and génoise cakes, but has the most in common with the oil-based sponge cakes frequently found in Asian bakeries.

Just as the proportion of ingredients is crucial, so is the way they’re combined. This recipe streamlines the process as much as possible, requiring just a couple of bowls and a hand mixer. (Not required: Sifting, a double boiler or cooking a sugar syrup.)

Below are some of the core concepts and techniques for a successful sponge cake. And though the process is sensitive, the recipe is sound — even easy. The sponge doesn’t need a syrup or flavoring to be palatable, though it would feel right at home in trifles, layer cakes, roulades and tres leches. Think of it simply as the ideal base for all of your summer stone fruit and berry desserts.

Say No to Nonstick

Nonstick bakeware seems to offer added convenience compared with regular bakeware. But this isn’t really the case. The dark synthetic coating that makes bakeware nonstick absorbs more heat and often overcooks the sides and bottom before the center is fully baked. (That’s why most bakers prefer lighter-colored bakeware made from anodized aluminum.) Nonstick bakeware is especially ineffective for egg foam-based cakes, like sponge and angel food, because they can’t cling to the sides of the pan as they bake, preventing them from rising properly and causing them to collapse immediately upon cooling. This is also why you don’t want to grease the pan, since the cake needs to be able to grip the sides as it rises.

Like chiffon cake, this sponge cake calls for oil as the fat. Butter is solid at room temperature, so a butter-based cake firms up when it’s chilled. A sponge made with oil, however, stays flexible at any temperature and resists drying, so you can store it in the refrigerator for several days and it will maintain a supple texture. Olive oil or any neutral oil will work here.

There’s No Substitute for Cake Flour

Sponge cake batter is filled with tiny air bubbles from whipped egg whites and yolks. As the cake bakes, these air bubbles heat up and expand, lifting the cake to a light, spongy texture. At the same time, a critical mass of flour must be present to produce gluten (which happens when two proteins in flour interact with water), because gluten creates the internal scaffolding of a cake. Cake flour is the right flour for the job. It’s lower in protein than all-purpose flour, meaning it produces a relatively weak gluten matrix (and therefore a tender cake), but it’s still enough to support the airy crumb.

Use a Hand Mixer

A stand mixer boasts superior power over a hand mixer, but a hand mixer has one major advantage here: It allows you to use multiple bowls simultaneously. A stand mixer is fixed, so when you need to whip or mix multiple components — as you do the whites and yolks in sponge cake — you have to mix one, transfer it to a separate bowl, then wash the mixer bowl before proceeding. With a hand mixer, you can also use wider bowls of any size, making folding much easier, and can move the beaters around for even mixing.

When egg whites are beaten with sugar, the proteins in the egg unfold and link up, forming a semistable foam called meringue. When making meringue, the sugar is typically added to the egg whites after they’ve been beaten to soft peaks, but adding it at the very beginning prevents the proteins from fully unfolding, resulting in a finer foam with smaller air bubbles. In sponge cake, this type of meringue prevents lots of larger air bubbles from forming, which would expand too quickly in the oven and pop before the cake is set, causing it to fall. A finer foam with more uniform bubbles leads to a more evenly textured cake.

Cool the Cakes Upside Down

When a sponge cake comes out of the oven, it’s extremely delicate and must release steam as it cools in order to fully set. The weight of the sponge would cause it to collapse onto itself if left upright, forming a crater. To prevent this, the sponge should be immediately inverted while still in the pan and left to cool completely upside down. The pan’s ungreased surfaces act as grips for the cake and ensure it doesn’t fall out onto your counter when flipped.