Former king will be stripped of his royal emolument over allegations of kickbacks from Saudi Arabia. 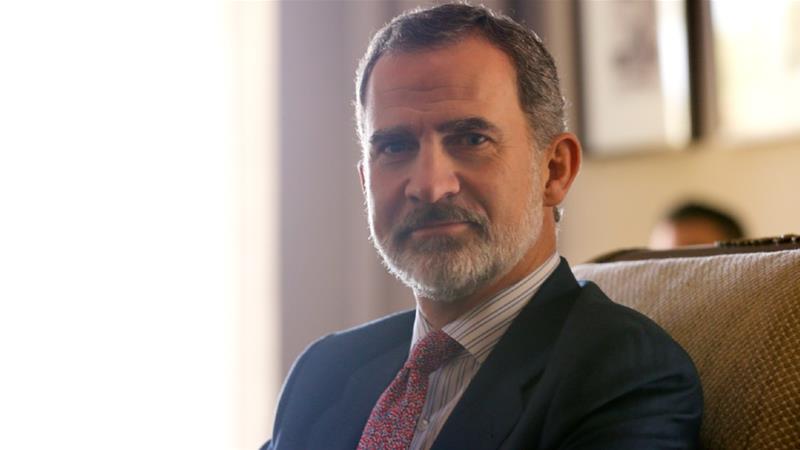 Madrid, Spain – King Felipe VI of Spain has moved to distance himself from his scandal-hit father by stripping the senior royal of his allowance and renouncing an inheritance from the former monarch.

The Spanish royal household made the announcement after media reports named Felipe as a beneficiary of an offshore fund set up by his father, Juan Carlos, in 2008.

The left-wing Unidas Podemos party, which forms part of the coalition government of Spain, called on Monday for a parliamentary inquiry.

The controversy will damage efforts by King Felipe, 52, to re-establish the credibility of the monarchy which faced calls for its abolition towards the end of his father’s reign.

Juan Carlos abdicated in 2014 after a series of scandals which plunged the popularity of the royal family to its lowest since the restoration of the monarchy in Spain after the death of dictator General Francisco Franco in 1975.

The reported offshore account, understood to be named the Lucum Foundation, held approximately 65 million euros ($72m) in funds that were described as a donation from the king of Saudi Arabia, according to a report at the weekend by the Sunday Telegraph, a British newspaper.

The account was set up in Panama and tied to an account with Geneva’s private Mirabaud bank, the newspaper added.

La Tribune de Geneve, a Swiss newspaper, reported that prosecutors believe the $100m fund could be linked to alleged kickback payments paid to Juan Carlos in business deals between Spain and Saudi Arabia while he was king.

The paper reported $65m of the fund was given by Juan Carlos to his former mistress, Corinna zu Sayn-Wittgenstein, a businesswoman who lives in London and Monaco.

Maria Cartagena, of Unidas Podemos, told Al Jazeera: “Today Spain’s priority is to control the expansion of the coronavirus and nothing must distract from that. However, this matter of the king will require an investigation in parliament.”

But the latest scandal is unlikely to lead to constitutional change in a country in a state of emergency and near-lockdown.

Pilar Eyre is a Spanish journalist and author, whose 2012 book The Loneliness of the Queen claimed Juan Carlos had a series of affairs.

“I do not think political parties will seriously be thinking of pushing for a republic right now. Apart from the coronavirus, the political situation in Spain is too unstable,” Eyre told Al Jazeera.

“To call for a referendum on the monarchy would require a change to the constitution and we are not in a position to do this right now.”

In a statement last April, the Spanish royal household said King Felipe had become aware of claims he was the beneficiary of the Lucum Foundation and later swore before a lawyer that he would renounce any benefits from the fund.

Former King Juan Carlos also said he had never told his son that he was a beneficiary of the two funds.

Since taking the throne, King Felipe has reformed the monarchy by banning family members from taking part in business, making its accounts more transparent and reducing its members to his own close family.

However, these efforts were hampered when his sister Princess Cristina and her husband Inaki Urdangarin went on trial in 2017 over a financial scandal.

Urdangarin currently is serving five years in prison for embezzlement, fraud and tax evasion, while Princess Cristina was cleared of tax fraud.