A local business owner said: “The situation is quite dramatic in the sense that it’s been several years without rain and we’re hitting rock bottom.” As Andalusia, one of Europe’s hottest and driest regions, struggles through the summer’s difficult weather conditions, Francisco Bazaga added: “If it doesn’t rain, unless they find some alternative water supply, the future is very, very dark.”

The Viñuela reservoir is key to the area both because of its hydraulic project — the natural premises make up the highest-capacity reservoir in the province of Málaga — and its appeal to tourists.

It is surrounded by facilities for water sports, barbecue and recreational areas, several hiking trails and hospitality businesses.

But remnants of a rental shop at the reservoir recently disappeared with the water, which is at a critical level of 13 percent – and Mr Bazaga, from a nearby restaurant, fears a similar fate.

Spanish reservoirs are at just 40 percent of capacity on average in early August, well below the 10-year average of around 60 percent, official data shows. 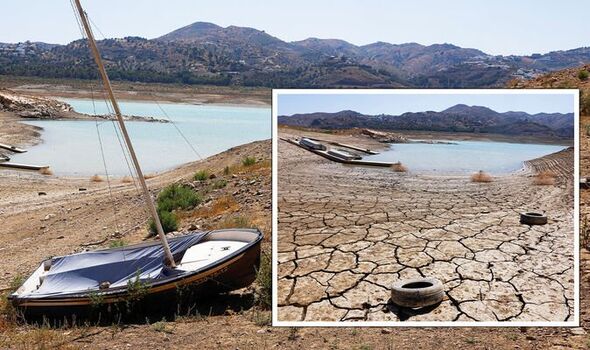 A prolonged dry spell and extreme heat made July the hottest month in the country since at least 1961.

Energy Minister Teresa Ribera said on Monday: “We are in a particularly dry year, a very difficult year that confirms what climate change scenarios have been highlighting.”

Addressing a news conference, she also highlighted that drought was leading to devastating wildfires.

Spain is estimated to have lost more than 200,000 hectares of land to fires so far this year – 80,000 of them during the July heatwave and the one that preceded it in June.

Emergency crews on Saturday struggled to contain six blazes that ravaged large tracts in Galicia, the northwest, as a third summer heatwave grips the Mediterranean nation. 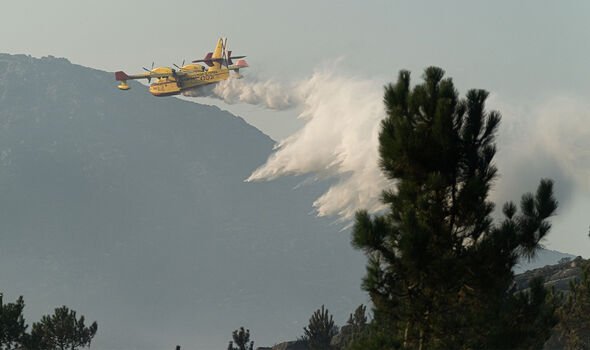 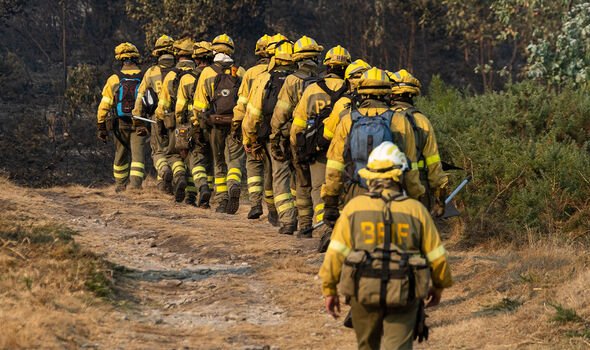 Nearly 3,000 hectares were scorched by the flames.

Some 700 people were evacuated from the area around Boiro, where a blaze broke out last Thursday, according to regional officials.

The dry, hot weather is likely to continue into the autumn, Spain’s meteorological service AEMET said in a recent report.

Elsewhere in Europe, heat is a problem too. 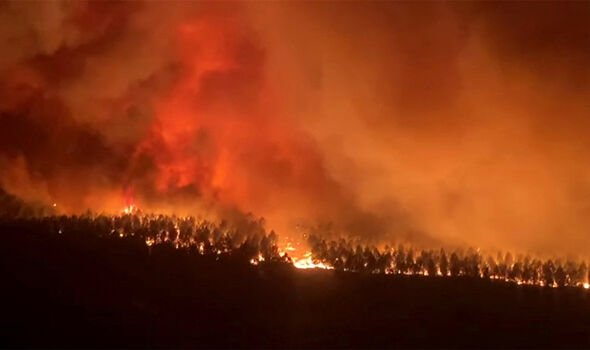 Get the latest three-day weather forecast where you live. Find out by adding your postcode or visit InYourArea

In southwestern France, a huge wildfire that destroyed more than a dozen homes and forced the evacuation of thousands of residents was sweeping through the Gironde region on Wednesday.

More than 1,000 firefighters backed by water-bombing aircraft were fighting the fire that has razed more than 6,000 hectares and is still burning out of control.

Camille Delay fled her home town of Hostens on the orders of emergency services late on Tuesday as a wall of flames drew rapidly closer.

She said: “Everyone in the village climbed onto their rooftops to see what was happening – within 10 minutes a little twist of smoke became enormous.”

The 30-year-old told Reuters she, her son and her partner had grabbed their two cats, chickens and house insurance documents and gone.

The local Gironde authority described the blaze as “rampant”, while firefighters said more evacuations were likely.

The Gironde was hit by major wildfires which destroyed more than 20,000 hectares of forest and temporarily forced nearly 40,000 people from their homes last month.

Authorities believe the latest inferno was a result of the previous fires still smouldering in the area’s peaty soil.