Snow has been falling across the UK for the past few days, with some areas seeing up to 11 inches of snow. But could it continue to snow this weekend? Some parts of the country could see even more snowfall on Sunday.

The Met Office warned that frosty easterly winds made the UK “bitterly cold” earlier this week.

Storm Darcy has been passing the top of Europe, with the outskirts of the storm laying siege to the UK.

Yellow warnings have been in place for separate parts of the country since the start of the week.

That means there could be a risk of travel disruption and some communities being cut off. 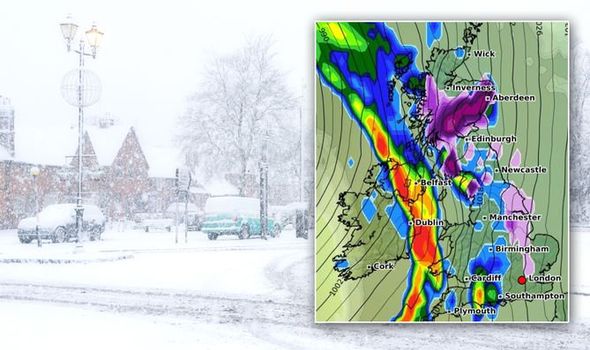 A fresh burst of snow is set to arrive in the UK from the Atlantic Ocean this weekend.

Snowfall will first arrive in Northern Ireland on Saturday morning, and will continue across the Irish Sea into the evening.

Scotland and the northwest of England are set for snow in the early hours of Sunday morning.

By mid-afternoon, parts of Liverpool, Manchester and Birmingham could start to see some snow, according to WXCharts.

Northern parts of London may also get some snow on Sunday night, at the end of the weekend.

The Met Office also has a number of yellow warnings in place for snow and ice on Saturday.

Wales, Northern Ireland, parts of Scotland, and the northeast of England have been told to prepare for icy conditions this weekend. 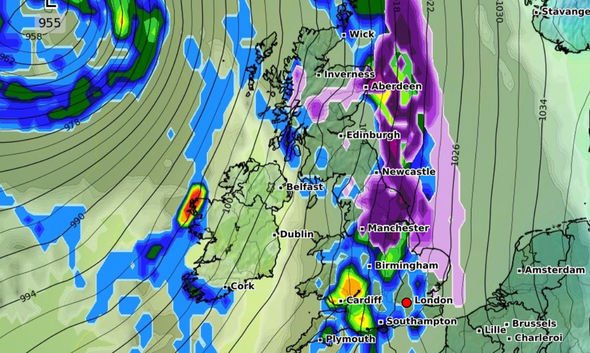 “Some roads and railways are likely to be affected with longer journey times by road, bus and train services.

“[There will probably be] some icy patches on some untreated roads, pavements and cycle paths.

“[Expect] some injuries from slips and falls on icy surfaces.”

The UK recorded its coldest temperature this week in more than 25 years.

Scotland reported an overnight temperature of -23C on Thursday morning.

The freezing temperatures have been caused by cold air from the Arctic and Siberia.

Earlier this week, police had warned of “blizzard-like conditions” in some parts of the country.