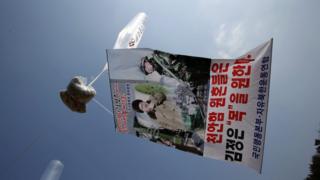 South Korean activists have sent tens of thousands of leaflets across the border on helium balloons for the second time in three days, denouncing North Korean leader Kim Jong-un.

Balloons carrying such messages and urging the country’s citizens to defect are regularly launched by defectors, conservatives and religious groups.

The authorities have stopped them in the past, citing public safety.

Many locals, concerned about possible attacks from the North, also oppose them. The latest balloon protest comes amid heightened tension on the peninsula.

The balloons sometimes also carry dollar notes, and even chocolate snacks. In 2014 North Korean soldiers attempted to shoot them down, leading to an exchange of fire across the border.

The launches come at a time of heightened tension between the Koreas. The North has carried out a banned nuclear test, satellite launch and numerous missile firings this year, while the South has pulled out of the Kaesong jointly-operated industrial zone and is carrying out one of its largest-ever joint military drills with the US.

The North occasionally flies its own propaganda leaflets south too, and the South Korean military has loudspeakers near the border, broadcasting a mixture of political and pop content north.