A ‘super-spreader’ from a reclusive church has caused anger, divided public opinion and spurred conspiracy theories. 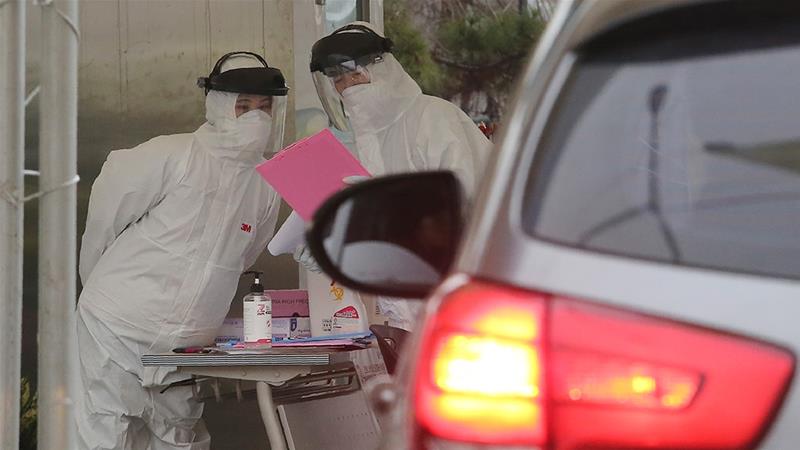 Seoul, South Korea – In the space of a couple of weeks, South Korea has gone from dealing with a few cases of coronavirus to thousands and now finds itself in the throes of an outbreak that has become the largest outside China.

It is a story that is slowly clarifying: A single “super-spreader” known as “patient 31” – a member of a fringe church called Shincheonji – is thought to have caused the rapid rise in cases. Now, the Seoul Metropolitan Government has filed a formal complaint against the congregation, accusing it of murder.

At least 29 people have died in the outbreak and more than 4,800 people formally diagnosed with the virus as of March 3.

“The situation here was not really serious until mid-February. It began to get very serious starting with patient 31,” said Hwang Seung-sik, a spatio-temporal epidemiologist at Seoul National University.

“Before patient 31, our strategies to contain the virus were working. But after countless people were infected by patient 31, it became very difficult to control.”

COVID-19 is affecting more than people’s health: Cafes and small businesses have closed their doors, college graduations have been permanently cancelled, after-school tutors have been laid off and major, life-changing job exams have been postponed.

The worst of it is in Daegu, a southeastern city where roughly 70 percent of confirmed cases are concentrated. Apart from the queues to buy the few remaining disposable face masks, the crowds of shoppers have disappeared.

“I’m really worried about an economic downturn,” said Yoon Gi-yong, a 22-year-old university student who lives in Daegu. “A lot of shops here are closing their doors, and my boss lamented to me that business is really bad these days.” 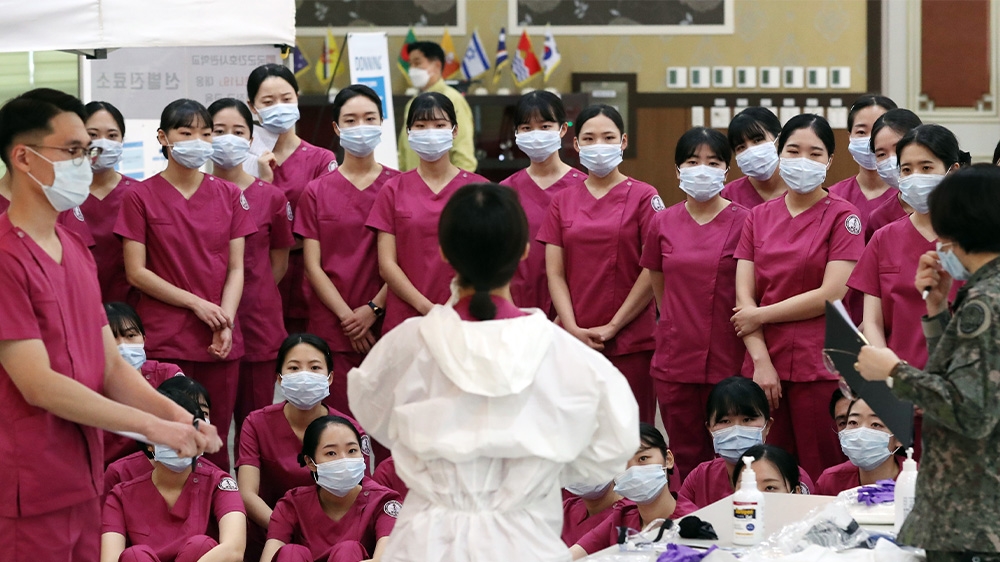 Yoon himself was told to stay home for at least a week to avoid getting infected – no hours at his part-time job means no pay, either.

Meanwhile, another part-time worker at a smoothie shop near Seoul has been out of work for a week now and is worried her dreams of a job with an airline will never take off because of COVID-19.

“My graduation [from flight attendant school] was permanently cancelled, and I heard that almost all the airlines will not be hiring new staff this year because of profit losses over coronavirus,” said YJ, a 26-year-old who asked to conceal her name. “I am so disappointed. What am I supposed to do?”

Anger at the church

The coronavirus outbreak has become an increasingly delicate issue: The Korean Society of Virology, as well as several individual South Korean virologists, declined to be interviewed – citing the issue’s “sensitive nature” – and several other people said they did not want their name associated with the outbreak.

Despite that, many seem satisfied with how the Korean government has been handling the virus. Compared with other countries such as Japan, coronavirus tests have been readily available, some people even getting tested at drive-through centres staffed with medical workers in white hazmat suits.

At the weekend, President Moon Jae-in’s administration unveiled a support package that included more than 7 million masks for Daegu residents and tax breaks for businesses suffering as a result of COVID-19.

“The first two weeks were really the golden time – the important time when we prepared test kits for each medical institution,” Hwang said, adding that “South Korea has been doing very well in following rules” set by the World Health Organization’s legally-binding International Health Regulations agreement.

But when it comes to the Shincheonji Church, people seem less pleased. Shincheonji has become the punchline in jokes and memes online, with online conspiracy theories accusing the church’s conservative leaders of purposely spreading the virus to undermine President Moon’s liberal administration ahead of the April 2020 general elections.

Those conspiracies were further fuelled when the church’s leader, Lee Man-hee, held a press conference on March 2. While bowing on the ground to apologise for the outbreak, Lee revealed his watch, which was decorated with the Blue House seal and signed by the previous, impeached, president, Park Geun-hye. 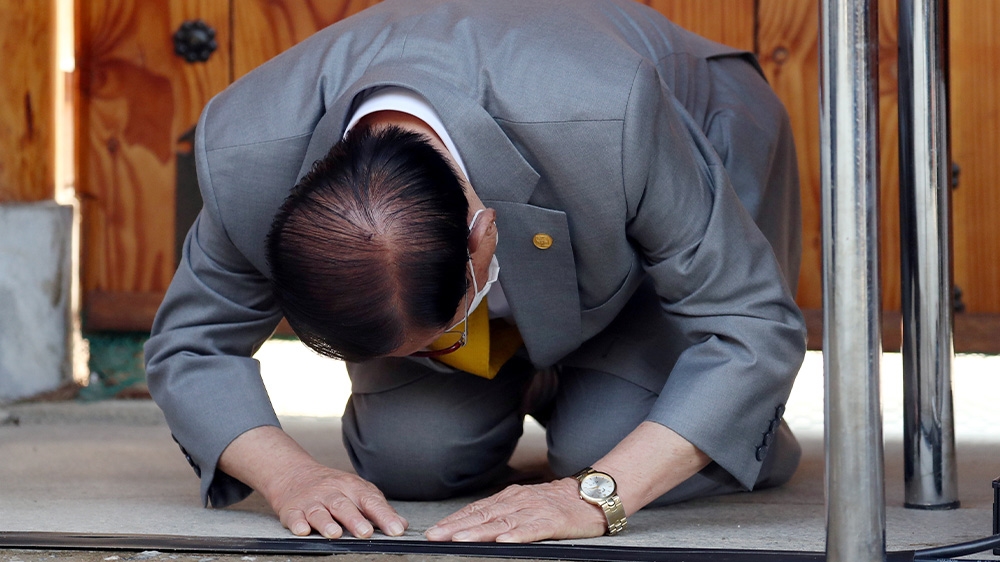 “I am very angry with Shincheonji. They have done the opposite of what South Koreans have wanted them to do. I think they have been lying about various pieces of information, like their location or their activities,” said Park Joon-young, a 21-year-old university student living in Daegu.

“I am suspicious,” Park added. “I have no idea how that many people could possibly become infected from a church. I almost wonder whether they’ve all been kissing each other.”

In a formal statement sent to the media, Shincheonji denied allegations that it had failed to cooperate with the South Korean government to prevent the spread of COVID-19.

“We make it clear once again that we did not intend to delay providing the list of congregants or hide it. But it is true that providing such a list was not an easy decision for Shincheonji Church of Jesus,” the statement read. “We are deeply sorry for infections caused by some congregants who were hesitant to reveal their affiliation with Shincheonji at first… We ask for your understanding once again.”

But in its epicentre in China, new cases have begun to slow – Tuesday’s number was the lowest since January – and experts say the situation in South Korea could also start to get better.

“Many health experts are saying that South Korea is passing the worst point of the crisis this week, and it really is,” Hwang said. “We are almost done testing all Shincheonji members for the virus. So, even though the number of cases is rising this week, I think we can get the current situation under control so long as the rate of new cases slows down.” 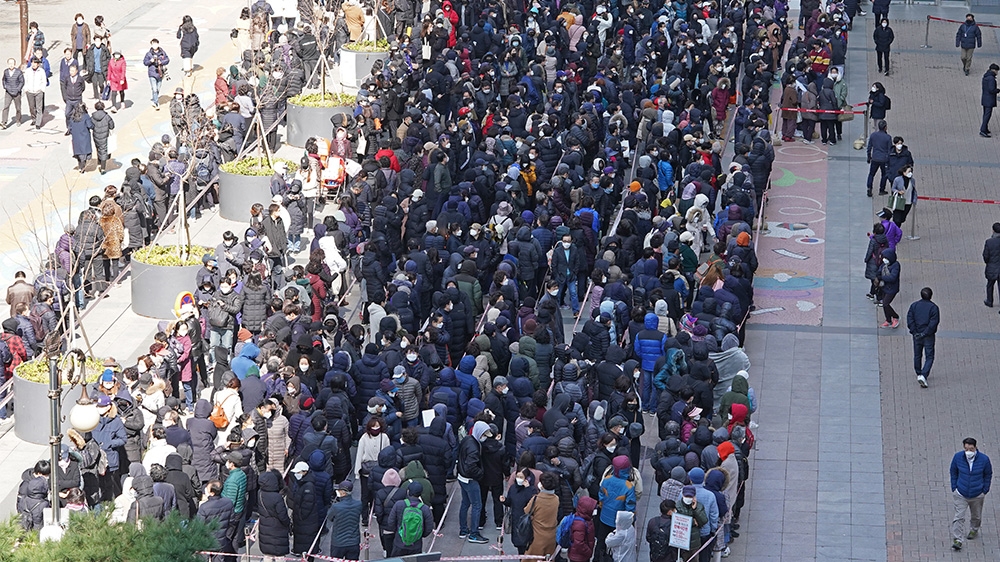 Patients with overall good health and mild coronavirus symptoms are being told to treat the virus at home. Meanwhile, hospital workers are pooling their resources to focus on the most vulnerable segments of the population – the elderly, the critically ill and those with pre-existing conditions such as asthma or heart disease.

In Daegu, residents are doing what they can to stay safe until the virus dies out.

“Most people are reluctant to go outside and meet others. There are noticeably fewer people downtown,” Park said. “I heard the supermarket in front of my house more than tripled in sales. I’m buying food and supplies in advance because I don’t want to leave my house.”

“If I do need to go outside, I’m wearing a mask and I’m using hand sanitiser regularly,” said K Roberts, a 31-year-old English teacher living in Daegu. “If I go outside for a longer period of time, I wear disposable gloves… But I’ve still been going out to supermarkets, there are still a lot of cars on the street and people are out and about. We are not a city on total lockdown.”

For now, medical experts urge the South Korean public to keep up the safety measures to ultimately weather the storm.

“I think it is impossible to develop the vaccine by winter but I think it’s possible to see a vaccine being used on people in the second half of next year,” Hwang said. “That means we should endure this winter without a vaccine, and we should keep doing everything possible to prevent ourselves from being infected.”