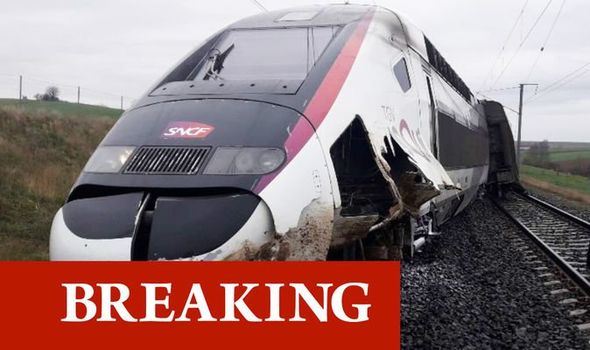 The TGV that linked the two major cities in France, left the northern French city at 7.19am but derailed just 30km into its journet at around 7.30am at Ingenheim, in the Bas-Rhin. SCNF – the company operating the train – told Franceinfo the front of the TGV appeared to hit something, which the firm called a “rare event”. Emergency services , including ten fire engines and ambulances, have rushed to the scene.

A spokesperson for the SNCF said: “As far as we know, there are no serious injuries among passengers.”

Other trains were being re-routed and there was no interruption to services, the spokesperson added.

A passenger travelling in the train told France Bleu she “felt a great shock”, as if the train had hit something”.

He said nobody appeared to be injured in his carriage, but that the windows has been cracked.

Another passenger travelling from Strasbourg, told off his “very great shock” when the train derailed.

He said: “The train trembled, the outside windows cracked and it came off the rails.”

The passenger said the first four carriages of the high-speed train left the rails.

In 2015, a test train derailed near Eckwersheim in Bas-Rhin – 11km north of Strasbourg – killing 11 people and injuring 40.