With the help of bush pilots, residents of remote Alaskan villages are increasingly using DoorDash, Uber Eats and other food-delivery services.

App-based delivery services are making it easier for rural Alaskans, who live far from stores or restaurants, to order their favorite takeout foods.Credit…Kerry Tasker for The New York Times

ANCHORAGE, Alaska — Robert Golike said he feels like the world’s most expensive food-delivery driver — but that’s probably because he uses a Cessna.

On a recent morning, Mr. Golike, a pilot for Alaska Air Transit, was on the tarmac of Merrill Field, loading up a nine-seater plane with mail, produce and diapers, among other freight. He was set to fly those essentials to the Upper Kuskokwim region, more than 200 miles away.

But also on board was perhaps the most eagerly anticipated cargo: two DoorDash orders. One was steak tacos and churros from Pedro’s Mexican Grill in Anchorage, and the other an array of Chinese takeout classics from Famous Wok, including lo mein, beef broccoli and General Tso’s chicken.

Awaiting the delivery on the other end were Natalia Navarro and her family, who look forward to their “city food” fixes with relish.

“You can order anything you want,” Ms. Navarro said. “And once you get it, you really, really savor it.”

But before they could dig in, the pilot first had to ferry the order on the long air journey over the silty waters of Cook Inlet, the craggy snow-covered peaks of the Alaska Range and the lake-pocked terrain near the airstrip in Nikolai where he would land. 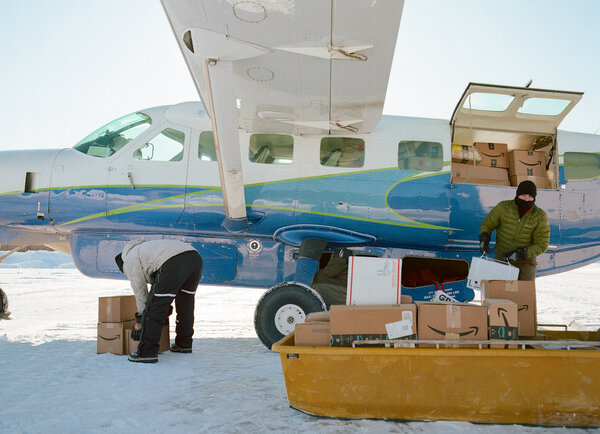 There, the box of food (only slightly crushed) was passed on to Ms. Navarro, 29, who works as a health aide at the village’s clinic. There are no grocery stores or restaurants in that community of fewer than 100 people, so once or twice a month her family orders from DoorDash to break the monotony of chicken- and moose-based soups and stews.

After microwaving their order, which had been delivered to the Anchorage airport the previous afternoon, Ms. Navarro and her family dug in.

It wasn’t quite the same as eating city food in a city, she said, “but it’s kind of nice to have the option to have something like that sent out. It’s not hot. It’s not fresh. But at the same time, it has the flavor you’re wanting.”

To satisfy such cravings, an intricate supply chain of delivery drivers, airline office employees and pilots help bring a taste of the city to bush and tundra. Alaska Air Transit is one of dozens of small regional airlines flying people and cargo to hundreds of remote communities across Alaska — everyday essentials like Netflix DVDs, outdoor gear and groceries, but also pizzas, Big Macs and tightly wrapped containers of pho.

Supanika Ordonez says that five years ago, when she lived in Fort Yukon — a village just north of the Arctic Circle, along the Yukon River — it was a thrill to get pizza from Fairbanks, 140 miles away. There was nowhere to go out to eat in Fort Yukon, and only one small village store. A few times she added an airport delivery from Pizza Hut (whose food kept best on the plane trip) to her monthly order of groceries.

At the time, she said the only delivery options to the airport were pizza and Chinese food. “I craved other stuff, but they didn’t have DoorDash back then,” said Ms. Ordonez, 35.

Today, with the ubiquity of food-delivery services, people living in places with no restaurants or grocery stores have access to all the cuisines the nearest city has to offer.

When Mr. Golike, 38, travels to locations in Prince William Sound, delivery-food orders are on nearly every flight. “KFC is the biggest one I see,” he said.

Midnight Air, an Anchorage air-taxi service, carries DoorDash and Uber Eats orders on its flights about three times a week, said its owner, Robert May. Lake & Peninsula Airlines, a regional carrier serving the Lake Clark and Kuskokwim regions of southwest Alaska, delivers Instacart orders every day, and DoorDash orders “probably every other day,” said Katie Burrows, 29, an office assistant for the airline.

As an owner of Alaska Air Transit, Josie Owen has seen how delivery apps have made city food more available to those with no access to the state’s main road system. To deal with the influx of orders coming to its office, the company set up a large tent in the parking lot where drivers can label the order with the person’s name and village before leaving it with the staff.

Ms. Owen said that although people in rural Alaska sometimes order groceries from the nearest city, many practice a subsistence lifestyle and harvest their own food from the land. “A lot of the food deliveries here are just treats,” she said.

Most of the airlines will stop in a remote community only if a passenger is coming or going. When that happens, people in the village know they should ready orders with DoorDash, Grub Hub, Uber Eats or a local expediter — someone who runs odd jobs for people. From there, the food-delivery driver will pick up the order and bring it directly to the airline. Depending on the destination, the weight of the food and the space available on the flight, rural Alaskans can expect to pay anywhere from $10 to $30 just to get their food to the plane.

Still, as Ms. Burrows pointed out, many people find the expense worthwhile. “There’s literally no roads to connect these people to McDonald’s or to KFC or whatever. Paying an expediter or DoorDashing something to our office and paying $20 is really not that expensive compared to going into town.”

The number of food deliveries can depend on the weather, since an unexpected storm can cancel flights, leaving planes parked on the tarmac. When that happens, food orders have to go in cold storage or be eaten.

“You have all this DoorDash sitting there, and so oftentimes to help compensate, our Anchorage staff will actually just eat the DoorDash and then reorder it and pay for it, and try to ship it out the next day,” Ms. Burrows said.

Expediters play a key role for many rural residents. Caiti O’Connor, 22, and her twin sister, Shari, who are from Dillingham but live in Anchorage during the school year, started an expediting business in the fall of 2020.

The sisters help rural Alaskans with various chores, like picking up pets at the airport for veterinarian appointments in town, storing vehicles or dropping off $300 worth of Panda Express food at the airport for an employee appreciation party on St. Paul Island.

“We like to think of ourselves as the cousins in Anchorage,” Ms. O’Connor said.

The takeout-by-plane business is so brisk that in June 2020, Kristen Taylor, 40, bought an Anchorage franchise of the chain restaurant Papa Murphy’s and quickly set up a second business, Alaska Sky Pie, which arranges the shipping of frozen pizzas, cakes and party decorations all over Alaska.

Through contracts with several airlines in Anchorage, she said she can ship pizzas to “pretty much any village” for less than $5 a 16-inch pie. With 10 pizzas, shipping is free.

In the summer, when many Alaskans are busy fishing, hunting and foraging food for winter, she sends out 25 to 50 pizzas a week. Business picks up in fall and winter, to several hundred pizzas a day. Ms. Taylor estimates that she sends 7,500 pizzas a year to remote parts of Alaska, for occasions such birthdays, graduations, funerals, weddings and proms.

“I have a strong respect for the struggles that the bush has,” she said.

She has been especially touched by the notes she gets from families who order her pizzas, including one she said she received from a girl in Arctic Village:

“I’ve seen a pizza on TV, but I’ve never had one before.”