BBC Weather: Kirkwood warns of potential disruption due to snow

Britain has been battered by extreme weather conditions in recent weeks – from severe flooding at the hands of Storm Christoph to several inches of snow, which caused disruption across the nation. Now even more weather warnings have been issued by the Met Office, with a band of heavy rain and even more snow expected in some parts.

Issuing a yellow weather warning for rain in Northern Ireland on Wednesday, the Met Office said there could be some flooding and transport disruption in the affected areas.

The warning, which is in place from 6pm tonight to 9am on Thursday, reads: “Heavy rain will spread across Northern Ireland this evening, lasting through the night before turning lighter on Thursday morning.

“Rainfall accumulations of 20 to 30mm are expected quite widely, with around 40mm likely over hilly regions.

“With saturated ground, this will be enough to bring some flooding issues.” 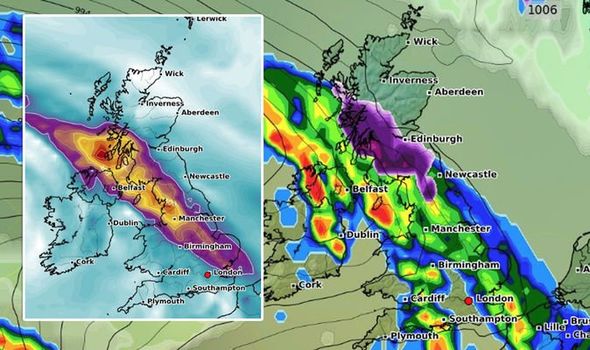 Also on Thursday, another yellow alert has been issued in parts of northern England for heavy rainfall.

The Met Office warns the flooding of homes and business in the affected area – which includes much of the north west of England, plus Staffordshire, Stoke on Trent and Derbyshire – is likely.

The alert said: “Rain will arrive across northwest England on Wednesday evening and turn heavy overnight into Thursday.

“During this time 20 to 30mm is likely to fall quite widely across the area, with as much as 50 to 60mm possible over the hills.

“Some of this may fall as snow over the higher parts of the Pennines. Overnight into Friday, the rainfall will become much lighter and more patchy in nature as the rain band pushes southeast.” 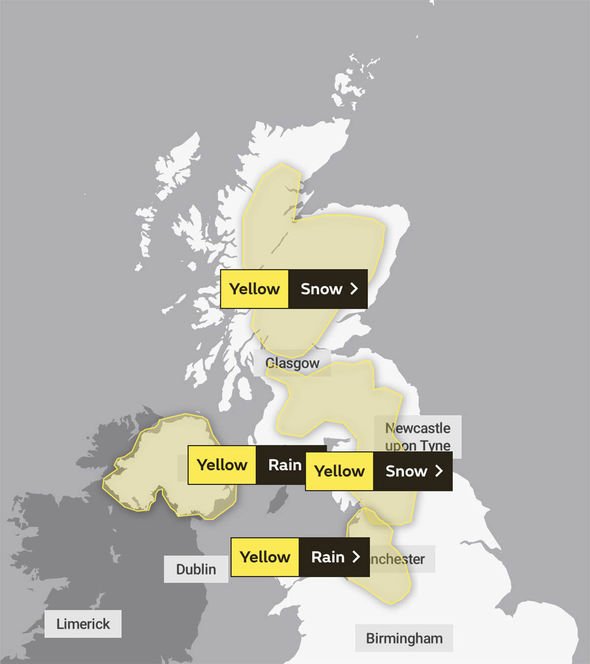 Thursday will also bring snow to some parts of the UK, with a yellow alert in place for a swathe of Scotland and northern England.

From 4am to 3pm on Thursday, an alert is in place for parts of the north east and north west of England, where up to six inches (15cm) of snow could fall int he highest areas.

Parts of North Yorksjire and West Yorkshire will also see snow during this time, according to the MEt Office.

The alert reads: “A band of rain will move north on Thursday and turn to snow over high ground. Snow is likely to low levels at times, but will mostly settle over higher ground above 200 m with 2cm to 5cm likely quite widely, while some places above 300 m may see 10 to 15cm.

“Less cold air following the snow could lead to some thawing and localised surface water flooding on a few roads.”