Mark Peel, one of a handful of young, educated California cooks enamored with local ingredients who emerged in the 1970s and 1980s and created a looser, farm-focused style of cuisine that would change the trajectory of American food culture, died on Sunday in Los Angeles. He was 66.

Mr. Peel was admitted to a hospital with unusual pain nine days earlier and was diagnosed with an aggressive form of germ cell cancer, his daughter Vanessa Silverton-Peel said.

Mr. Peel helped write the rules for a new culinary canon based on the highest quality and freshest regional ingredients but also on a casually beautiful presentation that he likened to “an unmade bed with fine linen.”

“It should look disheveled,” he said. “A little messy. As if it fell from heaven.”

Mr. Peel worked at restaurants that would come to define California cuisine before anyone called it that, among them Spago, the star-studded West Hollywood restaurant that Wolfgang Puck opened in 1982. But his biggest platform was the restaurant Campanile as well as the adjacent La Brea Bakery in Los Angeles, both of which he opened in 1989 with his wife at the time, the chef Nancy Silverton, and Manfred Krankl.

When Campanile closed 23 years later, the Los Angeles Times food critic Jonathan Gold, who died in 2018, wrote a love letter to the place, which meant so much to him that he had gotten married there.

“It is hard to overstate Campanile’s contributions to American cooking,” he wrote. “It wasn’t the first fine restaurant in the country to operate with a grill at its heart, but it codified the style, as well as the practice of reinterpreting simple dishes — steak and beans, Greek salad, fish soup — with first-rate ingredients and chefly virtuosity.”

He called Mr. Peel the most exacting grill chef in the country, “a master who plays his smoldering logs the way that Pinchas Zukerman does a Stradivarius.”

Mr. Peel, a fifth generation Angelino, was born in Los Angeles on Nov. 19, 1954, to Fred and Cheryl (Stockwell) Peel, schoolteachers who met when they were attending the University of California at Los Angeles. They divorced when Mr. Peel was in the fifth grade. 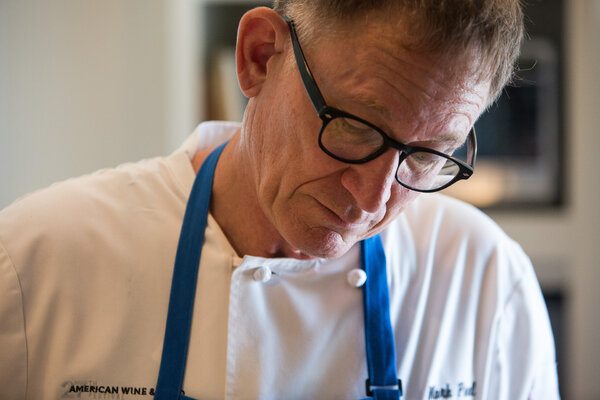 Mr. Peel and his siblings lived with their mother, who was a terrible cook. Mr. Peel took up the task.

“You were 9 years old when you wanted to cook the Thanksgiving turkey,” his mother told him in “Making a Mark,” a 2015 Dutch documentary about Mr. Peel.

He started working in restaurants to support himself while in school, as a dishwasher and fry cook. He attended a handful of universities studying subjects as varied as medicine, American history and agricultural economics. He transferred to Cal Poly Pomona to study hotel and restaurant management but dropped out just shy of graduating to work in restaurants full time. (The university granted him a degree in 2010.)

In 1975, a Los Angeles Times food writer told him to call Patrick Terrail, the owner of Ma Maison, one of the top restaurants in the city, where a young chef named Wolfgang Puck ran the kitchen. He was hired over the phone.

Mr. Puck sent Mr. Peel to France to study for six months. In 1979, along with the chefs Jonathan Waxman and Ken Frank, he opened Michael’s in Santa Monica. Owned by Michael McCarty, it was foundational in codifying California cuisine.

“It was a moment in California and in L.A. specifically when people were thinking about American ingredients and redefining what an American restaurant could be,” said Ruth Reichl, the food writer and editor, who remained close with Ms. Silverton.

Mr. Peel went to work at Chez Panisse in Berkeley to learn how that restaurant made its beloved pizzas. Before he headed back to Los Angeles to eventually join Spago, he went through the Chez Panisse files and found the telephone number for the mason who had built the pizza ovens and arranged for him to make similar ovens for Spago, where Mr. Puck planned to make pizzas with fanciful toppings like smoked salmon and duck sausage.

“He is one of these humans who connected the dots and whatever it was, he could get it for you,” said Andrew Friedman, who featured Mr. Peel in his 2018 book “Chefs, Drugs & Rock & Roll,” which chronicled the roots of the American culinary movement that started in the late 1970s.

When Mr. Puck and his wife, the designer Barbara Lazaroff, opened Spago, the restaurant was packed the first night. The open kitchen, designed to make it seem like theater, was separated from diners only by a long, narrow counter. Celebrities and other members of the Hollywood elite were constantly leaning over it to speak to Mr. Puck.

With Mr. Peel handling the kitchen, Mr. Puck could venture into the dining room to mingle with guests and capitalize on his growing fame, a move that would mark the beginning of the celebrity chef era.

Fame didn’t impress Mr. Peel. He even played down his own talents, always calling himself a cook and not a chef.

“He was not like, ‘Oh, my God, here comes Henry Winkler or Stallone or Kirk Douglas,’” Mr. Puck said. “He was a very kind human being and was very well-balanced in his life. He was never one of these crazy guys who threw pans.”

In the documentary, Mr. Peel explained that his philosophy of cooking came down to respect, both for food and for people.

“People might say love is the most important thing, but what’s love?” he said. “I don’t know. But respect is easy to define.”

Mr. Peel and Ms. Silverton struck up a relationship when they worked at Michael’s. When he went to Spago, he insisted that she be hired as the pastry chef. They married in 1985. Theirs would become one of America’s great culinary partnerships.

After a short stint in New York at Maxwell’s Plum, the couple returned to Los Angeles and in 1989 opened La Brea Bakery and Campanile in a crumbling faux-Andalusian building originally built by Charlie Chaplin. Together the two businesses changed the dining landscape in Los Angeles.

Mr. Peel and Ms. Silverton lived above the restaurant so that they could juggle the needs of their two young children and the demands of an establishment that was closed only on Sunday. By the time their third child came along in 1993, they had moved to a house in upscale Hancock Park.

Their bakery exploded into a multimillion-dollar business that was distributing bread in nearly 40 states. In 2003, the Irish food giant IAWS Group agreed to buy an 80 percent stake in the business for $68.5 million.

Mr. Peel and Ms. Silverton personally made several million dollars from the deal and invested it with a Beverly Hills financial adviser, who, it turned out, was sending it all to Bernard Madoff. They both lost most of the money they had made on the sale, victims of Mr. Madoff’s $50 billion pyramid scheme.

The couple separated in 2003 and eventually divorced. Mr. Peel married the comedian and food personality Daphne Brogdon in 2005. They separated in 2017 and, at Mr. Peel’s death, were divorcing, Ms. Silverton-Peel said. A first marriage, in 1979, to Reine Guttman (now Reine River) lasted about a year.

Mr. Peel co-wrote three books and appeared on several food television competition shows, as both a contestant and a judge. His seafood stall, Prawn, in the Grand Central Market in downtown Los Angeles had been shut down because of the pandemic.

He was a chronic procrastinator who was always running late for professional and family events, Ms. Silverton-Peel said, and could get distracted reading a newspaper or a book on the way out the door.

But not at work.

“Working on the line,” she said, “was the one thing that could get him to do something on time.”