The US President sent a clear warning against Iran as tensions in the Middle East flared up. He made the remarks during a meeting with Israeli President Reuven Rivlin in the White House.

The 46th President said: “What I can say to you Iran will never get a nuclear weapon on my watch as they say.”

He also told the Israeli president the US had an “ironclad” responsibility toward Israel’s defence.

Mr Biden added: “We’re committed to – unwavering commitment to your self defence.

“It’s real. It’s something that I often say: If there weren’t an Israel we’d have to invent one.” 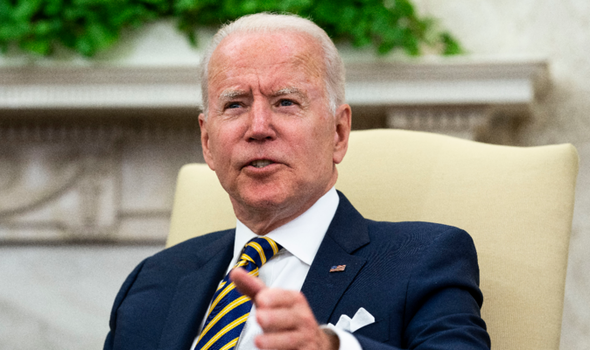 On Sunday, Mr Biden ordered a round of airstrikes against Iran-backed militia in response to strikes by the militia on US facilities in Iraq.

The US military addressed the airstrikes in a statement.

It confirmed that “operational and weapons storage facilities” at two locations in Syria and one location in Iraq were targeted.”

It is the second time Mr Biden has responded to Iran-backed militia since taking office at the beginning of the year.

In February, strikes were ordered on a location in Syria in retaliation to rocket attacks from Iraq.

A statement from The Pentagon pointed out that the response showed “President Biden has been clear that he will act to protect US personnel”, and that taking “necessary, appropriate, and deliberate action” is “designed to limit the risk of escalation”.

It is not known whether there were fatalities or if anyone had been injured.

“The targets were selected because these facilities are utilized by Iran-backed militias that are engaged in unmanned aerial vehicle (UAV) attacks against US personnel and facilities in Iraq.”