The events in the region in recent days have been some of the worst hostilities seen in years. Health officials in Gaza say 232 Palestinians, including 65 children, have been killed since the fighting broke out on May 10, with more than 1,900 people wounded during the aerial attacks. Authorities put the death toll in Israel at 12 with hundreds of people also injured.

Has a ceasefire been agreed?

According to reports, Israel and Hamas will cease fire across the Gaza Strip border as of 2am on Friday (11pm GMT), according to a Hamas official.

A Hamas official told Reuters the ceasefire would be “mutual and simultaneous”.

A statement from the Israeli security cabinet confirmed the ceasefire decision. 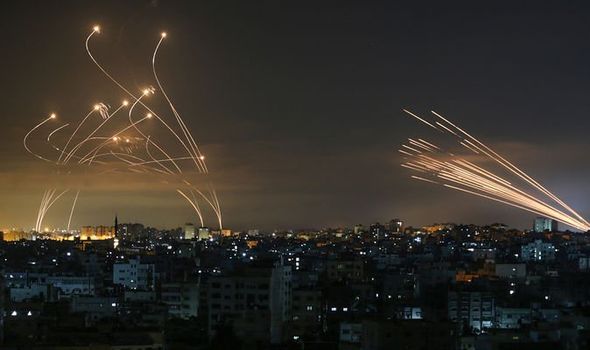 “The chief of staff, the military echelon and the head of the GSS reviewed before the ministers Israel’s great achievements in the campaign, some of which were unprecedented.

“The political echelon emphasizes that the reality on the ground will determine the continuation of the campaign.”

Both sides have faced international pressure in recent days to bring the fighting to an end.

Egyptian state TV reported on Thursday that Egyptian efforts to get a ceasefire approved have been successful.

The decision to end the conflict on Thursday comes after US President Joe Biden urged Israel’s Prime Minister Benjamin Netanyahu to de-escalate the conflict.

The UK Government pledged £3.2 million in aid for civilians under attack in Gaza, while also urging a ceasefire to be agreed.

Minister for the Middle East James Cleverly said earlier on Thursday: “Today’s UK support will help UNRWA deliver life-saving humanitarian aid to those that need it most.

“The escalation of violence and loss of life in Israel and the Occupied Palestinian Territories has shocked all of us.

“Both sides must work towards an immediate ceasefire, to prevent the further loss of life and a worsening humanitarian situation.”