The capital is likely to see snow this weekend as much of the UK braces for yet another cold snap in the coming days, with the Met Office issuing warnings for the capital. Temperatures are set to plunge across the UK, reaching minus figures in London during the nights. Settled snow was seen at the end of January in London, usually a rare sight.

Is it going to snow in London this weekend?

This weekend could spell the second flurry of snow in 2021, with the majority expected on Saturday evening.

Temperatures during the day are due to be mild, with 10C forecast to be the average across the city.

Rain is expected to turn to snow during the latter end of Saturday, and the likelihood increasing on Sunday thanks to strong northeasterly winds bringing a chill over the southeast. 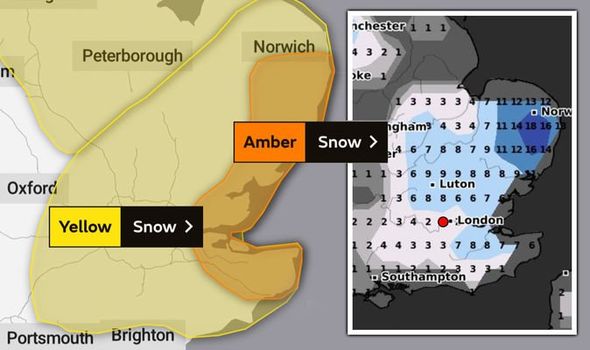 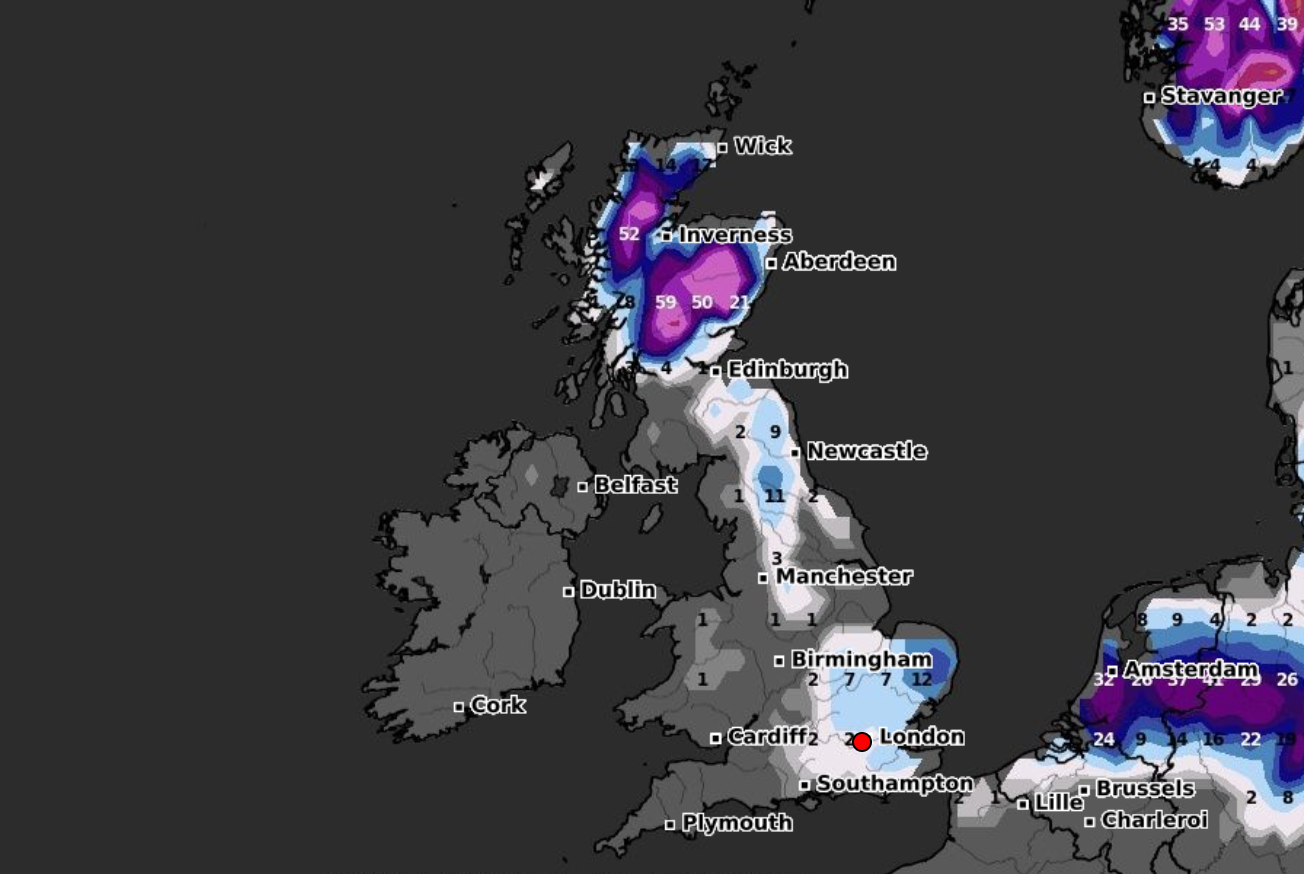 From tomorrow London will be under a yellow weather warning for snow, which reads: “Rain will turn increasingly to snow during Saturday evening, with snow likely to become widespread, occasionally heavy and persistent by Sunday morning.

“There remains some uncertainty with the location of the heaviest snowfall and therefore the greatest disruption, most likely towards the east coast.

“Widespread accumulations of 1 to 3cm are likely, with 5 to 10cm possible in places.

“Over higher ground and across eastern areas, e.g. The Kent Downs, 15 to 20cm is plausible. 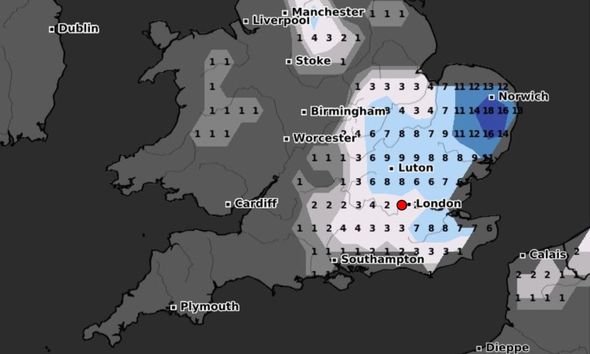 “A brisk easterly wind, strong along eastern coasts, may add to travel disruption.”

Maps show snowy conditions moving downward from Scandinavia, through Scotland, down the east coast toward London over the weekend.

The weather front from the east is set to cause pretty chilly temperatures, going as far as -2C in London.

The risk of snow is likely to remain into next week for the capital, with other parts of the country, including Scotland and the entire east coast of England also expecting snow at various points.

The BBC weather report for London reads: “Today, cloud and any mist will gradually thin, leaving some bright or sunny intervals.

“However, there will be an increasing chance of showers later this afternoon. Gentle winds.

“This evening and tonight will be quite chilly with a mixture of clear intervals and showers.

“A few of the showers could be quite heavy. Local mist and fog forming too. Gentle winds.” 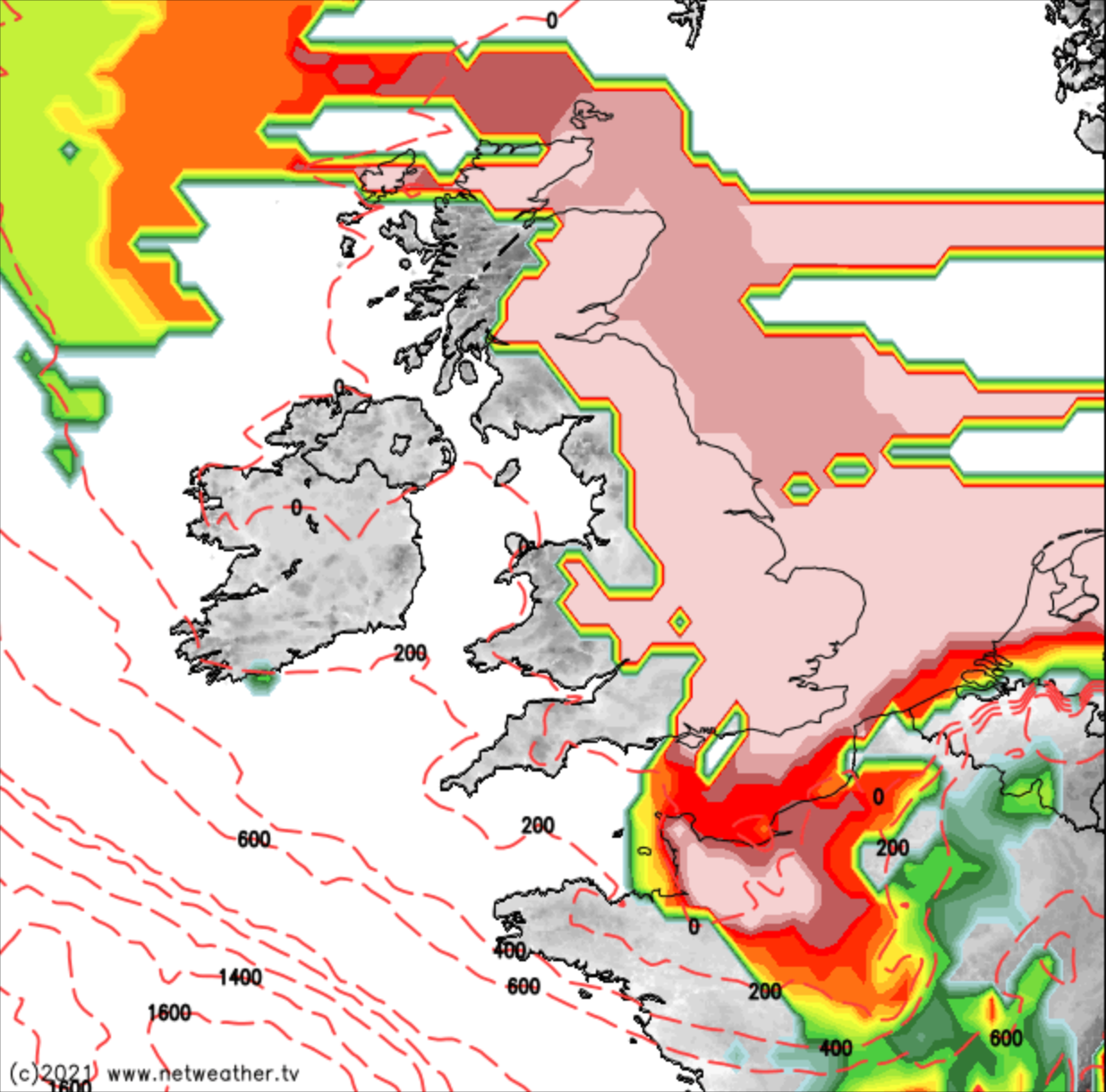 “Sunday will be cloudy and cold with an increasing risk of snow, perhaps with some accumulations, particularly later on.

“A strong north-easterly wind will add to the chill.

The capital has narrowly missed out on amber weather warnings to come this weekend, with one on Sunday just skirting past the eastern edge of the M25.