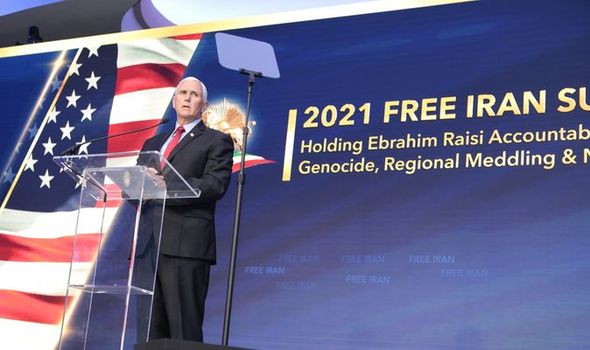 In his first remarks on Iran since the Trump administration lost power last year, he cautioned President Joe Biden, the UK, France and Germany that now was not the time to cave in to Tehran’s demands and abandon the maximum pressure campaign started by the Trump administration because “weakness arouses evil ”. It comes as a new report by the IISS think tank warns of conflict in the Middle East as Iran inches closer to possessing a nuclear bomb.

On Saturday the US President, Britain, Germany and France told Iran it was not too late to resume talks over its nuclear programme and reverse course over “provocative steps” such as the production of highly enriched uranium and enriched uranium metal which are “important to nuclear weapons programs. “

Addressing a separate conference held by the by the National Council of Resistance of Iran (NCRI) in Washington DC, Pence said: “When we came in, Iran had benefited by the Obama-Biden administration’s approach, the JCPOA (The Joint Comprehensive Plan of Action on Iran’s nuclear ambitions) delivering pallets of cash for the Mullahs in Iran, sanctions relief. And yet the day we were inaugurated in 2017, Iran was sowing violence all across the region, it was almost difficult to count every country where Iran was supporting terrorist activity.”

Citing the cancelling of Iran’s nuclear deal, which which had “flooded the regime’s coffers with tens of billions of dollars used to repress its own people and support deadly terrorist attacks across the region”, crippling sanctions and the assassination of General Qassem Soleimani, head of the Quds Force, he added: “We stood against their tyrannical regime, as perhaps no administration had done in the modern era. On the day we left office, the Iranian regime was more isolated than ever before. “

He revealed the international reaction when President Trump announced he would pull out of the nuclear deal in 2018.

“To say that every leader in the world opposed us, withdrawing from the Iran nuclear deal would be an understatement. “The truth is, I was there for many of those phone calls in the Oval Office and one leader after another came attempting to persuade the President to change course to change path.

“If you’ll remember, in the early months of our administration, we created room to see if there would be any change in direction, if there would be a willingness to renegotiate the deal and when there wasn’t by October, we were out.

He added: “I think that it is a real testament to President Trump’s determination to follow a posture of strength, to confront the malign activity of Iran in the region, to abandon the politics of appeasement toward the Ayatollahs and also ultimately to keep a promise that we made to the American people and to the world.”

The placing into power of Ebrahim Raisi, he said, was a sign of the regime’s “growing desperation and vulnerability” in the face of mounting protests across the country.

Referring to the massacre of tens of thousands of mostly political dissidents in 1988 – most of which supported the non-fundamentalist People’s Mujahedin Organization of Iran (MEK) – he said: “Thirty years ago, Raisi was in charge of the Ayatollah’s death squad, and he’s now the President of that country, a brutal mass murderer responsible in 1988 for the massacre of 30,000 political prisoners.

“The Iranian regime has never been weaker than it is today. Its economy is in shambles. The inflation rate has skyrocketed. Iranian currency has lost 90% of its value. Four out of five Iranians now live below the poverty line. Corruption is at an all-time high,“ he said.

“By all indications, the Iranian people are ready for change.

“And there’s every indication that the tyrannical regime in Iran knows their days are numbered.

“(Raisi’s) selection as President is clearly intended to quash internal dissent and intimidate the people of Iran into remaining silent. “

The conference, attended by tens of thousands of Free Iran supporters and a raft of cross-party US dignitaries including

A joint statement by President Biden, Boris Johnson, Chancellor Merkel and President Macron at the G20 summit said:noted the “ alarming” development of Iran’s refusal to cooperate with nuclear inspectors.

However, it added: “We are convinced that it is possible to quickly reach and implement an understanding on return to full compliance and to ensure for the long term that Iran’s nuclear program is exclusively for peaceful purposes”, said the statement, noting that this would provide vital sanctions relief, but added this would only be possible” if Iran changes course.”

But Pence warned that the Biden administration’s stance threatened to embolden the regime to test the US’ resolve.

“With the current administration’s embrace of the JCPOA, their hesitation to condemn rockets being fired at our cherished ally Israel, the heartbreaking and disastrous withdrawal from Afghanistan, our adversaries may be sensing weakness.They may be emboldened to test our resolve,“ he said.

“And in fact, they’ve already begun to do so with reports of an Iranian drone attack on a US base in Syria.

In its newly-published Strategic Survey 2021, an annual assessment of strategic geopolitics, the IISS think tank report warned: “The manipulated election to office of President Ebrahim Raisi will strengthen the role of the Islamic Revolutionary Guard Corps (IRGC) at the centre of Iran’s governing apparatus.”

The report went on: “This will in turn ensure that the IRGC is in complete charge of regional relationships, raising the prospect of intensified efforts to weigh the regional balances of power towards Iran’s interests. As the IRGC values its international influence network and the state’s ballistic-missile programme even more than the nuclear project, the odds of reaching a satisfactory follow-on agreement to the nuclear agreement known as the Joint Comprehensive Plan of Action (JCPOA) are limited.The window to slow Iran’s nuclear programme is closing. Security in the Gulf will be tenuous.”

It adds: “Iran’s new government needs sanctions to be lifted but is unlikely to agree to a reduction of its regional influence operations to achieve it. Tensions with Israel are bound to rise.

“Gulf countries worry equally about an Iran that develops nuclear weapons, and a war to prevent this from happening.”