A toddler who was found abandoned and half-naked on a secluded road in Mexico has been reunited with his mother in Honduras.

Wilder was found crying, alone and surrounded by rubbish near a cargo truck that contained dozens of people trying to make their way to the US border.

The two-year-old and his father were attempting to migrate to the States from their hometown of Cabanas, but became separated during the journey. After spending almost three weeks in the custody of Mexican authorities, Wilder’s arrival home was celebrated with cake and fireworks. He is in a good condition.

Lorena Garcia, the toddler’s mother, said: “Never again will I let my child go. I’m so happy to have him with me. Eating beans and corn, we’ll get by.”

Her husband Noel Ladino – who was hoping to secure work in the US – remains detained in Mexico, and Ms Garcia expressed hope that they too will be reunited soon.

The young family were surviving on a precarious salary of about $4 (£2.90) a day when Mr Ladino could find jobs, but such opportunities in their rural town are few and far between.

Some 94% of the region’s population are poor and hundreds of thousands of Hondurans have set off for the US to escape poverty, violence and corruption, but many are turned back. 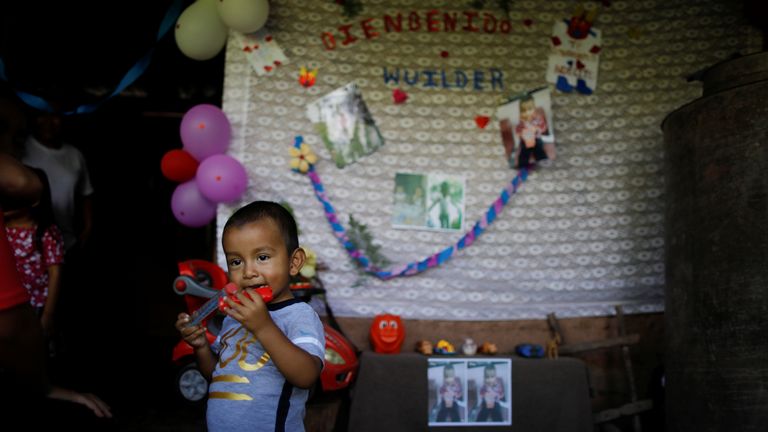 Over the past few months, there has been an increase in the number of unaccompanied children arriving at the US-Mexico border.

When asked whether they would attempt to migrate to the US again, Ms Garcia said: “No, not anymore. To risk the lives of children. It’s been said what we went through. It’s better to be poor and to keep on living.”