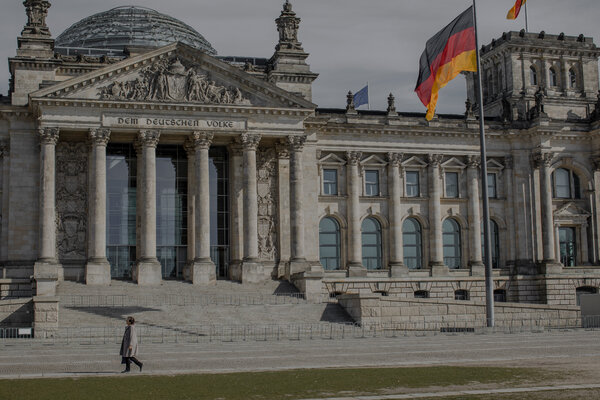 For QAnon it is “The Storm,” when mass violence will topple the elite cabal of pedophiles who they imagine to be running the government. White-power groups in the United States have long promised a catastrophic race war. And in Germany and Austria, neo-Nazis herald an imagined putsch on “Day X” — when the democratic order collapses and they take over.

All are examples of “accelerationist” ideologies, which promise a moment when the institutions of government, society and the economy will be wiped out in a wave of catastrophic violence, clearing the way for a utopia that will supposedly follow.

Accelerationism has long been a feature of white-power groups and other far-right militias. But now, experts say, accelerationist thinking is proliferating in ways that could threaten not just public safety, but the stability of democracy itself.

“In many ways we can see how Jan. 6 was a kind of loosely formed coalition around this idea of accelerationism,” said Cynthia Miller-Idriss, the director of the Polarization and Extremism Research and Innovation Lab at American University, said of the attack on the U.S. Capitol Building last January.

Mainstream leaders, she believes, are failing to heed the risk that coalition could pose. “My fear is that we are, as a country, starting to treat that like a one-time fluke rather than as a potential turning point.”

“I have thought a lot about the parallels with the Weimar Republic,” the fragile period of democracy in Germany whose collapse allowed the Nazis to take power, she said. It was marked by a series of attacks, failed coups and other efforts to undermine democracy. And even though actions like Hitler’s beer-hall putsch failed, German democracy was ultimately not strong enough to withstand the chaos.

“For me, the parallel is that I think a lot of people want to see Jan. 6 as the end of something,” she said. “I think we have to consider the possibility that this was the beginning of something.”

Neo-Nazi groups and other extremists have long spoken of Day X — a moment of crisis, both feared and longed for, when Germany’s social order would collapse, requiring committed far-right extremists, in their telling, to save the nation.

Nordkreuz, a group of far-right extremists that included police officers and former soldiers who were part of a nationwide encrypted Telegram network, began prepping for Day X in ways that sounded frighteningly concrete. Members of the group plotted to round up political enemies and those defending migrants and refugees on Day X, put them on trucks and drive them to a secret location, according to a witness statement in a police interview. Then they would kill them.

On its Day X order list, the group had jotted down body bags and quicklime. The leader of the group, a former police sniper, has been convicted on weapons charges, and two other members are under investigation on suspicion of plotting terrorism.

The line between preparing for Day X and precipitating it is becoming increasingly blurred. The danger of accelerationism is that it sanctifies violence, said Matthias Quent, an expert on far-right extremism and director of an institute that studies democracy and civil society in the state of Thuringia in eastern Germany. Mythical days of reckoning serve as a call to action, a pretext for terrorism.

“When Day X doesn’t come and people get frustrated, they might start plotting terrorist attacks, something to trigger Day X or just to act,” he said.

Anetta Kahane, a prominent Jewish activist in Germany, is intimately familiar with the risks that brings. She runs the Amadeu Antonio Foundation, which works to oppose racism and far-right ideology in Germany, and has been a target of far-right hatred for decades.

Last month, a military officer who was a member of the same nationwide Telegram network as the Nordkreuz group went on trial on accusations of plotting one or several assassinations of prominent politicians and public figures in the hope of triggering Day X. First Lt. Franco A. (as his name is rendered in court documents in keeping with German privacy law), had disguised himself as a Syrian refugee, apparently as part of a plan to provoke racial hatred. One of the possible targets, prosecutors say, was Ms. Kahane.

Franco A. denies that he was planning to kill Ms. Kahane. He denies all terrorism charges against him, saying that he had pretended to be a refugee in order to blow the whistle on Chancellor Angela Merkel’s refugee policy. But in his papers, investigators discovered the names of several prominent politicians and public figures, including Ms. Kahane, as well as a hand-drawn map of the location of her office. They also found several photos taken inside her office building’s parking garage on his phone.

Accelerationists, Ms. Kahane believes, want to trigger Day X, not merely wait for it to occur. “The Nazis are not patient — they don’t want to wait. If the revolution doesn’t start by itself, you have to help it along,” she said. “It’s an active strategy, not a passive one.”

The crucial thing to understand about this kind of apocalyptic fantasy is that to people who have adopted militant far-right racial ideologies, a violent overthrow like Day X is not the thing that begins the apocalypse, but the thing that ends it, said Kathleen Belew, a University of Chicago historian who is one of the foremost experts on the white-power movement in the United States.

“All of this activism is already in a state of encounter with the end of the world,” she said in an interview. Immigration, intermarriage and falling birthrates are all leading toward a time when countries like the United States will no longer be majority white. “For people in this ideology, that’s already the end of the world.”

“That sense of emergency is really important to understand, because I think without that, the degree of — both the degree of fear and the degree of violence don’t make a lot of sense,” she said.

In fact, accelerationist narratives are a strange dual fantasy of both weakness and strength. They implicitly accept that the far right is too weak to turn the tide of demographic and political change through ordinary political means, and that its only chance would be if complete societal collapse wipes out society as we know it.

But accelerationist mythmaking also offers a fantasy of strength: It promises adherents that they have the power to bring about that collapse and to dominate the new order that will follow it.

The risks of that ideology are far from theoretical.

In Germany, members of the terrorist group Revolution Chemnitz were convicted last year of plotting an attack on Oct. 3, 2018, billed as “a turning point in history” and “historic day” on which the “regime change” would be forced.

The bombing of a federal building in Oklahoma City in 1995, which killed 168 people, including 19 children, was carried out by far-right militants who took inspiration from “The Turner Diaries,” a 1978 novel that depicts a violent revolution in the United States, followed by a mass genocide of nonwhite people. And in 2015, a white supremacist gunman cited the desire to start a “race war” as his reason for killing nine Black people in the Emanuel African Methodist Episcopal Church in Charleston, S.C.

And many participants in the Jan. 6 attack on the United States Capitol building saw that as a first step in overthrowing the government that they saw as corrupt, or the social order of the United States more broadly, Dr. Miller-Idriss said.

But there are other dangers, less direct but perhaps ultimately more serious, experts say.

It is likely that only a small fringe within the Jan. 6 rioters adhere to the accelerationist ideas of QAnon or armed militias, Dr. Miller-Idriss said. QAnon has become an umbrella for multiple conspiracy theories, and not all of its supporters are waiting for “the storm” or trying to bring it about, she said.

But she believes that should be an occasion for more worry, not less, because the events of Jan. 6 show that the extremist fringe can develop a broader coalition than was ever possible in the past.

“It was the first time that we in this country have seen what amounted to a successful coalition, even a spontaneous one, across a variety of kind of groups on the far-right spectrum,” she said. “It was a coalition that emerged semi-spontaneously that showed that despite these differences, these groups can unify around a thematic issue or event.”

And unlike the white-power fringe of the 1980s and 1990s, today’s extremists have ties with mainstream politics. Several Republican legislators took office after cultivating support among QAnon adherents. And in the Senate last week, Republicans blocked the creation of an independent commission to investigate the Jan. 6 attacks.

“The United States is a country that has always liked to think of itself as a beacon of democracy,” Dr. Miller-Idriss said. “And so I think I can make it harder for us to acknowledge and recognize how our democracy can be fragile, just like any other democracy in the world.”