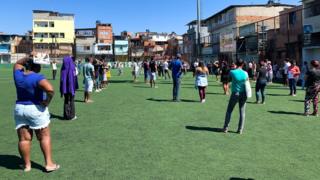 Life may have slowed down in recent weeks, but it certainly hasn’t stopped yet in Paraisópolis, one of Sao Paulo’s biggest favelas.

Residents are still running errands, and motorbikes are still weaving through traffic on the narrow, busy streets. Some shops have closed – but many are very much open, despite a state-wide quarantine. When people here live hand-to-mouth, how do you tell them to shut up shop?

Covid-19 is seen by many in favelas as a rich person’s disease brought in from abroad, but as the virus spreads, they worry that the poor will suffer the most.

Gilson Rodrigues is standing on a football pitch in the middle of the favela, loudspeaker in hand. The president of Paraisópolis residents’ association, he’s training people to become so-called “street presidents” – volunteers who’ll ensure households understand hygiene measures and the need to stay indoors.

While the middle-class are now working from home and worrying about where to source alcohol gel, residents in Paraisópolis can’t afford such luxuries at all. One woman told me it cost 30 reais (£4.60; $5.70) for a small 50ml bottle. Impossible when you’re out of a job.

“The information that’s being disseminated about the virus doesn’t work for the people on the periphery,” says Gilson. “Terms that are being used make no sense to the community here.”

There are a few hundred people being trained up, all standing a couple of metres apart. They’re practising social distancing as much as they can in this densely populated part of town.

Flavia da Silva is one of the volunteers.

“We’ve got to learn how to prevent the worst from happening, so that when it eventually hits us, we are already half-way there,” she says. She worries though that people aren’t taking it seriously enough.

‘When the president says something stupid…’

Somebody from the residents’ association comes by and tells a group of older ladies who are sitting on a wall they should go home. One lady scoffs at the idea.

Gilson tells me that one of his toughest tasks is debunking misinformation coming from Jair Bolsonaro. The president has been railing against drastic state-led measures to shut down the economy in an effort to curb the virus.

“When the president says something stupid, that coronavirus is just the sniffles or that people can get back to work, well the next day, people are out on the streets,” he says. 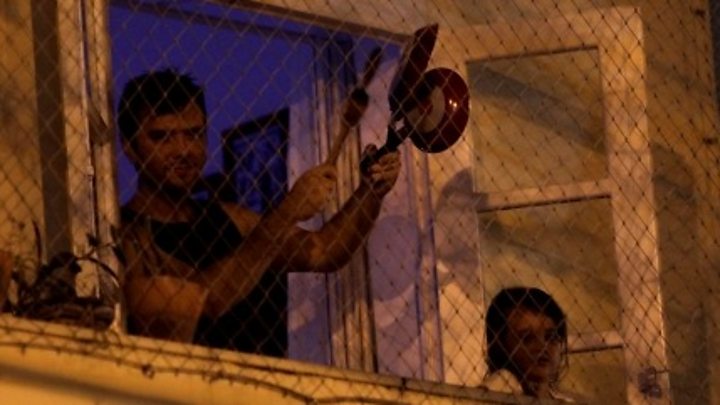 “Jair Bolsonaro will be partly responsible for any deaths here because he’s creating this situation. It’s as if the 13 million people who live in slums in Brazil don’t exist. There’s been no policy to look after the country’s favelas, we’re being left to fend for ourselves.”

The residents are planning ahead in other ways too. A shopkeeper opposite the football ground takes me to a courtyard behind the road. Under a canopy are two ambulances – he tells me residents have hired them, on standby for a surge in coronavirus cases.

Gilvania Reis Gonçalves – known to her friends as Gil – used to sell tapioca outside a metro station in the west of Sao Paulo. But when businesses were told to close last month, she was forced to stop work.

A couple of weeks ago, she took to Twitter to highlight the problems facing informal workers – and her message had a big impact. Millions of people will struggle to keep going as the pandemic continues to spread and Gil knows that. She’s not arguing against health ministry advice to stay indoors but she thinks the government needs to step in and help more.

Already, it’s promised informal workers 600 Brazilian reais ($114; £92) a month, but Gil says it’s not enough and so far, it’s not forthcoming either.

“I’m not sleeping,” she says. “I won’t be able to afford my rent next month, I don’t know how I am going to do it. I want [Bolsonaro] to think about these things.”

Gil’s friend Maria “Izaury” dos Santos is grateful she’s still working, even if it is just two days a week as a cleaner. Izaury used to have another cleaning job and sold coffee and açaí on the street – but she was let go from the cleaning job when the virus hit and she can no longer sell food now either. Her monthly income for cleaning an apartment is now 700 reais (£107; $132).

Izaury has high blood pressure and pre-diabetes, both issues that make her more vulnerable to coronavirus.

And despite recommendations that non-essential workers stay home, her employer – a doctor – hasn’t advised her to stop coming, so she feels she has little choice. Izaury says she won’t get paid if she stays at home – and it’s a situation repeated across the country.

“I’m a bit scared,” she says. “On the buses, people cough, they don’t take care covering their mouths. But I need to put food on the table. When I was a single mother, I had to take food from rubbish bins – I never want my kids to go through that again.”

In Jair Bolsonaro’s last television address he said that the country had “to save lives without destroying jobs”. He insists that shutting down the country would be a disaster.

But the pandemic has already hit and it’s only getting worse. Without more concrete help for Brazil’s informal workers, these poor neighbourhoods are set to be the battleground in the fight against the coronavirus.