Deputy Economy Minister Antonio Misiani said the eurozone’s bailout fund – the European Stability Mechanism (ESM) – should be deployed without restrictions within the bloc to manage economic fallout from the coronavirus epidemic. But the move could put Rome at loggerheads with richer northern euro zone nations like Germany and the Netherlands, who are against handing out funds from the ESM funds without conditions.

Italy has borne the brunt of the outbreak in Europe, with 6,077 reported deaths so far.

Mr Misiani said: “The only acceptable conditionality is that of using the ESM resources to manage the health and economic emergency.”

Eurozone finance ministers will today discuss proposals by the European Commission to deploy the fund, which has €410 billion of unused lending power as a coronavirus cushion. 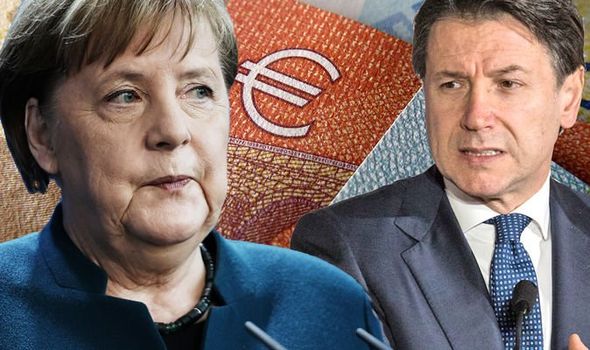 Officials are said to be worried that as the pandemic spreads and the eurozone sinks into a deep recession, financial markets could start demanding a high price for lending to governments, putting some of the most highly indebted countries like Italy under a lot of strain.

The idea under consideration is therefore that either all, or most, eurozone countries would apply for a precautionary stand-by credit called the Enhanced Conditions Credit Line (ECCL) from the ESM bailout fund, which has an unused lending capacity of €410 billion.

In a bid to stop a pandemic-induced financial rout from shredding the eurozone’s economy, the European Central Bank last week launched a €750 billion emergency bond purchase programme and said it was ready to do more if necessary.

To provide the credit, the ESM would have to borrow on the market via what officials say would be called “coronabonds”, to make clear money from the operation would go only towards fighting the effects of the epidemic.

Currently, the ESM helps eurozone countries only on condition they adjust their economic policies to overcome the problems that lead them to seek financial assistance.

But Both Germany and the Netherlands have said they do not favour ESM loans without such conditions.

Several Italian MPs from the co-ruling 5-Star Movement and right-wing opposition parties have also hit out at using ESM funds, raising concerns that any kind of support would place tougher fiscal obligations on Rome and impinge on national sovereignty.

Raphael Raduzzi, a 5-Star member of the parliamentary finance committee, said: “ESM doesn’t work. Using this instrument to take on a debt for decades is absolutely not in our interests.”

Italy’s Treasury has estimated its economy will contract at least 3 percent this year due to the lockdown imposed to fight the outbreak.