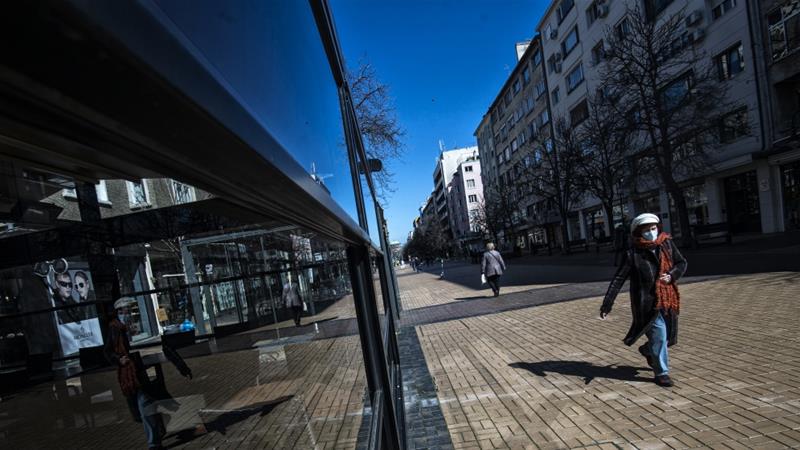 Dozens of doctors and nurses have handed in their resignations at two hospitals in Bulgaria’s capital Sofia after they were told they would have to treat COVID-19 patients.

The medical workers said they had not been supplied with protective gear and equipment to provide proper care, just days after the Bulgarian parliament imposed a state of emergency in the country.

Dr Kameliya Bachovska from the Second City Hospital in Sofia told Al Jazeera she along with 84 other colleagues handed in resignations after they were informed their hospital would be converted to take in COVID-19 patients.

“The hospital does not have enough protective gear, and it is not just our hospital that doesn’t. The rest also don’t have. That is, almost every doctor in Bulgaria is at risk of falling sick because of this, especially among us, the older doctors, who fall into the high-risk category,” she said.

Dr Bachovska explained the hospital does not have the necessary sanitation capabilities and equipment to contain an infectious disease. She also said the majority of doctors and nurses at the health facility are close to retirement age or already working while retired, and fear treating patients without being properly protected.

Last week, at least six members of the medical staff at St Sophia Hospital in the capital also handed in their resignations, expressing similar concerns.

According to Dr Andrei Kotsev, a member of the independent syndicate Zashtita, who was in contact with the staff, apart from no protective gear they were also not given proper instruction on procedures to ensure isolation and the safety of other patients.

“They only received a box of protective gowns after we brought the media to the hospital,” he told Al Jazeera.

Dr Angel Kunchev, the head inspector at the Ministry of Health, said all hospitals instructed to treat COVID19 patients have been provided with the required supplies. In a phone interview, he rejected criticism that the authorities have taken measures against the spread of the virus too late, and said he does not know of other hospitals where staff is resigning.

“I understand that the colleagues from the Second City Hospital fear the unknown, but I don’t accept it because we are talking about virus pneumonia which they encounter every flu season,” he said.

At a news conference on Wednesday, General Ventsislav Mutafchiyski, head of the emergency taskforce coordinating the COVID-19, announced the number of confirmed cases in the country is 92. So far, two people have died – a 66-year-old woman and her 74-year-old husband.

Earlier on Wednesday, Mutafchiyski displayed protective gear – which Bulgarian factories started producing in response to the pandemic – and characterised the measures taken in Bulgaria as “adequate” and “timely”.

On Monday, local media reported Bulgaria would not participate in a EU-wide order for medical supplies despite experiencing shortages. Prime Minister Boyko Borisov announced the reason was a technical problem and the country will be able to join the tender later.

Kotsev said he is constantly receiving messages from doctors at various hospitals saying there are not enough supplies of masks and protective gear for medical staff. He also said it is not fair to criticise physicians who demand proper protection before they provide treatment for patients.

“If doctors die because they weren’t protected, who will treat the patients, then? [The authorities] haven’t provided protective supplies for the doctors, but at the same time they accuse them of deserting,” he said.

Older staff are particularly worried because older people with COVID-19 have been found to have a higher risk of complications and death.

Bulgaria, like other countries in Eastern Europe, has been suffering from a brain drain of doctors, which has reduced the number of medical personnel in the country and forced hospitals to employ retired medical workers. According to Stoyan Borisov, head of the Bulgarian doctors’ union, between 250 and 300 doctors leave the country to work abroad every year.

Dr Kunchev, from the health ministry, confirmed the country is experiencing a serious shortage of doctors and nurses.

Earlier this week, parliamentarians proposed a special package of measures to cope with the emergency situation in the country, including monetary fines for doctors who refuse to treat patients. The package will be amended and voted on in the coming days.

Meanwhile, the government also announced it was going to increase salaries of medical staff who participate in treating COVID-19 patients by 1,000 leva ($560).

These proposed measures, however, have faced public criticism.

“I don’t think this is the right way to motivate Bulgarian medical workers with a stick – the punishment – and a carrot – the 1,000 leva. The problem here is not so much the payment, but the fact that they have to go risk their lives without having proper protection,” said Petar Cholakov, associate professor of sociology at the Institute for the Study of Societies and Knowledge at the Bulgarian Academy of Sciences.

In his opinion, part of the problem medical workers face in coping with the pandemic is that over the past decades the healthcare system in Bulgaria has deteriorated significantly.

“The healthcare provision is underfunded, and this is not a recent problem. The situation in clinics and hospitals is miserable,” said Cholakov.

He noted another problem is the inefficiency and corruption plaguing health institutions in the country.

In response to media reports about shortages in hospitals across the country, a number of individuals and businesses announced they would be donating funds to buy medical equipment and supplies. One company, Walltopia, the world’s largest manufacturer of artificial climbing walls, caused controversy when it asked the hospital receiving its donation to give priority to its employees in treatment.

“Doctors cannot choose between patients based on one giving more than the other. This is about saving a human life. A human life is not something for sale,” said Cholakov.

On Tuesday, the health ministry announced it was opening an account to accept donations to support hospitals during the state of emergency and “buy protection kits for medical personnel, supplies and equipment, including respirators”.

Dr Kunchev said despite the move, it did not mean the ministry does not have enough funds to provide these items to hospitals.

“Thanks to the quick reaction of the government, there are no limits in terms of national means to buy what is needed. The difficult part is to find these things, not with the financial means,” he said.