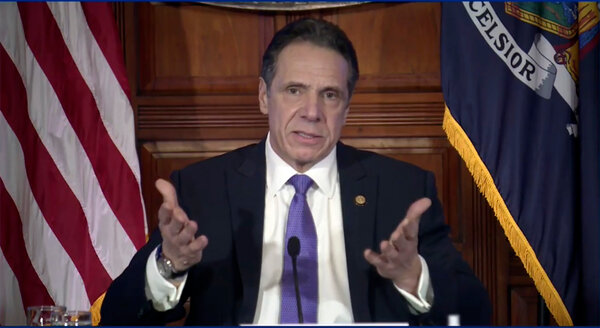 In his first news conference since a sexual harassment scandal engulfed his administration, Gov. Andrew M. Cuomo announced that New York would ease restrictions on residential and social gatherings later this month and begin to allow more people inside arts and entertainment venues.

The loosened rules, announced as New York approaches one year since Mr. Cuomo first issued shutdown orders that brought social and economic activity to a halt, mark a step forward in the state’s reopening process.

But the announcement was overshadowed by questions about the allegations against Mr. Cuomo. Since last Wednesday, Mr. Cuomo, 63, has been accused of sexually harassing two former aides and making unwanted advances at a wedding with a third woman. He has also faced a torrent of criticism in recent weeks over his administration’s handling of nursing homes during the pandemic.

At the news conference — the first time that the governor answered questions from reporters since a coronavirus briefing on Feb. 22 — Mr. Cuomo acknowledged that he unintentionally “acted in a way that made people feel uncomfortable” and said he was “sorry for whatever pain I caused anyone.”

Still, he said multiple times that he “never touched anyone inappropriately,” as two women have described, and focused largely on the intent of his actions.

Mr. Cuomo had been silent in recent days, even as Monday marked the anniversary of the state’s first confirmed case of the coronavirus, a crisis that put Mr. Cuomo and his daily briefings in the national spotlight.