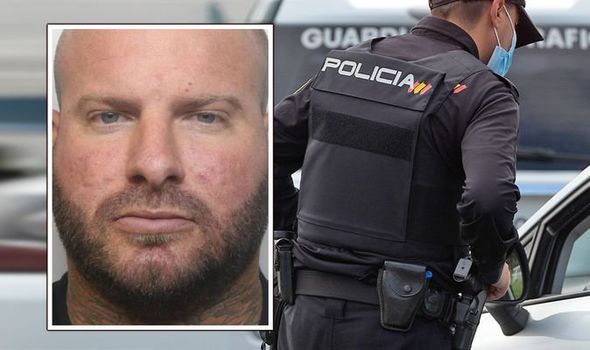 Alex Male, from Weston-super-Mare in England, has been added to the list of UK fugitives wanted by Spanish and British authorities. The 29-year-old, believed to have used the encrypted communications platform EncroChat to distribute Class A drugs, joins a dozen criminals who have fled to Spain to escape justice in the UK.

He failed to comply with his bail restrictions and went on the run in December 2020.

Male now features in the Most Wanted campaign, run by the UK National Crime Agency’s (NCA) in conjunction with independent charity Crimestoppers, which targets fugitives who have fled overseas to escape justice.

NCA officers in Spain, who are working closely with their Spanish counterparts to locate Male, are asking anyone who may have seen him or know where he is to anonymously contact Crimestoppers.

“This type of criminality has a devastating impact on our communities and he must be brought to justice.”

At around 6ft 4in tall, Male has a number of distinctive tattoos, including a skull on his neck, a full sleeve with a family tree on his left arm, the word “Live” on his right hand along, the word “Love” on his left hand, three stars on his left wrist, a full tribal sleeve tattoo from his right arm to the chest, an angel on the back.

Detective Inspector Adrian Hawkins of SW ROCU said: “Alex Male is suspected of exploiting people across the South West (of England) and has fled to Spain to live off the money he has earned.

“It is time to bring him back to the UK to face the serious charges against him.

“Any information, however small, provided anonymously, could make a difference. His appearance and distinctive tattoos mean that people cannot fail to recognise him. I urge anyone with information to do the right thing.”

The day after the Most Wanted campaign was launched in Spain last week, suspected drug trafficker Joshua Hendry — known as The Big Guy — was arrested by the Spanish National Police’s fugitives unit in the Malaga town of San Pedro de Alcántara, taking the list of British fugitives in the Mediterranean country from 12 to 11.

Hendry, from Liverpool, allegedly trafficked heroin and cocaine from Liverpool to Grimsby as part of a £1million drugs operation which has already seen his brother and mother sent to prison.

He was taken into custody and will appear in court soon as part of extradition proceedings.

Tom Dowdall, the NCA’s deputy director of international, said: “This is a rapid result and is testimony to the power these appeals can have as well as the NCA’s international reach.

“Whether it’s using tip-offs from the public, sharing intelligence or deploying specialist capabilities, UK law enforcement and our Spanish partners are working as one to trace and arrest the other 11 fugitives.

“Those men will know now that we’re after them. They can live their lives anxiously looking over their shoulders and wondering if today’s the day they get caught or they can do the right thing and hand themselves in.”

The NCA’s Mr Reynolds said: “Last week’s arrest of a fugitive 24 hours after appearing on our most-wanted list should serve as a warning to Male.

“Whether it is a tip-off from a member of the public or our specialist capabilities, we will track him down and return him to the UK.”

Anyone with information on Alex Male or any of the campaign’s most-wanted fugitives can call Crimestoppers anonymously on 0800 555 111.

A reporting form can be completed online, too.