First case in an inmate at New York’s massive Rikers Island has prompted calls for prison release where possible. 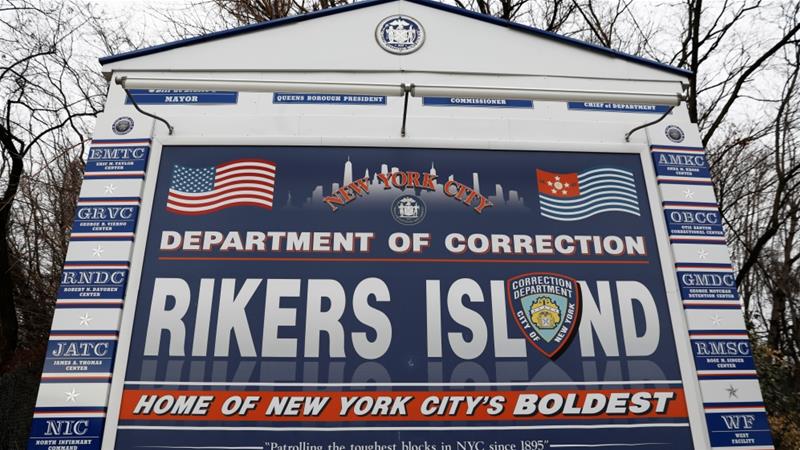 The confirmation of several coronavirus cases in the United States’s expansive prison system this week has drawn concern from health experts and families of inmates alike.

Rikers Island, a notoriously tough prison administered by the New York City Department of Corrections, saw the first confirmed case of coronavirus infection in an inmate on Wednesday. That followed prison workers with confirmed cases of the COVID-19 disease at Sing Sing and a facility in Albany, New York.

A worker at a Texas Department of Criminal Justice administrative facility tested positive, and a federal Bureau of Prisons worker in New Hampshire who may have had contact with inmates tested positive, according to local media.

The cases signal a turning point in the US prison system where the conditions could foster the spread of the coronavirus.

“People who live in congregate settings, including detainees and prisoners, are at risk of acquiring this infection,” said Dr Robert Greifinger, former chief medical officer of the New York State Department of Correctional Services.

The US has the largest prison population in the world, with roughly two million people behind bars on any day, and the highest per capita imprisonment rate. Prisons and jails across the country are overcrowded and often face less-than-ideal sanitary conditions.

Health officials across the world have stated that elderly people and those with chronic conditions are the most vulnerable to the virus, which has infected nearly 210,000 people and killed about 8,800 as of March 20, according to the World Health Organization (WHO).

The majority of inmates in US prisons are aged between 31 and 50, according to statistics from the US Bureau of Prisons. About 20 percent are more than the age of 50.

The Centers for Disease Control and Prevention (CDC) has recommended a 10-person limit on social gatherings and encouraged “social distancing”, the limitation of personal contact like handshakes and the adherence to a minimum six-foot (1.8 metres) distance between people in public.

For prisons, this is exceedingly difficult. Rikers Island, administered by the New York City Department of Correction (NYCDOC), is 1.67 square kilometres (0.64 square miles) with a daily average of 10,000 inmates but a maximum capacity of 15,000.

Many inmates at maximum-security units like Rikers or Sing Sing, which is operated by the New York State Department of Corrections and Community Supervision (DOCCS), remain alone inside their cells for 22 to 23 hours a day.

While this may sound like a quarantine of sorts, inmates rely on prison staff to provide medical care, food and sanitation. There are also required security checks.

“Needless to say, staff share the same risk” as inmates, “and staff are most likely to bring infection into correctional facilities, inadvertently”, Greifinger told Al Jazeera in an email.

Prisons are designed to limit interaction with the outside world, even without a pandemic. Prison systems nationwide have cancelled visitations, unless with necessary resources like lawyers, and prison phone operators offering short-term free phone calls.

Al Jazeera reached out to family members of inmates with underlying conditions, who asked not to be named, to ask if they had received information about prison health practices regarding the virus.

Some said no, while others said they had followed the websites of the agencies that administered the prisons in which their family members were housed.

Al Jazeera contacted prison and jail systems in New York City (NYCDOC), New York State (DOCCS) and Texas (TDCJ) to enquire about their efforts to contain the spread and disseminate information to family members of inmates.

“The health and well-being of our personnel and people in custody is of paramount importance. The Department is working in coordination with the NYC Department of Health and Correctional Health Services to identify and evaluate detainees with potential symptoms and refer them for testing as necessary” Peter Thorne, NYCDOC’s deputy commissioner for public information, said in a statement to Al Jazeera.

TDCJ Director of Communications Jeremy Desel told Al Jazeera there are “no cases of COVID-19 connected to any of our facilities” and that further information can be found on their website.

DOCCS forwarded Al Jazeera information that said it had successfully managed outbreaks of tuberculosis, AIDS, and Hepatitis C in the past. The bureau also has a comprehensive Pandemic Flu protocol that has been adjusted to deal with the coronavirus.

Still, there have been calls to release prisoners in order to mitigate the crisis from prison advocate groups and politicians alike.

Eight more inmates at Rikers were showing COVID-19  symptoms, and at least 40 have been put on a watchlist, New York City Mayor Bill de Blasio said at a news conference on Thursday, promising to release vulnerable, “low-risk” inmates as soon as Thursday.

Al Jazeera contacted the mayor’s office on Friday to confirm if releases had started but did not immediately receive a response.

The Legal Aid Society, a law firm serving low-income families and individuals in New York, filed a lawsuit on Friday, demanding the release of 116 prisoners in the New York prison system who are “particularly vulnerable to serious illness or death if infected by COVID-19, and jail conditions make it impossible to protect them”.

Senator Kamala Harris, a former prosecutor and Democratic presidential candidate, also called for the release of low-risk prisoners in a Thursday letter to US Bureau of Prisons Director Michael Carvajal.

To Greifinger, this is a step in the right direction. “The most vulnerable people in congregate settings are at high risk of death,” he said.

“To the extent possible, government agencies should reduce the risk of death by releasing detained persons in the near future,” Greifinger concluded.