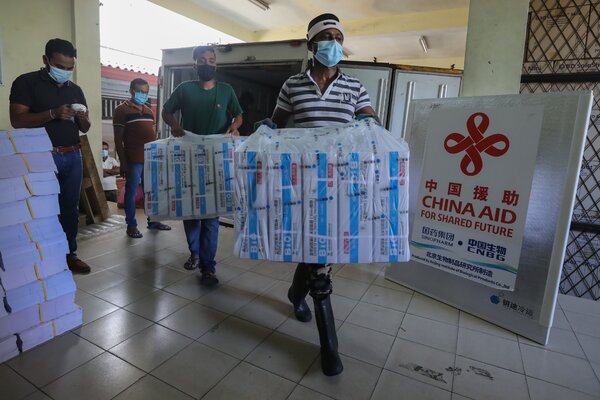 China’s top leader, Xi Jinping, said the country would provide two billion Covid-19 vaccine doses to the world this year and would donate $100 million to a global effort to distribute the doses to developing countries, as Beijing attempts to take on a more prominent leadership role in curbing the pandemic.

Mr. Xi’s pledges were announced on Thursday in a written message to an international Covid-19 vaccine cooperation forum chaired by the Chinese government. “China will continue to do everything it can to help developing countries cope with the epidemic,” Mr. Xi said.

He did not specify whether the two billion doses were donations or sales, or whether they consisted of new supplies or included those already sold. China is the world’s top exporter of Covid-19 vaccines and has sold 952 million doses worldwide, according to Bridge Consulting, a Beijing-based research company. It has also donated 33 million doses.

The $100 million donation to Covax, a global initiative backed by the World Health Organization to provide vaccines to poorer countries, would give the organization much-needed financing to strike deals with vaccine makers at a time when it has been struggling to acquire and administer doses. The world is still short of $700 million for needed vaccines, according to the W.H.O. Mr. Xi did not give a time frame for the donation.

The provision of both vaccines and money would give Beijing an opportunity to promote its reputation as a leader in public health and improve its image, which has taken a beating in the West after the pandemic. China’s donations place it in direct competition with the United States, which has sent 110 million doses abroad and purchased another 500 million doses of the Pfizer vaccine — worth about $3.5 billion — to be distributed globally through Covax.

Even with those supplies, however, the world remains short of the 11 billion doses the World Health Organization says must be distributed globally to bring the pandemic under control.

Last year, Mr. Xi promised that a Covid-19 vaccine would be a “global public good.” But in the following months, China appeared focused on mostly striking bilateral deals with countries to win good will.

This year, Beijing showed more of an interest in participating in Covax. Last month, two of China’s vaccine makers, Sinopharm and Sinovac, signed an agreement to sell Covax more than half a billion doses by the first half of next year.