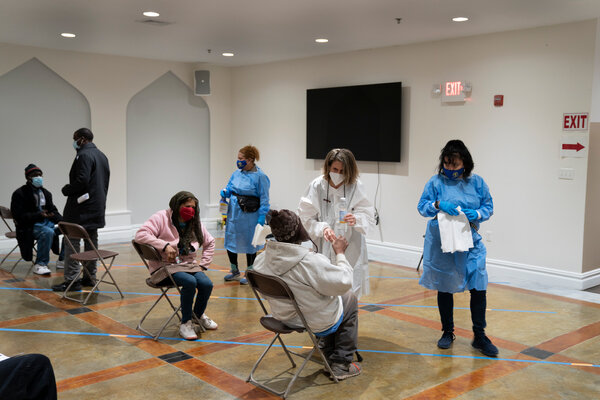 Vaccination rates are falling in the United States, despite the spread of highly contagious virus variants that are fueling the country’s alarmingly high caseload.

More than 50,000 new U.S. cases were reported on Saturday, and case rates are similar to those of the second wave last summer. But the average number of vaccine doses being administered each day, which rose for months and peaked at 3.38 million, has now fallen to 2.86 million, its lowest level since March 31, according to data from the Centers for Disease Control and Prevention.

The vaccination rate stopped climbing on April 13, when federal health officials recommended pausing the use of Johnson & Johnson’s vaccine to allow researchers to examine a rare blood-clotting disorder that emerged in six recipients. The Food and Drug Administration lifted the pause on Friday, opting to add a warning about the risk to vaccine labeling.

Experts aren’t sure why vaccination rates have begun falling, or whether vaccine hesitancy, an issue before the Johnson & Johnson pause, is entirely to blame. They suggest the issue is more complicated. Many Americans who were eager and able to be vaccinated have now been inoculated, experts believe, and among the unvaccinated, some are totally opposed while others would get a vaccine if it were more accessible to them.

Whatever the reason for the slowdown in vaccinations, it could delay the arrival of herd immunity, the point at which the coronavirus cannot spread easily because it cannot find enough vulnerable people to infect. The longer that takes, the more time there is for dangerous variants to arise and possibly evade vaccines.