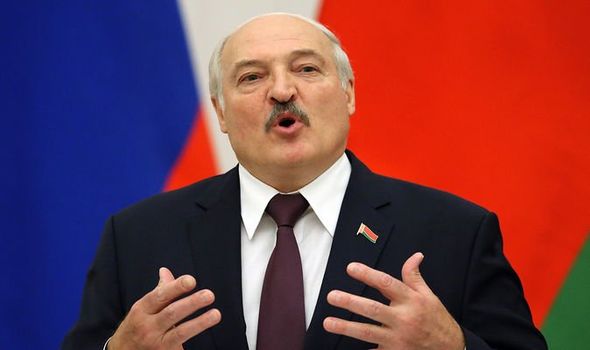 The EU accused him of attempting to destabilise it by encouraging migrants to enter.

As much as 40 percent of the bloc’s gas supply comes from Russia, with about a fifth passing through Belarus in 2020.

It is unclear how he would be able to turn off gas flowing from Russia to Poland on the Yamal pipeline, which is owned by Russia’s Gazprom.

The move would have to be approved by the Kremlin.

For the second day in a row, Russia sent nuclear-capable bombers into Belarusian airspace in a show of support for Lukashenko, who once called himself Europe’s last dictator.

Yesterday he said: “We provide heat to Europe and they are threatening us with the border closure.

“What if we block natural gas transit? I would recommend the leadership of Poland, Lithuanians and other brainless folk to think hard. We should not stop at anything to defend our sovereignty.”

In a joint statement yesterday, the defence ministers of Lithuania, Latvia and Estonia said they “unequivocally condemn the deliberate escalation of the ongoing hybrid attack by the Belarusian regime, which is posing serious threats to European security”.

It added: “Large groups are being transported to the border, where they are then forced to illegally cross.

“This increases the possibility of provocations that could also spill over into military domain.”

It claimed Belarus had enticed migrants with the false promise of easy entry to the EU as part of an “inhuman, gangster-style approach”.

Several thousand mostly Middle Eastern people, including women and children, are in freezing tents just inside Belarus, trapped between Polish and Belarusian guards.

Migrants have made several bids to breach the Polish border, protected by 15,000 troops, police and border guards. They have also tried to reach Latvia and Lithuania.

The EU is preparing more sanctions which could be approved next week. Poland has reported seven deaths in the crisis. Migrant Shwan Kurd, 33, said: “There’s no water or food here. There are children, old men and women.”