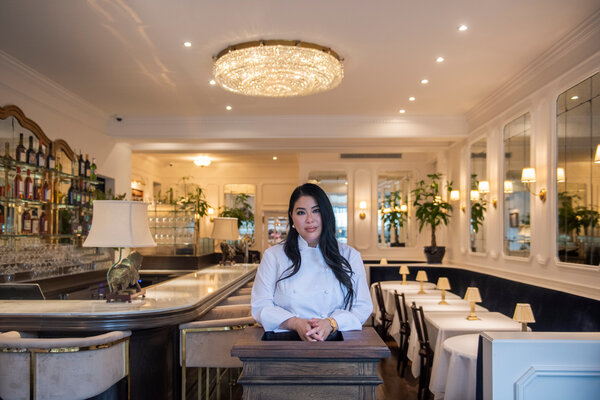 Angie Mar is entering a new stage of her career with the opening of this elegant tribute to fine dining. “This is my restaurant, not something I inherited, and I was looking for fresh ideas,” she said. Previously, she was the chef and owner at the Beatrice Inn next door, which she acquired from Graydon Carter. (That restaurant closed this year, and Ms. Mar subsequently decided to open this new place instead of recreating the Beatrice.) Now, defying current restaurant norms — bare tables, no dress code, a burger on the menu — this venture features white napery beneath a chandelier that came from the Waldorf Astoria, a French menu that tilts classic and the requirement that men wear jackets (with a supply of vintage YSL on hand). Though Ms. Mar is known for her artistry with slabs of meat, she isn’t offering steak, preferring seafood and birds. “It’s a vast departure, but what I want right now,” she said. The prix-fixe menu ($185) will change frequently but digs deep into French tradition with frog legs and artichokes in beurre blanc, a mousse of veal brains with truffles, sweetbreads wrapped in cabbage, Dover sole with sorrel mousseline, pithiviers (a pastry dome) of crab, and roast pheasant for two. There will be a croquembouche for dessert. Her inspiration comes from chefs like André Soltner and Jacques Pépin; a painting by Mr. Pépin hangs near the bar. Except for a Hungarian Tokay, the wine list is all French and American, and the salonlike room seats 37, plus nine at the bar. Banquettes in inky blue, which Ms. Mar said was the color of her father’s favorite sweatshirt, contrast the creamy ivory of the walls, and touches of that shade show up in the staff’s Christian Siriano-designed outfits. The restaurant’s name, which translates to the three horses, is a nod to what her family called her and her two brothers. (Opens Thursday)