Democrats control the U.S. Senate by a single vote. President Biden has placed bipartisanship near the top of his agenda. Republican senators are pushing for deals, including on Covid-19 during a meeting on Monday with the president. On the economy, on immigration, on health care — the Biden administration will need votes from every senator it can get.

Which is where Kyrsten Sinema and Mark Kelly come in.

Arizona’s two Democratic senators, both moderates, have assumed unusual stature amid all the talk about bipartisanship. Ms. Sinema made waves and frustrated progressives last month when she aligned with Republicans to maintain the filibuster, which empowers the minority party. Mr. Kelly was part of a bipartisan group of 16 senators who recently met with White House officials to discuss Covid relief. The pair represent a state that Mr. Biden narrowly flipped in November; pleasing Arizona is a new Democratic priority.

But if Ms. Sinema and Mr. Kelly are emerging as players in Washington, the politics back home are more complicated. Arizona Democratic Party officials and activists threw themselves into the two senators’ races, despite the fact that many of these Democrats are more progressive than either Ms. Sinema or Mr. Kelly. Now they are eager for their senators not just to embrace the middle, but also to adopt the policies the left is pressing for as well. Many view the senators’ openness to Republicans with skepticism. 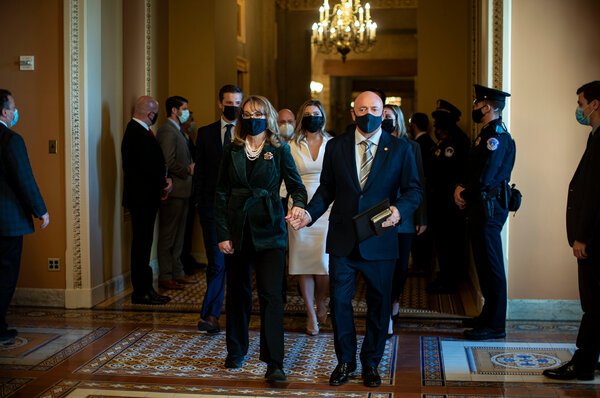 “So many things went into Kelly and Sinema’s victory that no one effort can take credit, but also everything was necessary, so nothing can be sacrificed,” said Ian Danley, the executive director of Arizona Wins, who helped coordinate voter outreach among dozens of liberal organizations last year. “They’re both in a tough spot. Those different strategies from a policy perspective can be in conflict.”

Ms. Sinema, who was elected in 2018, and Mr. Kelly, who won last year, both ran for office on bipartisan approaches to government. And given the narrow Democratic control in the Senate, both senators are likely to prove essential to the Biden agenda as well as any major legislative deal-making on issues central to the state, including immigration, health care and Covid relief.

Their importance was on clear display last week when Vice President Kamala Harris included the Phoenix ABC affiliate and The Arizona Republic’s editorial board in a round of interviews as she promoted the administration’s Covid relief package. Though Ms. Harris did not mention Ms. Sinema or Mr. Kelly by name, she left no doubt that their loyalty was paramount.

“If we don’t pass this bill, I’m going to be very candid with you: We know more people are going to die in our country,” Ms. Harris said in the interview with The Republic. “More people will lose their jobs and our children are going to miss more school. We’ve got to be here collectively to say that that is not an option in America.”

That same day, Ms. Harris offered similar comments to a television station and newspaper in West Virginia. Later, Senator Joe Manchin III, a Democrat who has represented the state since 2010 and relishes his reputation as an independent, voiced his own frustration, saying her interview was “not a way of working together.”

Ms. Sinema and Mr. Kelly made no such comments, and some progressives viewed their silence as worrisome.

“We need to be able to depend on these senators that we worked so hard to elect,” said Tomás Robles, an executive director of LUCHA, a civil rights group that knocked on tens of thousands of doors in Arizona for Democrats last year. “If they’re going to act like a moderate Republican, we will remember by the time elections come. We expect them to recognize that Latinos voted overwhelmingly for those two, and we expect them to repay our loyalty.”

For many immigration activists, a sense of pessimism has already begun to sink in. They fear that Democrats will try to strike a deal with Republicans who are unlikely to approve the sweeping changes Mr. Biden has proposed — similar to the strategy that failed during the Obama administration.

Erika Andiola, a Phoenix-based immigration activist, became the first known undocumented congressional aide when she worked for Ms. Sinema in 2013, drawn to what she saw as Ms. Sinema’s intense interest and commitment in the issue. Now, Ms. Andiola said she viewed her former boss as moving to a more conservative stance on immigration — more often emphasizing border security than creating a path to citizenship for the roughly 11 million undocumented immigrants living in the United States.

“There is a window of time now and there is a way for Democrats to get something done on immigration — and they can do it on their own,” Ms. Andiola said. “In the moment of crisis, you have to choose your battles, you have to choose what you can win. Pick the right strategy. Compromising with Republicans is not going to get us anywhere.”

Both Ms. Sinema and Mr. Kelly declined to be interviewed for this article, but statements from their offices emphasized bipartisanship and border security, as well as support for Dreamers, who were brought to the United States as children of unauthorized immigrants and have been threatened with deportation at times.

Mr. Kelly is already part of the group of 16 senators tasked with finding bipartisan agreement on the relief package. Ms. Sinema has been one of the most outspoken critics of Arizona’s response to the pandemic, and some Arizona Democrats believe she will be supportive of the Biden administration’s package.

Raquel Terán, the newly elected chair of the Arizona Democratic Party and a state representative, acknowledged that the two senators “didn’t campaign on the progressive end of spectrum.” But she said that while there might be some disagreements, she expected both to side with Mr. Biden on the relief package, health care and immigration.

“They will vote for the Democratic agenda, the agenda that Joe Biden has put forward — they supported him in the election and what they put on the table, so I am hopeful,” Ms. Terán said. “I hope that they will do everything to ensure that his agenda is not blocked.”

Arizona has a long history with high-profile, independent-minded senators willing to buck party lines, and others who amassed political power — John McCain and Jon Kyl were long seen as two of the most influential senators during their time in office, and Jeff Flake became one of the first Republicans in the Senate to openly criticize former President Donald J. Trump.

“There is no state in America that is going to play a more pivotal role in the direction of congressional legislation in the next two years,” said Glenn Hamer, the president of the Arizona Chamber of Commerce. “Every major piece of legislation is going to go right through Arizona, and the role many of us want our senators to play is as someone who reaches across the aisle.”

Many Democrats point out that the political atmosphere of the state has changed drastically since 2018, with voters flipping both Senate seats and a Democrat presidential candidate winning in Arizona in November for only the second time in five decades. And since the riot in Washington last month, more than 5,000 Republicans have dropped their party affiliation.

Still, Mr. Hamer warned that both senators were in a precarious political position, particularly Mr. Kelly, who won a special election and is up for re-election in 2022. (The Chamber of Commerce endorsed his opponent in the election last year, and did not make an endorsement in Ms. Sinema’s race.)

Approving major changes like a $15-an-hour minimum wage or an immigration package that does not include more enforcement, Mr. Hamer said, would turn off the moderate voters who also helped propel the pair to Washington.

“I don’t believe you can have unity in America without bipartisan legislation, and I really believe both of them have a role to play in that,” he said. “That would be far better and more durable than trying to blow up the filibuster.”

Mr. Danley, a longtime liberal activist, similarly warned that the two senators could not take new voters in the state for granted.

“If we’re going to turn out voters who support you, we need ammunition, we need to have something that is real and legitimate,” Mr. Danley said. “We can’t keep going out saying they are better than the bad guys — that is too low of a bar. What about actually being good for these folks who showed up and who have expectations?”