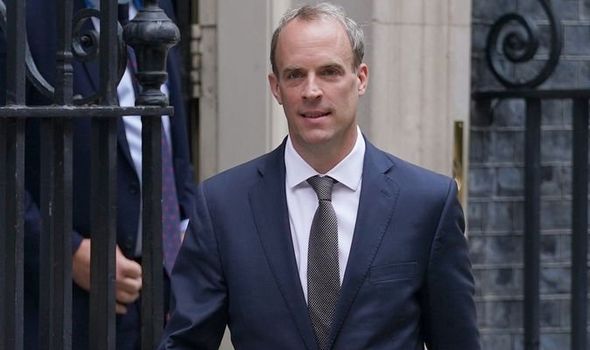 Asked yesterday if he was going to resign, Mr Raab gave a one-word answer to reporters in Downing Street: “No.”

The minister was reportedly “unavailable” during his family break in Crete when officials in his department suggested he phone Hanif Atmar urgently.

The Afghan foreign ministry then refused to arrange a call with junior minister Zak Goldsmith, pushing it back to the next day.

Mr Raab, 47, was also condemned for not returning from holiday sooner as Afghanistan descended into chaos. He landed back in the UK on Monday – the day after Kabul fell to the Taliban.

Labour, the SNP, Liberal Democrats and Plaid Cymru said he failed to “perform his basic duties” and was “no longer fit” to represent the country.

They say he should either quit or be sacked by PM Boris Johnson.

He said: “If he didn’t make the call, I’m shocked. How could somebody do something like that in this chaotic situation?

“The interpreters and their families could be killed at any time.” Labour leader Sir Keir Starmer said: “Who wouldn’t make a phone call if they were told it could save somebody’s life?”

Shadow foreign secretary Lisa Nandy accused Mr Raab of “yet another catastrophic failure of judgment”. She said: “If Dominic Raab doesn’t have the decency to resign, the Prime Minister must show a shred of leadership and sack him.”

Ms Nandy’s views were echoed by Liberal Democrat foreign affairs spokeswoman Layla Moran, who said: “Dominic Raab must resign today. Right now, there are interpreters across Afghanistan who are surrounded by the Taliban and fearing the worst.

“All the Foreign Secretary had to do was leave the beach and pick up the phone. He did not. He has shamed Britain and is no longer fit to represent our country.” Mr Raab, who was said to be staying at the exclusive Amirandes hotel on the Greek island, insisted that while he was away he had been directing his team and engaging with international partners.

The five-star venue describes itself as a “boutique resort” which is “styled after the sprawling palaces of the Minoan kings and Venetian nobles who once ruled Crete” and offers “the easy elegance of true European luxury”.

With a meeting of G7 leaders pencilled in for next week, Mr Raab spent yesterday afternoon talking to his opposite numbers in the group to discuss the Afghan crisis and international co-operation.

Since his return to London he has been spearheading a diplomatic blitz to encourage allies to match the UK’s commitment to take in Afghan refugees.

Britain has announced it will take up to 20,000 people looking to leave Afghanistan as part of its resettlement scheme. Up to 10,000 are due in the next 12 months.

Mr Raab chaired a call of G7 foreign and development ministers from Canada, France, Germany, Italy, Japan and the United States, as well as the High Representative of the European Union.

In a statement, he said his counterparts backed Britain’s commitment to ending violence, respecting international law and human rights, especially for women, children and minorities.

They also supported inclusive talks about the country’s future.

“They concurred that the Taliban must ensure that Afghanistan does not become host to a terrorist threat to international security.”

Defence Secretary Ben Wallace said the suggested phone call to Mr Atmar would not have made “any difference whatsoever”, as the Afghan government was “melting away quicker than ice”.

Health Secretary Sajid Javid said he was “proud” to work with Mr Raab, calling him as a professional and effective person who makes an “excellent Foreign

Secretary”. He also hit back at calls by opposition parties for Mr Raab to resign, accusing them of “political games”.

Conservative Lord Naseby, a former Commons deputy speaker, said he was not asking Mr Raab to quit but urged the Foreign Secretary to “think about” what has happened with Afghanistan.

The peer cited the decision of Lord Carrington to resign as foreign secretary over the Argentine invasion of the Falklands in 1982.

Lord Naseby, who served as an MP for 23 years, recalled a meeting between Lord Carrington and Tory MPs over the invasion.

He said: “He made a statement and not long after he decided on balance he had to resign.

“Now that’s for Raab to think about. It all comes down to ministerial responsibility. The Foreign Secretary needs to think about these things.”