It comes just months after the creation of the Special Operation Brigade was announced by former SAS commander General Sir Mark Carleton-Smith, who currently heads the British Army. Under his vision, four “all arms” battalions, each containing 250 special purpose Ranger units, will support the SAS and deploy on training and advisory missions across the globe. Gen Carleton-Smith revealed his future plans while speaking at the Atlantic Council, a non-partisan organisation that galvanises US leadership and engagement in the world.

“Within the next 12 months I want to stand up the first Ranger battalion in order to act as the vanguard for Army’s Special Operations Brigades“ he said.

“I want to see it deployed potentially in east Africa in support of our regional East African partners.

Though he did specify where it would be sent or for how long, sources last night confirmed the troops are to be based in Somalia, where they will train the country’s special forces in counter insurgency tactics to allow them to take on All-Shabab.

Al Shabab is affiliated to Al Qaeda and currently battling the United Nations backed government in Somalia where government troops are reported to be poorly trained and equipped.

Banned as a terrorist group by both the US and the UK, it is believed to have between 7,000 and 9,000 fighters, many of whom are young men with little  chance of employment.

Somalia’s government blamed it for the killing of at least 500 people in Mogadishu in October 2017 during what has been labelled as Africa’s biggest terrorist bomb. 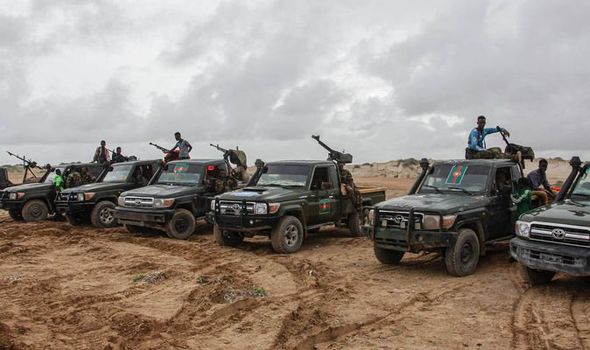 Al Shabab also carried out a massive attack on a Kenyan military base in el-Ade, Somalia, in January 2016 which killed 180 soldiers.

It has also staged several attacks in Kenya, including the 2015 massacre at Kenya’s Garissa University, near the border with Somalia.

A total of 148 people died when gunmen stormed the university at dawn and targeted Christian students.

The US has issued a $6m (£4.5m) bounty for information leading to the capture of the group’s leader Ahmad Umar, also known as Abu Ubaidah.

An announcement confirming Somalia as the location of the Army Rangers’ first operation is expected to be made during next month’s G7 summit in Cornwall.

“Our people will replace US Special Forces who have been training Somali forces,”’ said a source last night.

“It will be challenging, but the Rangers have been formed for precisely this sort of role.”