A new rule coming from the Biden administration will allow “all students” to tap into some $36 billion in emergency stimulus funds flowing to colleges, including direct grants for those most in need. 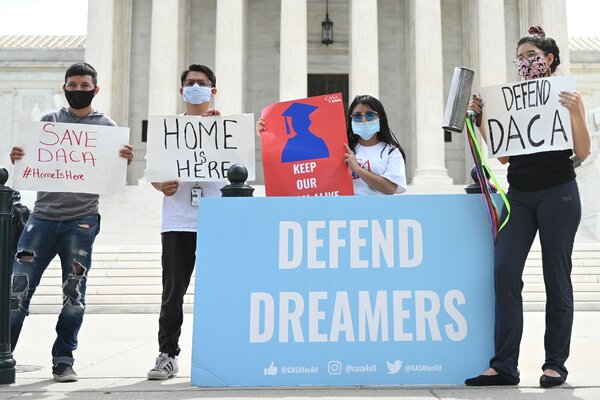 The Biden administration said early Tuesday that it would issue a regulation allowing undocumented students access to some of the $36 billion in emergency stimulus aid flowing to colleges, a split from a Trump-era decision to bar those students — even among the federally protected ones known as Dreamers — from accessing earlier rounds of funding.

“The pandemic didn’t discriminate on students,” Miguel Cardona, the education secretary, told reporters during a phone call on Monday that previewed the administration’s plans. “We know that the final rule will include all students, and we want to make sure that all students have an opportunity to have access to funds to help get them back on track.”

The decision is a 180-degree pivot from attempts made by Trump administration officials to block most immigrant students from accessing aid. Last June, Betsy DeVos, the education secretary for Donald J. Trump, issued an emergency rule that barred international and undocumented students — including tens of thousands of so-called Dreamers protected under the Deferred Action for Childhood Arrival program — from accessing an earlier round of more than $6 billion in emergency relief funds. That decision was quickly met by legal challenges.

For months, Biden administration officials considered whether to extend emergency benefits to undocumented students, who are not eligible for other forms of student aid. Under existing welfare laws, undocumented immigrants remain largely ineligible to receive money from federal programs, including funds provided by the $1.9 trillion pandemic relief package that President Biden signed on March 11.

On Monday evening, a spokeswoman with the Education Department, who was not authorized to publicly detail the planning, said that the administration had the authority to disperse funds to undocumented students through the Higher Education Emergency Relief Fund established as part of the $2.2 trillion CARES Act that former President Trump signed in March of last year, and that Congress had “not drawn sharp lines around who is a student” when determining who could receive money from that fund.

Existing eligibility requirements for the fund “makes it clear that emergency financial aid can support all students who are or were enrolled in an institution of higher education during the COVID-19 national emergency, and it is up to the institution to distribute the funding to students most in need,” the spokeswoman said in a statement. (Last year, Ms. DeVos relied on a similarly vague definition to create the Trump-era rule.)

Previewing the decision to reporters, Mr. Cardona framed it as a matter of expediency: “What it does is really simplify the definition of a student. It makes it easier for colleges to administer the program and get money in the hands of students sooner.”

About half of the $36 billion earmarked for colleges will go directly to students, Mr. Cardona said, and some $10 billion will be dispersed to community colleges.

Aside from direct grants to individual students, the funds are expected to be used to bolster academic support services, purchase laptops, and expand mental health programs. All students, including those who have not previously formally applied for federal aid, are now eligible for aid, according to the Education Department.