HOUSTON — Voting in the 2020 election presented Zoe Douglas with a difficult choice: As a therapist meeting with patients over Zoom late into the evening, she just wasn’t able to wrap up before polls closed during early voting.

Then Harris County introduced 24-hour voting for a single day. At 11 p.m. on the Friday before the election, Ms. Douglas joined fast-food workers, nurses, construction workers, night owls and other late-shift workers at NRG Arena, one of eight 24-hour voting sites in the county, where more than 10,000 people cast their ballots in a single night.

“I can distinctly remember people still in their uniforms — you could tell they just got off of work, or maybe they’re going to work; a very diverse mix,” said Ms. Douglas, 27, a Houston native.

Twenty-four-hour voting was one of a host of options Harris County introduced to help residents cast ballots, along with drive-through voting and proactively mailing out ballot applications. The new alternatives, tailored to a diverse work force struggling amid a pandemic in Texas’ largest county, helped increase turnout by nearly 10 percent compared with 2016; nearly 70 percent of registered voters cast ballots, and a task force found that there was no evidence of any fraud. 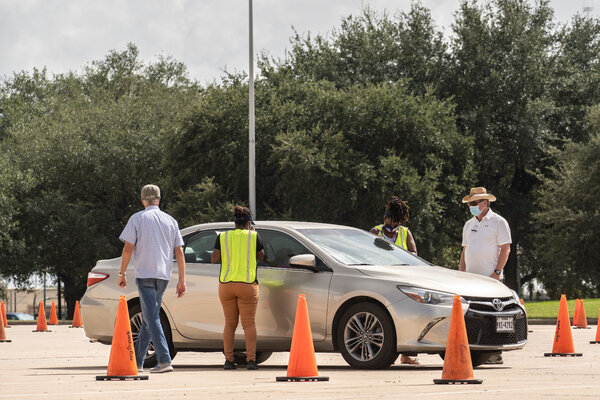 Yet Republicans are pushing measures through the State Legislature that would take aim at the very process that produced such a large turnout. Two omnibus bills, including one that the House is likely to take up in the coming week, are seeking to roll back virtually every expansion the county put in place for 2020.

The bills would make Texas one of the hardest states in the country to cast a ballot in. And they are a prime example of a Republican-led effort to roll back voting access in Democrat-rich cities and populous regions like Atlanta and Arizona’s Maricopa County, while having far less of an impact on voting in rural areas that tend to lean Republican.

Bills in several states are, in effect, creating a two-pronged approach to urban and rural areas that raises questions about the disparate treatment of cities and the large number of voters of color who live in them and is helping fuel opposition from corporations that are based in or have work forces in those places.

In Texas, Republicans have taken the rare tack of outlining restrictions that would apply only to counties with population of more than one million, targeting the booming and increasingly diverse metropolitan areas of Houston, Austin, San Antonio and Dallas.

Most of Harris County’s early voters were white, according to a study by the Texas Civil Rights Project, a nonprofit group. But the majority of those who used drive-through or 24-hour voting — the early voting methods the Republican bills would prohibit — were people of color, the group found.

“It’s clear they are trying to make it harder for people to vote who face everyday circumstances, especially things like poverty and other situations,” said Chris Hollins, a Democrat and the former interim clerk of Harris County, who oversaw and implemented many of the policies during the November election. “With 24-hour voting, there wasn’t even claims or a legal challenge during the election.”

The effort to further restrict voting in Texas is taking place against the backdrop of an increasingly tense showdown between legislators and Texas-based corporations, with Republicans in the House proposing financial retribution for companies that have spoken out.

American Airlines and Dell Technologies both voiced strong opposition to the bill, and AT&T issued a statement supporting “voting laws that make it easier for more Americans to vote,” though it did not specifically mention Texas.

American Airlines also dispatched Jack McCain, the son of former Senator John McCain, to lobby Republicans in Austin to roll back some of the more stringent restrictions.

Republicans in the State Legislature appear unbowed. In amendments filed to the state budget this week, House Republicans proposed that “an entity that publicly threatened any adverse reaction” related to “election integrity” would not be eligible for some state funds.

While those amendments will need to be voted on, and may not even rise to the floor for a vote, placing them on the record is seen by lobbyists and operatives in Austin as a thinly veiled warning to businesses to stay quiet on the voting bills.

The Perryman Group, an economic research and analysis firm based in Waco, said in a recent study that implementing controversial voting measures could lead to conferences or events being pulled from the state, and prompt businesses or workers to shun it. The group estimated that restrictive new laws would lead to a huge decrease in business activity in the state by 2025 and cost tens of thousands of jobs.

Among the restrictions in two omnibus bills in the Texas Legislature are a ban on 24-hour voting, a ban on drive-through voting and harsh criminal penalties for local election officials who provide assistance to voters. There are also new limits on voting machine distribution that could lead to a reduction in numbers of precincts and a ban on encouraging absentee voting.

The bills also include a measure that would make it much more difficult to remove a poll watcher for improper conduct. Partisan poll watchers, who are trained and authorized to observe the election on behalf of a candidate or party, have occasionally crossed the line into voter intimidation or other types of misbehavior; Harris County elections officials said they had received several complaints about Republican poll watchers last year.

Mr. Hollins, the former Harris County clerk, said Republicans recognized that “Black and brown and poor and young people’’ use the flexible voting options more than others. “They’re scared of that,” he said.

While Republican-controlled legislatures in Georgia and Arizona are passing new voting laws after Democratic victories in November, Texas is pushing new restrictions despite having backed former President Donald J. Trump by more than 600,000 votes. The effort reflects the dual realities confronting Republicans in the State Legislature: a base eager for changes to voting following Mr. Trump’s 2020 loss and a booming population that is growing more diverse.

Senator Bryan Hughes, a Republican from northeastern Texas who sponsored the State Senate bill, defended it as part of a long effort to strengthen “election security” in Texas.

“I realize there’s a big national debate now, and maybe we’re getting sucked into that, but this is not something new to Texas,” Mr. Hughes said in an interview. He said that lawmakers were seeking to roll back mail voting access because that process was more prone to fraud. He offered no proof, and numerous studies have shown that voter fraud in the United States is exceptionally rare.

Mr. Hughes said that the proposed ban on drive-through voting stemmed from the difficulty of getting access for partisan poll watchers at the locations and that 24-hour voting was problematic because it was difficult to find poll watchers for overnight shifts.

But many voters in Harris County, whose population of 4.7 million ranks third in the country and is bigger than 25 states’, see a different motive.

Kristie Osi-Shackelford, a costume designer from Houston who was working temporary jobs during the pandemic to help support her family, used 24-hour voting because it offered her the flexibility she needed as she juggled work and raising her three children. She said that it had taken her less than 10 minutes.

“I’m sure there are people who may not have gotten to vote in the last couple of elections, but they had the opportunity at night, and it’s kind of sad that the powers that be feel like that has to be taken away in order to, quote unquote, protect election integrity,” Ms. Osi-Shackelford said. “And I struggled to find words, because it’s so irritating, and I’m tired. I’m tired of hearing the same stuff and seeing the same stuff so blatantly over and over again for years.”

Brittany Hyman, 35, was eight months pregnant as Election Day was drawing near and was also raising a 4-year-old. Fearful of Covid-19 but also of the sheer logistics of navigating a line at the polls, Ms. Hyman voted at one of the drive-through locations.

“Being able to drive-through vote was a savior for me,” Ms. Hyman said. She added that because she had been pregnant, she probably wouldn’t have risked waiting in a long line to vote.

Harris County’s drive-through voting, which more than 127,000 voters took advantage of in the general election, drew immediate attention from state Republicans, who sued Mr. Hollins and the county in an attempt to ban the practice and discard any votes cast in the drive-through process. The Texas Supreme Court ruled against the Republicans in late October.

Other provisions in the G.O.P. bill, while not aimed as directly at Harris County, will most likely still have the biggest impact in the state’s biggest county. One proposal, which calls for a uniform number of voting machines to be deployed in each precinct, could hamper the ability to deploy extra machines in densely populated areas.

This month, in a further escalation of public pressure on legislators, Mayor Sylvester Turner of Houston, a Democrat, gathered more than a dozen speakers, including business executives, civil rights activists and former athletes, for a 90-minute news conference denouncing the bill.

“What is happening here in Texas is a warning shot to the rest of the country,” said Lina Hidalgo, the Harris County judge and a Democrat who has pushed for continued expansion of voting access in the county. “First Georgia, then Texas, then it’s more and more states, and soon enough we will have taken the largest step back since Jim Crow. And it’s on all of us to stop that.”