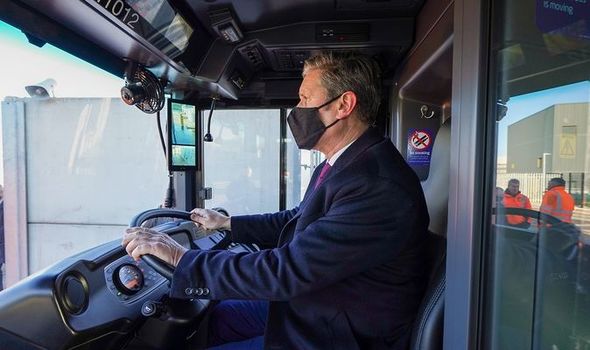 He said the party has changed since its brutal defeat in 2019 under Jeremy Corbyn. The Labour leader made the comments in Birmingham as he unveiled a new “contract with the British people”. Remainer Sir Keir, who later sat in the driver’s seat of a hydrogenpowered bus at the city’s Tyseley Energy Park, vowed to “make Brexit work”. He insisted he and his party are “patriotic” as he stood in front of two Union flags.

Sir Keir said: “Trust has to be earned. I am confident but not complacent about the task ahead.” Labour started 2022 ahead in the polls, but pollsters Redfield and Wilton Strategies showed the Tories have rebounded and are just three points behind Labour.

Conservative party chairman Oliver Dowden said: “Instead of building trust, Sir Keir’s out of touch and without a plan.”

SIR Keir has backed Tony Blair after almost 650,000 people signed a petition calling for the former Prime Minister’s knighthood to be revoked. The Labour leader, who was knighted in 2014, called Blair “a very successful prime minister” who had made a huge difference to Britain.

Of Boris Johnson’s possible knighting, he said: “I don’t think this prime minister has earned the right to have an honour. I do think Tony Blair has.”