WASHINGTON — In a remarkable display of loyalty to Donald J. Trump, Republicans moved quickly to purge Representative Liz Cheney of Wyoming from House leadership on Wednesday, voting to oust their No. 3 for repudiating the former president’s election lies and holding him responsible for the deadly Jan. 6 riot at the Capitol.

The action, orchestrated by party leaders, came by voice vote during a raucous closed-door meeting on Capitol Hill that lasted just 15 minutes. With the votes stacked against her, Ms. Cheney made a defiant final speech rather than fight the ouster, warning that Republicans would follow Mr. Trump to their “destruction” by silencing dissent and refusing to reject the myth of a stolen election. She drew boos from her colleagues.

After months of infighting that erupted after the violent end to his presidency, Republicans’ unceremonious ouster of Ms. Cheney, the scion of one of the nation’s most powerful conservative families, reflected how far the party has strayed from the policy principles and ideological touchstones that once defined it. The vote — and the manner in which it unfolded — illustrated how Republican Party orthodoxy has come to be defined more by allegiance to a twice-impeached former president who prizes loyalty over all else than by a political agenda or a vision for governing.

It came as more than 100 Republicans, including some prominent former elected officials, said they were considering breaking off and creating a third party if the G.O.P. failed to make major changes to extricate itself from Mr. Trump’s stranglehold and what it called “forces of conspiracy, division and despotism.”

In an unrepentant last stand minutes before Republicans voted to strip her of her post, Ms. Cheney urged her colleagues not to “let the former president drag us backward,” according to a person familiar with the private comments. She said that if the party wanted a leader who would “enable and spread his destructive lies,” they should vote to remove her, because they had “plenty of others to choose from.”

“I will do everything I can to ensure that the former president never again gets anywhere near the Oval Office,” Ms. Cheney told reporters afterward. “We have seen the danger that he continues to provoke with his language. We have seen his lack of commitment and dedication to the Constitution.”

Ms. Cheney’s public comments on Wednesday were an unmistakable jab at Representative Kevin McCarthy of California, the minority leader. After the deadly assault on the Capitol by Mr. Trump’s supporters, Mr. McCarthy said the former president had been responsible for the violence and should have quickly called off rioters who were threatening the lives of members of Congress and his own vice president. But he quickly walked back the criticism, which had enraged Mr. Trump, and since then he has arguably done more than anyone else in his party to keep the former president in the fold. 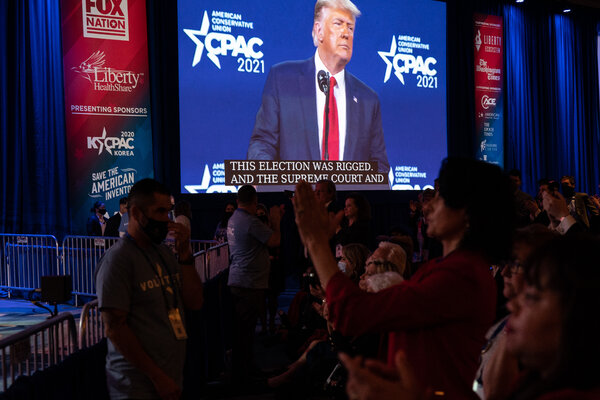 After backing her in a previous leadership challenge, based on her vote to impeach Mr. Trump, Mr. McCarthy had come to see Ms. Cheney as a distraction and political liability in his quest to regain the House majority and become speaker.

For her part, Ms. Cheney made it clear that she regarded her ouster as a historic mistake, and intended to continue to be vocal in her criticism. She invited David Hume Kennerly, a former official White House photographer under President Gerald R. Ford with deep ties to her family, to record the day behind the scenes, and defended her stance in a lengthy television interview with NBC less than an hour after the vote.

It represented a remarkable arc for the daughter of former Vice President Dick Cheney, a stalwart Republican who became a despised figure among the left for advancing the claim that Iraq had weapons of mass destruction, a falsehood that drove the nation to war. On Wednesday, though, Democrats lavished praise on Ms. Cheney for her refusal to spread a lie, with Speaker Nancy Pelosi calling her “a leader of great courage, patriotism and integrity,” and pointing to her removal as a troubling sign for Republicans.

“For the sake of our democracy, reasonable Republicans across the country must take back their party,” Ms. Pelosi said.

Behind closed doors in the Congressional Auditorium, a blue-carpeted, wood-paneled hall where Republicans sat in theater-style seats, Ms. Cheney took to the stage on Wednesday morning to make her parting plea, drawing jeers as she warned her colleagues about the consequences of their current course. She ended with a prayer quoting from the Book of John — “Ye shall know the truth, and the truth shall set you free” — and asking God to “help us to remember that democratic systems can fray and suddenly unravel.”

“When they do,” she added, “they are gone forever.”

Republicans made it clear they were not interested in those reminders.

“She who thinks she leads, but has no followers, is only taking a walk,” said Representative Virginia Foxx, Republican of North Carolina, as she made the motion to recall Ms. Cheney, according to a statement her office released afterward. “Liz, I’m afraid you’re a woman who is only taking a walk right now. You have lost your followers.”

Republican leaders, who portrayed Ms. Cheney’s removal as a way to unify the party, declined to allow members to register a position on it. When Representative Tom Reed of New York, a moderate who has announced his retirement from Congress, rose to ask whether a recorded vote was allowed, he was told no. Mr. McCarthy had told his colleagues that a voice vote was important to show “unity,” and that it was time to “move forward” and look toward winning back the House, according to a person familiar with the remarks.

When the time came, the ayes loudly drowned out the noes. The ouster was so swift that some Republicans were still trickling in to take their seats when Ms. Cheney strode up the center aisle to make her way to a bank of microphones and reporters waiting outside.

At the White House later in the day, speaking to reporters after meeting with President Biden and other congressional leaders on infrastructure, Mr. McCarthy brushed off a question about comments by Representative Elise Stefanik of New York, whom he has anointed to succeed Ms. Cheney. Ms. Stefanik had echoed some of Mr. Trump’s false claims around widespread voter fraud.

“I don’t think anybody is questioning the legitimacy of the presidential election,” he said. “I think that is all over with.”

Representative Jim Jordan, Republican of Ohio, who helped lead the charge against Ms. Cheney, said his case boiled down to a simple idea: “Can’t have a conference chair who recites Democrat talking points.”

Understand the Removal of Liz Cheney

House Republicans voted on May 12 to oust Representative Liz Cheney of Wyoming from their leadership ranks for her refusal to stay quiet about President Donald J. Trump’s election lies.