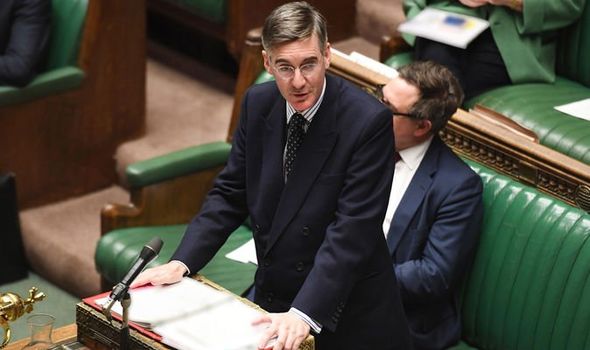 Mr Rees-Mogg also dismissed the uproar among MPs for having to queue for 45 minutes last week as they voted for the first time in person since the coronavirus lockdown. He said that a new system that will allow MPs to beep their passes to register their votes is expected to be introduced this week and should speed up the system. He said: “I don’t think MPs should be ashamed about queuing for 45 minutes.

“I don’t think that was an impossible burden to put on members of parliament.

“It’s something our constituents are quite used to.”

Virtual sittings were scrapped last week but some MPs said they were effectively being stripped of their votes because they were shielding or looking after children so could not return to Westminster.

The Commons leader said proxy voting will be available for MPs “with a particular need”.

He added: “I think everyone has sympathy for people with parental responsibilities.

“It is such an important responsibility for all of us.

“As it happens, this evening, I shall be moving a motion on sitting Fridays and one of my children is going to have to come into the House of Commons and sit in my office whilst I’m doing this because there is no one else to look after her because my family are at home in Somerset.

“This is very complicated and I can sympathise with members, and I have some experience of it, inevitably.”

Mr Rees-Mogg said that about seven weeks of the government’s legislative programme had been lost during the lockdown.

He said MPs had a “leadership role” and the government wanted to get “back to normal in the same way that schools were”.

“It’s very much the House of Commons moving with the country at large, so we were moving as the country was beginning to open up,” he added.

Karen Bradley, the chairman of the Procedure Committee, raised fears that MPs will be stopped from going to Parliament if there is a local lockdown or from being able to return to the area if they were in Westminster when it was imposed.

Mr Rees-Mogg said there had not yet been any localised restrictions so the scenario was “very hypothetical”.