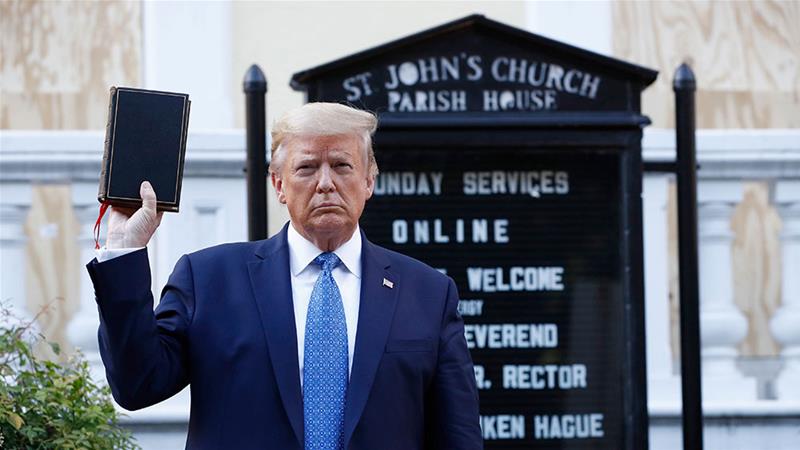 Pat Robertson, an influential Christian leader in the United States, has rebuked President Donald Trump for his threats to call in the US military against civilians and his hardline stance against the recent protests over the killing of George Floyd, an unarmed Black man, at the hands of a white police officer on May 25.

Robertson opened his nightly “700 Club” television show on Tuesday by saying the political moment in the US now calls for compassion and reassurance, not the threats of dominance and military force that President Trump offered in recent days.

“It seems like now is the time to say, ‘I understand your pain. I want to comfort you. I think it’s time we love each other’. But the president took a different course. He said, ‘I am the president of law and order’,” Robertson said.

“And he issued a heads up. He said: ‘I’m ready to send in military troops if the nation’s governors don’t act to quell the violence that has rocked American cities’. Matter of fact, he spoke of them as being jerks,” Robertson said.

The rebuke was surprising because Robertson, who is one the founding leaders of the white, evangelical Christian movement in the US, has been a consistent supporter of Trump. His television show, begun in 1966, is seen by an estimated one million Americans every day.

One in four American adults belong to an evangelical Christian denomination and they voted 81 percent for Trump in 2016, according to the Pew Research Center, a non-partisan group.

Trump sparked controversy earlier this week when he posed for photographs in front of an historic Episcopal church near the White House that had been briefly set on fire by protesters on June 1. Episcopalians are not considered evangelical Christians.

Federal police in riot gear and on horseback had forcefully cleared a city park so that Trump and top officials could walk to the church.

There have been signs recently that Trump’s political support among evangelicals may be eroding.

An evangelical magazine founded by the late Reverend Billy Graham published an editorial on December 19 during Trump’s impeachment in Congress calling for his removal from office for “gross immorality and ethical incompetence”.

A survey conducted in late April and early May by Pew found that support among evangelicals for Trump’s handling of the coronavirus pandemic, while still strong, had slipped by 6 percentage points.