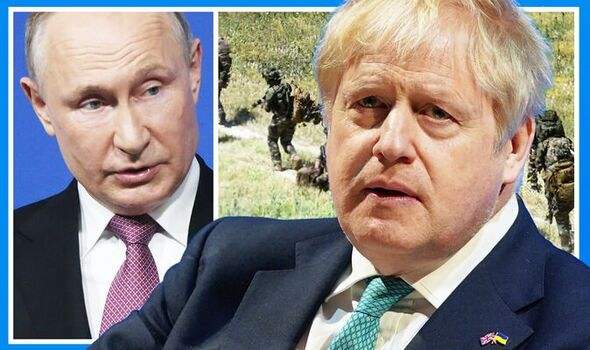 The Prime Minister was told there was a “wide consensus” among Tory backbenchers about the wisdom of such a move. John Baron, chairman of the Conservative 1922 Defence Committee, offered his forthright analysis of the situation following the publication of a report compiled after a “call for evidence” in March and April.

Conservative backbenchers were invited to make submissions for their priorities for defence, which were subsequently discussed by the committee.

Mr Baron, a former Captain in the British army and the MP for Basildon and Billericay said: “Across the Conservative backbenches there is a wide consensus that the Russian invasion of Ukraine requires an increase in defence spending alongside a broad reassessment of manpower and capabilities.”

“In particular, the report concludes that there should be a moratorium on defence cuts until this reassessment exercise is concluded.”

He added: “The report has been submitted to the Government and circulated around Conservative MPs.”

“We are looking forward to feeding its findings directly into the No 10 Policy Unit and to the Prime Minister. He would be wise to heed his backbenchers.”

The report concludes: “The UK faces multiple threats brought into focus by Russian aggression in Ukraine and China’s aggressive ‘belt and road’ programme.”

“Despite its positives, the IR radically reduces the size and capability of the UK’s Armed Forces while the threat from non-democratic rogue states is increasing, alongside those posed by sub-threshold and hybrid warfare.”

It was therefore strongly recommended that the conclusions of 2020’s IR and the Defence Command Paper be “revisited”, and the associated military cuts – to both manpower and capabilities – be halted immediately, with a threat-based, post-Ukraine review undertaken, supported by increased defence spending in real terms.

The conclusion added: “Diplomacy and soft power should always be the primary tools for achieving Britain’s desired outcomes, and they also require increased resourcing.”

“However, a comprehensive and well-resourced military instrument can help reinforce such means, while reducing the chances of armed conflict.”

“Recent events mean that defence will have a heightened relevance at the next General Election not seen since the ending of the Cold War.”

“The paper comes after reports that the Prime Minister has clashed with his Defence secretary Ben Wallace over military spending while Foreign Secretary Liz Truss has publicly said defence spending cannot remain at its current level.”

Speaking today, Ms Truss urged a meeting of G7 foreign ministers to maintain sanctions against Russia until it has fully withdrawn from Ukraine.

Ms Truss also implored western nations to provide more help militarily, saying: “Vladimir Putin is humiliating himself on the world stage. We must ensure he faces a defeat in Ukraine that denies him any benefit and ultimately constrains further aggression.”

“The best long-term security for Ukraine will come from it being able to defend itself. That means providing Ukraine with a clear pathway to Nato-standard equipment.”

Her remarks came after Finland’s leaders announced they support the country joining Nato, less than 24 hours after signing a new security pact with Britain.

The announcement followed Prime Minister Boris Johnson’s visit to Helsinki to sign a deal that would see the UK go to Finland’s aid, including with military support, in the event of an attack on the country.

Mr Johnson told a press briefing in the Finnish capital on Wednesday that the security deal will see each country “always come to one another’s aid”.