In Washington’s respectable circles, Michael T. Flynn, the former national security adviser, is a discredited and dishonored ex-general, a once-esteemed military intelligence officer who went off the rails ideologically and then was fired a mere 24 days into the Trump administration for lying to the F.B.I. about contacts with the Russian ambassador.

As if he cared.

Where others see disgrace, Mr. Flynn, 62, has found redemption. Recast by former President Donald J. Trump’s most ardent supporters as a MAGA martyr, Mr. Flynn has embraced his role as the man who spent four years unjustly ensnared in the Russia investigation.

He was one of the most extreme voices in Mr. Trump’s 77-day push to overturn the election, a campaign that will be under scrutiny as the former president’s second impeachment trial gets underway next week. Mr. Flynn went so far as to suggest using the military to rerun the vote in crucial battleground states. At one point, Mr. Trump even floated the idea of bringing Mr. Flynn back into the administration, as chief of staff or possibly F.B.I. director, people familiar with the conversations told The New York Times.

And now, safely pardoned and free to speak his mind, Mr. Flynn has emerged from the Trump presidency much as he entered it — as the angry outsider who pushes fringe ideas, talks of shadowy conspiracies and is positioning himself as a voice of a far right that, in the wake of the Capitol riot, appears newly, and violently, emboldened.

All that has changed for Mr. Flynn are the subjects at hand, and his apparent willingness to cash in on his notoriety.

Mr. Flynn’s dark view of Islam and eagerness to cultivate President Vladimir V. Putin of Russia have given way to an embrace of QAnon, the pro-Trump conspiracy theory, and a readiness to question the very fabric of American democracy. He has swapped a government job and an obsessive focus on “radical Islamic terrorism” for selling QAnon-branded T-shirts and a new media partnership with conspiracy theorists called Digital Soldiers.

Yet his underlying message remains much the same as it was back in 2016, when he was leading chants of “lock her up” at Trump rallies: Washington’s establishment is irredeemably corrupt, and real Americans — that is, supporters of himself and Mr. Trump — are wise to it.

“This country is awake,” he declared at the pro-Trump rally in Washington last month. “We will not stand for a lie.”

It was the night before a mob attacked the Capitol, and the crowd on hand in Washington’s Freedom Plaza — some of whom would take part in the coming violence — left little doubt about where Mr. Flynn stood.

With Mr. Trump now in his post-presidency at Mar-a-Lago, a loose coalition that draws together militia members and conspiracy theorists along with evangelical Christians and suburban Trump supporters is searching for direction. Call it the alt-truth movement, and if it is to coalesce into something more permanent, it may well be, at least in part, because figures like Mr. Flynn continue to push false claims of how a deep-state cabal stole the election.

“In order for us to breathe the fresh air of liberty, we the people, we are the ones that will decide our path forward, America’s future forward,” he said at the Jan. 5 rally. “It may not be a Republican Party, it may not be a Democratic Party, it will be a people’s party.”

Mr. Flynn, who did not respond to an interview request for this article, spent 33 years as an Army intelligence officer, earning a reputation for being outspoken and unconventional and, in the years that followed the Sept. 11 attacks, for being unusually good at unwinding terrorist networks.

Much of that work involved mapping out loose webs of ideological fellow travelers, figuring out who gave voice to extremist ideas and who committed the violence — two groups that were not always directly tied to each other. If a similar attempt was made to map the network of people who spread Mr. Trump’s stolen-election lie that led to the storming of the Capitol, Mr. Flynn himself would probably appear as one of those leading voices for his part in riling up Mr. Trump’s supporters without taking part in the attack.

Perhaps most responsible for Mr. Flynn’s re-emergence is the conspiracy-theorizing lawyer Sidney Powell. Ms. Powell took over his legal defense in the Russia investigation after he had twice pleaded guilty in a deal to cooperate with prosecutors, and charted a combative new path. She challenged the deal and, marshaling a small army of like-minded Twitter users, recast Mr. Flynn from a turncoat into a victim, a man who had taken the fall to save his son, who was also under investigation. 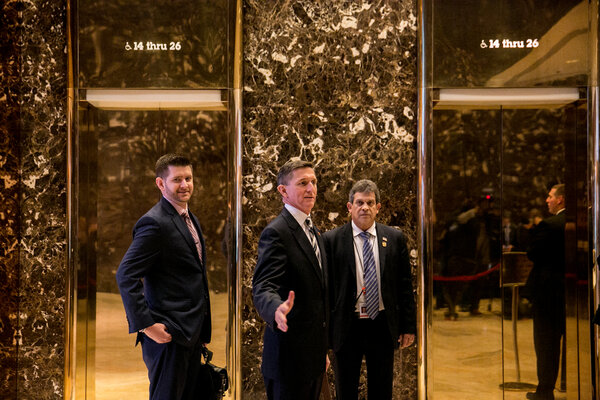 It was the story of the Russia investigation as a malevolent plot that first began priming tens of millions of Americans to believe Mr. Trump’s conspiracy theories about the deep state. As one of the heroes of that narrative, Mr. Flynn became an ideal messenger when it was refashioned into the demonstrably false claim that Democrats and their deep-state allies had rigged the election.

Within days of being pardoned on Nov. 27, Mr. Flynn began sharing those views in the right-wing media.

In some appearances, he described himself as a marked man. “I gotta make sure I’m a moving target, because these son-of-a-guns, they’re after me, in a literal and a figurative sense,” he told listeners of “The Matrixxx Groove Show,” a QAnon podcast.

In an interview with Newsmax, the conservative channel, he suggested Mr. Trump could impose martial law in swing states he had lost and rerun the elections.

“People out there talk about martial law like it’s something that we’ve never done,” Mr. Flynn said. He noted that the military had taken over for civilian authorities dozens of times in American history, though he did not mention that it had never done so to help decide an election.

The suggestion horrified many of Mr. Flynn’s former compatriots in uniform. Even discussing personal politics is frowned upon in the military, and most generals see it as their duty to stay above the political fray after retirement, as well. There have long been exceptions, of course, but to many who had served with Mr. Flynn, a retired general calling for the military to help decide an American election represented a new level of recklessness.

Throughout his military career, in fact, all most of Mr. Flynn’s fellow soldiers had known about his politics was that he was a registered Democrat. Then came 2016, and the sight of a retired general leading chants for the imprisonment of Hillary Clinton, a former senator and secretary of state.

When a number of generals privately and publicly urged him to dial back his support for Mr. Trump, Mr. Flynn called them “disrespectful.” If they could use their titles to get on corporate boards, he could use his to back Mr. Trump, he countered in an interview at the time, saying, “I care deeply about this country.”

In any case, he said, he had never really been part of their club.

Mr. Flynn has described his family as “definitely lower middle class,” and he joined the military without the West Point pedigree of many of his peers. He graduated instead from the Army’s Reserve Officer Training Program at the University of Rhode Island, a short drive from the town where he was raised.

Yet he rose to be a lieutenant general, among the most respected military officers of his generation. He helped reshape the Joint Special Operations Command at the height of the war in Iraq, and ran military intelligence in Afghanistan during the Obama administration’s troop surge. In 2012, President Barack Obama named him director of the Defense Intelligence Agency.

Then his career unraveled. After only two years, he was forced out when his attempt to reform the sprawling agency left subordinates squabbling and his superiors alarmed.

From Riot to Impeachment

The riot inside the U.S. Capitol on Wednesday, Jan. 6, followed a rally at which President Trump made an inflammatory speech to his supporters, questioning the results of the election. Here’s a look at what happened and the ongoing fallout: