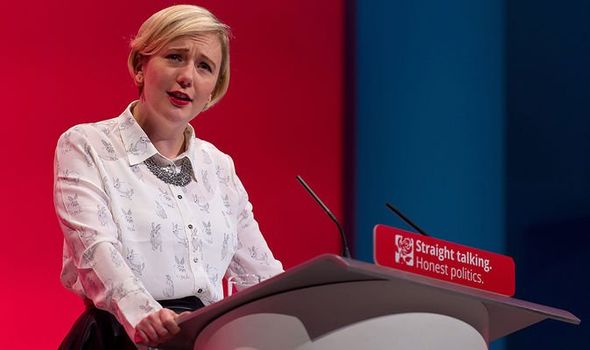 She hit out after being slapped with an official rebuke for carrying 13-week-old son Pip in a sling during a parliamentary debate.

Speaker Sir Lindsay Hoyle has asked a committee of MPs to review the rules.

But Tory MP Scott Benton questioned why she needed to bring her son to work.

He said: “Parents who get paid a fraction of what you do pay for childcare and juggle responsibilities so they can go to work.”

Sir Lindsay said it was “extremely important” for parents to be able to participate fully in the work of the House, which is why it had a nursery.

“Rules have to be seen in context and they change with the times,” he told the House.

He asked the Commons Procedure Committee to “look into this matter”.

The committee, chaired by Conservative MP Karen Bradley, makes recommendations on the practical operation of the House.

Ms Creasy said she hopes the move “means some of these rules will be reviewed to make parenting and politics possible to mix”.

The MP for Walthamstow, 44, has previously taken part in debates in the Commons while carrying one of her two children, and following the 2019 election was sworn in while carrying daughter Hettie.

But after appearing with her son at the adjoining Westminster Hall on Tuesday, she received an email from the private secretary to the chairman of the ways and means committee,

Dame Eleanor Laing, which said this was not in line with recently published rules on “behaviour and courtesies”.

She received the warning despite Pip being observed to be behaving “as good as gold” during the debate, during which he received praise from MPs.

Ms Creasy, who does not have maternity cover, told Sky News: “It’s a bit of a mystery to me because I have two children and I’ve taken them both previously into the chamber as needs must to make sure my constituents have representation.

“I think it’s representative of the way as a mum you can’t win because if I had maternity cover it would be a different issue, and I don’t and I don’t want to short-change my residents.”

Deputy Prime Minister Dominic Raab said he had “a lot of sympathy” for the Walthamstow MP, and politicians needed to make sure “our profession is brought into the modern world… [so] parents can juggle the jobs they do with the family time they need”.

But, while saying a baby in the Commons “certainly wouldn’t distract me or get in the way of me doing my job”, Mr Raab said it was for the House authorities to decide the “right balance”.

Boris Johnson’s official spokesman said the PM wants to see “further improvements” on making Parliament family-friendly, though any change to the rules was a matter for the Commons.

Labour leader Sir Keir Starmer’s spokesman said it would be inappropriate to comment while the Procedure Committee considered the matter.

In late September, Ms Creasy’s then-newborn was strapped to her as she rose in the chamber to ask Jacob Rees-Mogg to ensure new mothers were supported rather than “rebuked” when returning to Parliament.

The Commons Leader responded that the rules were “perfectly reasonable and entirely in line with the law”.

Former Liberal Democrat leader Jo Swinson was believed to be the first MP to take her baby into the chamber during a debate, when she cradled her son on the Commons’ green benches in September 2018.

Meanwhile, Leicester West MP Liz Kendall said she will be stepping back from her parliamentary duties and her frontbench role temporarily next year when she has a new baby through surrogacy.