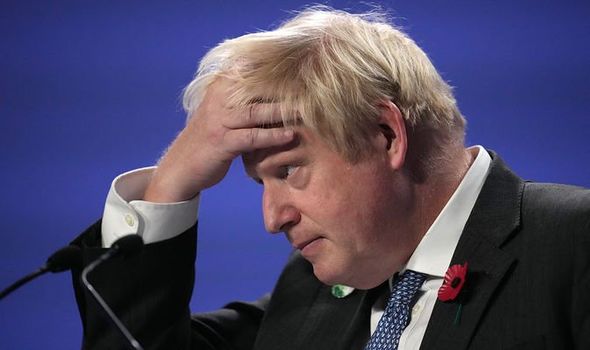 A Daily Express poll today reveals the anger raging over the Prime Minister’s handling of the Commons debacle. One in four people say they are less likely to vote Tory after this week’s furore, while two thirds (65 percent) agreed that the PM’s actions had led to a “loss of confidence” in the Conservative Government’s decision making.

Worryingly for Mr Johnson, spending this weekend at his Chequers country retreat, the OnePoll snapshot of 1,000 people revealed that voters want him to get a grip.

The Prime Minister has faced rising fury from inside and outside his party over the sleaze scandal.

It resulted in a notable Tory rebellion, forced him into a damaging U-turn over the future of MP Owen Paterson, led to him being accused of flirting with corruption and latterly to Mr Paterson’s resignation.

Tory MP Sir Charles Walker said last night that it was “not a great week for the Conservative Party, and a bad a week for politics”.

His fellow backbencher Peter Bone hit out at senior aides: “The people in No 10 don’t know how Parliament works and they have interfered and made a complete Horlicks of this.”

He continued: “But the public still think Boris is doing a good job. Whether it’s Brexit, Covid or the environment he keeps on delivering.”

Sources last night suggested that the PM is surrounded by “Yes men” in Downing Street.

While another fuming Tory MP told the Daily Express that Mr Johnson’s own leadership is now being questioned within the party.

He said: “[This week] does need to be a wake-up call and it’s not just taking voters for granted.

“It’s leadership, taking their own MPs for granted. There is a lot of personal affection within the party for the PM, but questions are definitely starting to be asked about where the leadership is coming from.”

The affair has led to some Tories pointing the finger of blame at Chief Whip Mark Spencer, but Downing Street aides insisted Mr Johnson had confidence in him and in the “excellent job” that he was doing.

Education Secretary Nadhim Zahawi said earlier yesterday that the Government had been wrong to combine ripping up the current Parliamentary standards system with reaction to Mr Paterson’s lobbying.

He said: “It was a mistake and I think it was right to come back very quickly to the House and say ‘Look we need to separate those two’.”

Aside from Mr Johnson’s handling of the situation, the by-election in Mr Paterson’s old seat of Shropshire North could prove a further headache for the Tories.

Labour and the Lib Dems will field individual candidates rather than a joint anti-sleaze challenger.

The rural constituency is considered ultra-safe for the Tories, with Mr Paterson having held it since 1997. But allegations of sleaze aimed at the party and its leadership are likely to feature strongly in the contest.

Our exclusive poll showed 55 percent of voters said Mr Paterson was right to have resigned as an MP, while 18 percent thought a 30-day suspension from the Commons, as first proposed, was enough.

Only three percent saw his paid private consultancy as acceptable.

Downing Street sources would not rule out the idea that Mr Paterson ‑ whose wife Rose took her own life last year ‑ may be given a peerage.

He said he will stop his work with Randox and Lynn’s Country Foods.

A No. 10 spokesman said: “I’ve seen the speculation on that; there’s obviously a formal process for peerages.” A Government source said no talks about elevating Mr Paterson to the Lords had taken place.

Tweeting about his future last night, Mr Paterson said: “Thank you to the many people who have sent their kind wishes to me and my family this week. At this difficult time, I will be stepping aside from my current consultancy work to focus on my family and suicide prevention.”

Sir David Lidington, Tory ex-leader of the Commons, said the farce had hit politicians’ reputations. The former MP also said the affair has “weakened the Government”, making it harder for Mr Johnson to win support from his MPs on unpopular measures.

The PM also faces questions over his own transparency record following a recent family holiday to a Tory peer’s villa near Marbella. He flew to the south of Spain with wife Carrie and son Wilfred last month.

An update on the register of ministerial interests revealed their accommodation was provided free of charge by the family of Zac Goldsmith.

Labour’s deputy leader Angela Rayner said this too should have been declared in the Commons’ register for members’ interests.

She has written to Parliamentary Commissioner for Standards Kathryn Stone, urging her to open an investigation.

But Downing Street insisted this was not necessary, with a spokesman for the Prime Minister saying: “The Prime Minister received hospitality from a longstanding friend who provided use of their holiday home.

“The Prime Minister met the transparency requirements in relation to this. He declared this arrangement in his ministerial capacity, given this was hospitality provided by another minister.”

Mr Johnson faced criticism at the time of his getaway on the Costa del Sol as it came while the Government was battling a cost-of-living crisis and fallout from rocketing gas prices. The PM has also come under scrutiny over funding of home refurbishments.