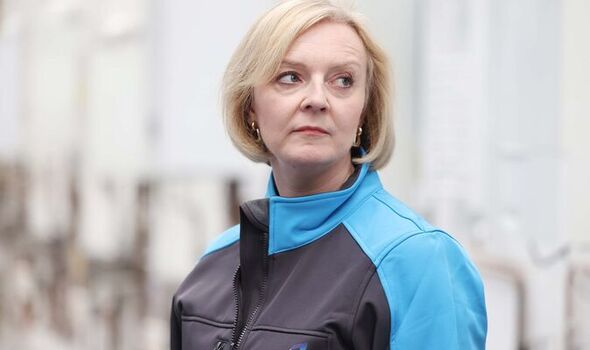 The pound rallied yesterday to almost erase the losses of the last week while official figures showed the economy defied expectations to avoid entering a recession. Financiers believe the worst of the market turmoil is over. And the Prime Minister said: “Daily Express readers should rest assured our plan will get us through. This Government is relentlessly focused on doing what it takes to create better jobs, boosting wages and funding vital services like the NHS.”

Earlier the PM and Chancellor Kwasi Kwarteng met with the Office for Budget Responsibility (OBR) in Downing Street in a bid to help calm fears on the financial markets.

Jitters were sparked by last week’s mini-Budget not being accompanied by an OBR report setting out the fiscal package’s costs and forecasts.

Ms Truss said the need to introduce the energy price freeze – which will mean a typical family’s bills come in at around £2,500 instead of a predicted £6,000 – meant she had to act quickly.

And that such a timescale precluded a full assessment. That report will now be published on November 23, along with the Government’s medium-term plans for bringing down debt.

Ms Truss said her “real priority” had been to “make sure we are working to help struggling families”.

She added: “We are also dealing with the economic slowdown, which is being felt globally, so that is why we had to act quickly in the circumstances.”

to deal with the costs that families are facing this winter.

A Downing Street source said: “The PM gets that the past week has been disruptive, but believes her energy plan is the right one for the country.

“Action on energy couldn’t wait – the human cost of not acting would have been enormous – and that was by far the biggest part of the fiscal package.We had to act on a huge scale and make no apologies for that.”

The Government insists economic strains are a global problem with interest rates at four per cent in the US and “sky-high” inflation in Germany.

Ms Truss and Mr Kwarteng have been in lockstep about the growth plans but the market reaction triggered claims of a rift, which insiders dismiss as “complete and utter nonsense”.

After a week of turbulence, the pound rose yesterday to almost wipe out losses following the mini-budget.

Sterling briefly rallied above 1.12 against the US dollar and was only marginally down by 0.06 per cent to 1.112 when European markets closed.

Rupert Thompson, an investment strategist at Kingswood, said “maximum panic is over”.

Scottish Secretary Alister Jack said the announcement of tax cuts should not have come as a shock. He said Ms Truss and leadership rival Rishi Sunak “argued that out over the summer”.

And he added: “[It] shouldn’t come as a shock to anyone when she said she believed the strategy was to be more of an Asian tiger economy, where you keep your higher spending but you grow your economy.

“And she said to do that she would be cutting taxes.

“To anyone paying any attention to that leadership contest it was plain as day what was going to happen.”

Former Business Secretary Andrea Leadsom agreed and said the “markets were wrong to be jittery” and they should not have been “caught out” as the plans were made clear by Ms Truss in her leadership campaign.

She added: “This is an unashamedly pro-growth package.

“Yes, the Government has made some big calls but that is going to set a very positive direction.”

In another boost after a difficult week, the Office for National Statistics said the economy grew in the second quarter of this year, despite previously expecting a contraction that would have put the UK into recession.

Economic output rose by 0.2 per cent between April and June. This is revised up from a previous reading of -0.1 per cent.

ONS chief economist Grant Fitzner said: “These improved figures show the economy grew in the second quarter, revised up from a small fall.

“They also show that, while household savings fell back in the most recent quarter, households saved more than we previously estimated during and after the pandemic.”

Samuel Tombs, chief UK economist at Pantheon Macroeconomics, said: “The downturn in economic activity during 2020 looks even worse than previously thought, and the subsequent recovery even weaker, following the latest set of national accounts revisions.”