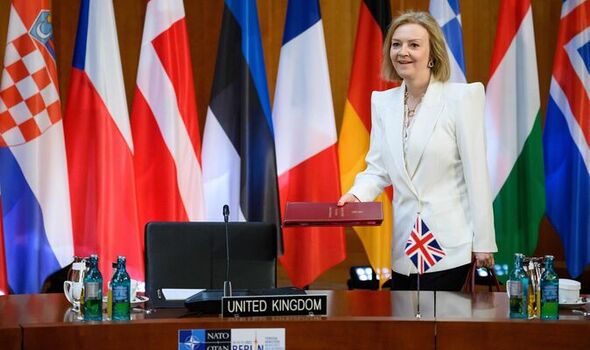 As well as protecting Euro-Atlantic security, the Foreign Secretary said the West must “watch out” for dangers in the Indo-Pacific region. Beijing and Moscow have previously strongly opposed the alliance’s expansion, calling it a weakening of global security. Her remarks came as Finland confirmed it will apply to join NATO despite Vladimir Putin warning it would be a “mistake” to do so.

A formal membership application is expected to be submitted to NATO headquarters in Brussels next week.

Finland’s membership bid is expected to be followed by a similar move from Sweden.

An expansion of the 30-country military alliance would be a blow to Mr Putin, who undertook the war in, what he said was, a bid to thwart its easterly advance.

Countries within the alliance are required to defend each other if any one of them is attacked.

The announcement came as a meeting of NATO foreign ministers took place in Berlin, where the Ukraine war and expanding the alliance were discussed.

Speaking at the meeting, Ms Truss said “there was strong support” for a “more global NATO”.

“At NATO this weekend, we agreed we must continue to help Ukraine win and push Russia out. Putin must face a sustained defeat in Ukraine, Russia must be contained and such aggression must never happen again,” she added.

“NATO’s open-door policy is essential and if Finland and Sweden decide to apply to join it is clear that they would strengthen the alliance and European security as a whole.”

Earlier, Ms Truss said the UK is “strongly supportive” of Finland and Sweden applying to join.

Former British Army officer, Ed Arnold told Sky News that if both countries were to join NATO it would be a “very significant moment”, especially in terms of how European security is set up.

He added that Prime Minister Boris Johnson has already signed joint declarations to make sure they are “secure in terms of applying to NATO and the ratification process, which will take a couple of months”.

On Saturday, Turkey raised objections to the two Nordic countries’ potential requests, saying both of them are “openly supporting and engaging” with the outlawed Kurdish militant group PKK and “terrorist organisation” YPG.

However, NATO’s deputy-secretary general Mircea Geoana said he was “confident” that the alliance will be able to address Turkey’s concerns and welcome all the countries to find “conditions for consensus to be met”.

“Finland and Sweden are already the closest partners of NATO,” he said, adding that he expects allies to view their applications positively.

German foreign minister Annalena Baerbock said her country and others have made it clear that they are willing to fast-track the national ratification process for Finland and Sweden.

“If these two countries are deciding to join, they can join very quickly,” she said.

Meanwhile, Denmark has dismissed suggestions that Mr Putin’s objections to Finland joining the alliance would hinder it from accepting new members.

“Each and every European country has a fundamental right to choose their own security arrangement,” he said.

He added that NATO will also stand with other countries, such as Georgia, which he said are being “instrumentalised” by Russia.