In a joint appeal, the ministers have issued a fresh attack on the Northern Ireland Protocol implemented as part of Boris Johnson’s Brexit withdrawal agreement. The pair blamed Brussels for introducing unnecessary bureaucracy that was having a damaging impact on livelihoods in the province.

Hefty paperwork has been introduced on goods travelling from Britain to Northern Ireland in red tape which the EU claims is necessary to protect the single market.

It argues goods could enter the EU via Northern Ireland and paperwork must therefore be implemented to ensure goods meet standards set by Brussels.

Lord Forst and Mr Lewis’s latest intervention comes ahead of a meeting of the UK-EU Joint Committee next week, when Britain is hoping to persuade the European Commission to show more pragmatism on the implementation of Brexit rules.

“We urge the EU to work with us to embrace a common sense approach, focused on genuine problems, not on mitigating against risks that don’t exist,” Lord Frost and Mr Lewis wrote in a Belfast newspaper. 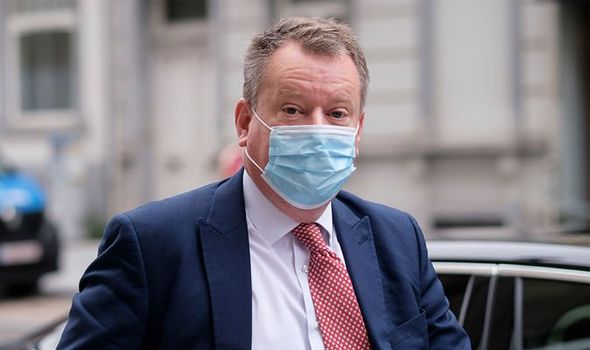 “Only if implemented in a pragmatic and proportionate way can the Protocol support the peace process and ensure the people of Northern Ireland continue to see the benefits of prosperity and stability.

“If it does not do this, then it is not working.”

Earlier this week Lord Frost travelled to Northern Ireland to see for himself the impact the Protocol was having on businesses and communities.

It was his second visit in under a month as he looks to better understand the consequences of the deal, which he is partially responsible for having been the UK’s Brexit negotiator for the Prime Minister when the withdrawal agreement was finalised.

Marcos Sefcovic, the European Commission vice president in charge of post-Brexit relations, and Joao Vale de Almeida, EU ambassador to the UK, have not visited Northern Ireland for themselves since the Protocol came into place at the start of the year.