EU member states are expected to confront Hungary’s Prime Minister Viktor Orban at a summit of leaders today over new anti-LGBTQ+ legislation. Denmark, Estonia, Finland, France, Germany, Italy, Ireland, Lithuania, Spain, Sweden, and Latvia have all joined the initiative of the Benelux countries and issued a joint statement expressing “grave concern” about the bill which “discriminate against LGBTIQ persons and violate the right to freedom of expression under the pretext of protecting children”.

The 14 EU countries also said the legislation “represents a flagrant form of discrimination based on sexual orientation, gender identity, and expression and hence deserves to be condemned”.

The countries said: “Inclusion, human dignity, and equality are core values of our European Union, and we cannot compromise on these principles.”

The Hungarian Government has argued the bill has been designed to “protect the rights of children”. 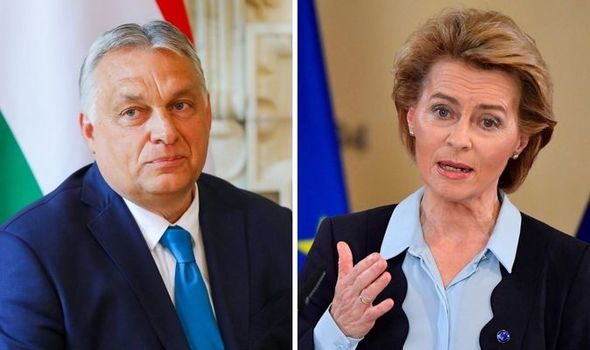 “The statement by the President of the European Commission is a shame because it is based on false allegations.

“The recently adopted Hungarian bill protects the rights of children, guarantees the rights of parents and does not apply to the sexual orientation rights of those over 18 years of age, so it does not contain any discriminatory elements.

“The statement of the President of the Commission is a shame because the Hungarian bill is based on Article 14 (3) of the Charter of Fundamental Rights of the European Union.

“The statement by the President of the Commission is a shame because it publishes a biased political opinion without a previously conducted, impartial inquiry.” 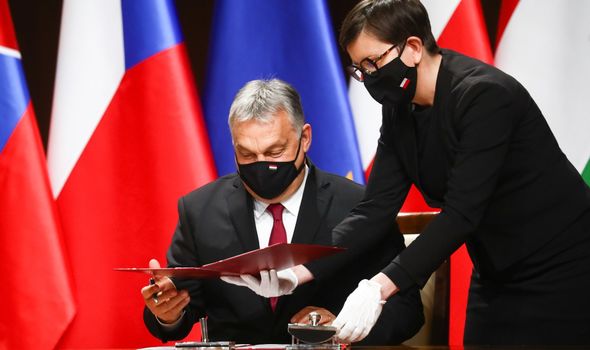 He said: “This law is not against any community in Hungary.

“On the other hand, the law protects the children in a way that it makes it an exclusive right of the parents to educate their kids regarding sexual orientation until the age of 18.

“So this law doesn’t say anything about sexual orientation of adults.”

The conflating of paedophilia with LGBTQ+ has rightfully drawn criticism from human rights groups and experts.

DON’T MISS
So much for friends! Fury as EU taunts UK for missing out on Covid [INSIGHT]
EU ambassador warns levels of trust with UK ‘low’ [REPORT]
Merkel and Macron plans EU-Russia meet after it ‘fired shots’ at Navy [INSIGHT]

What will happen now?

She said on Wednesday: “This bill clearly discriminates against people based on their sexual orientation.

“It goes against the fundamental values of the European Union: human dignity, equality and respect for human rights.” 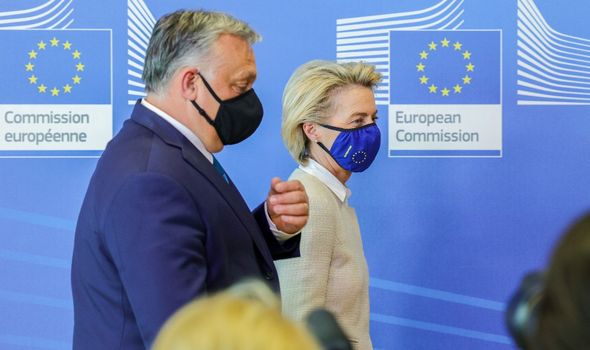 The commission has said the bill de facto equates homosexuality and transgender issues as being “on the same footing as pornography and are considered as capable of exerting a negative influence on the physical and moral development of minors”.

Hungary has been given until the end of this month to reply to the threat of legal action.

The EU has limited powers to amend domestic legislation but can sue member states that are deemed to have breached one of the institutions treaties.

Insiders said a host of EU nations are queuing up to use the summit today to challenge Mr Orban to withdraw the legislation before it is approved by the Hungarian president.

Hungary’s leader Viktor Orban has grown increasingly radical on social policy in a self-proclaimed fight to safeguard what he deems are traditional Christian values from the Western liberalism.

He has previously described the European Parliament as a “dead-end” for democracy, and wants to build a “democracy of democracies based on European nations”.

In practice, this would mean a reformed European parliament consisting of delegates from national parliaments, replacing the direct election of MEPs.

He faces an election next year, and has been Prime Minister since 2010.